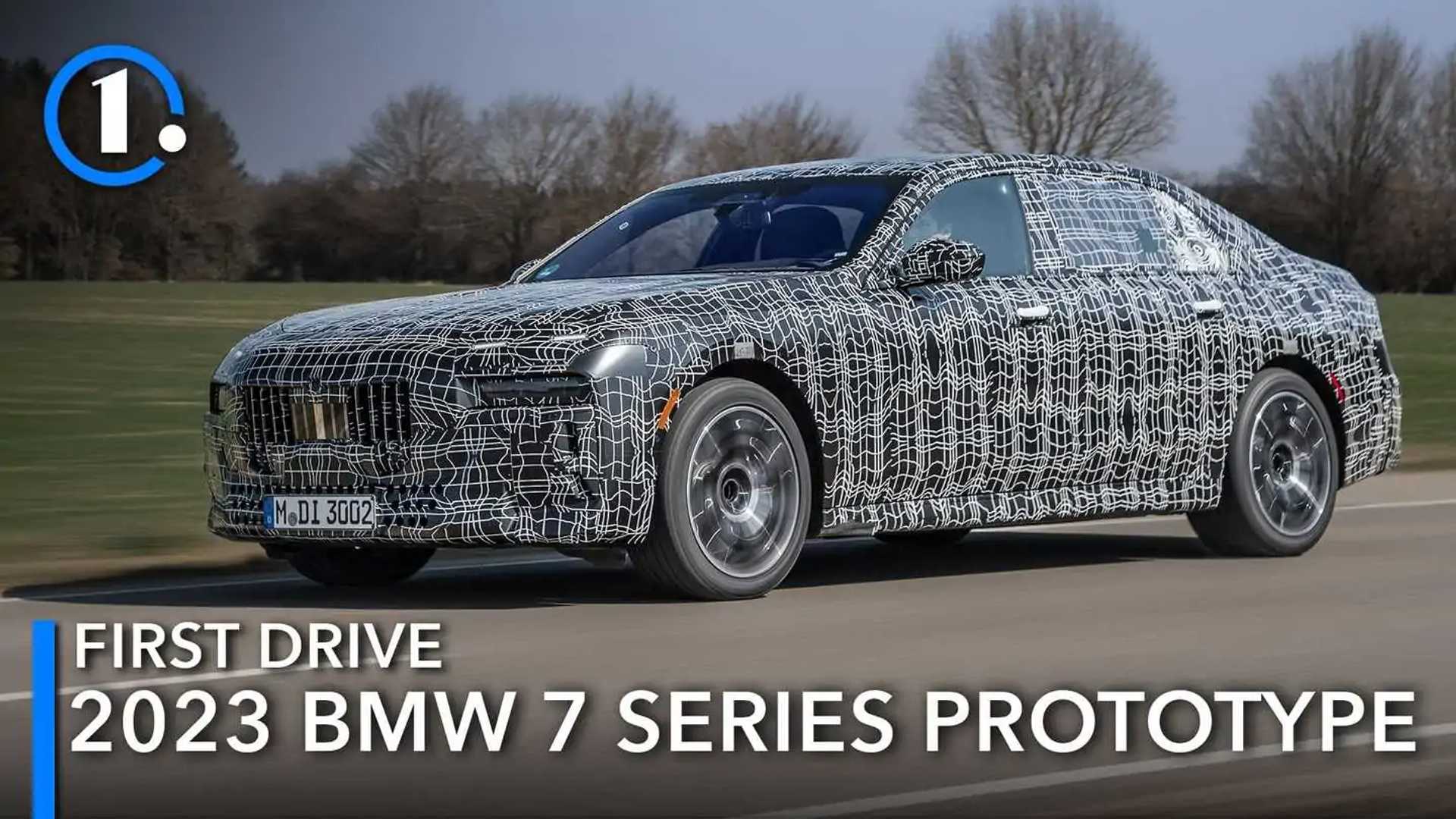 Even though the i7 is going to grab the most headlines when the new BMW 7 Series line debuts, don’t forget about the ol’ gas-powered version. This 7er remains in the lineup for 2023 alongside the EV and comes with a new mild-hybrid V8 powertrain. It will be exclusive to the US at launch, and as I found out recently, should pack a pretty significant punch.

BMW gave me the chance to sample an early camouflaged prototype of the new 7 Series at its remote testing facility in Munich. And again, while the electric i7 may still be the biggest draw for online commenters, the impressive V8 flagship is so good in this early test that it will be impossible to ignore.

The BMW 7 Series is new from the ground up, and with that comes a thorough redesign. As with the i7, the styling will be… polarizing. Even with camouflage covering most of the important bits on this prototype, it’s obvious the 7 Series will get the same horizontally split-headlight design and corresponding large-ish grille as other modern BMWs like the XM and facelifted X7. Thankfully, there won’t be any huge vertical kidneys like on the M3 and M4, so that’s good news.

As expected, this is a large vehicle – but it’s even bigger than before. BMW engineers tell me that the new 7 Series stretches out to around 213 inches in length and has a wider overall track, which makes for a sizable upgrade over the outgoing model. That makes the new 7 longer than alternatives like the Mercedes-Benz S-Class (208.6 inches) and Audi A8 (209.0 inches).

New suspension tech helps the 7 Series feel less boat-like on the road. A standard air suspension with adaptive dampers – borrowed from the Rolls-Royce Ghost – gives the 7 a sublime ride, and optional 48-volt active stabilizers ensure less body roll. And much like the technology introduced by Mercedes, the 7 Series can anticipate turns with a curve tilting function that leans the body in the right direction to counteract body roll and provide a calmer environment for passengers.

BMW engineers are coy on powertrain specifics. They simply tell me that there’s a V8 under the hood of this prototype, and as mentioned, this engine will only be available in the US at launch. The most likely and obvious candidate is BMW’s ubiquitous twin-turbocharged 4.4-liter V8 with a 48-volt hybrid assist from the M5.

And this V8 is powerful – it’s borderline unruly for a large luxury sedan like the 7 Series. In Sport mode specifically, the throttle response is EV-like quick, with a burst of nearly instant torque aided by that 48-volt hybrid setup and its integrated starter-generator. Paired to the buttery smooth acceleration of the gas V8, the 7 Series squeals its tires off the line like a certified performance sedan, and my butt dyno tells me this thing is quicker to 60 and beyond than the comparable S-Class or A8.

The advanced technology underneath the car helps shrinks the 7 Series around the driver – this vehicle definitely doesn’t feel like it’s 17 feet long. The steering is quick and precise thanks to an electric variable-ratio rack, the body stays flat courtesy of that active anti-roll mentioned earlier, and the addition of rear-wheel steering at a rate of up to 3.5 degrees makes the back end feel nimble than its length suggests.

On the Autobahn, the 7 Series glides confidently to 100 miles per hour. That V8 clearly has plenty of power to give at high speeds, with ample torque still on tap near the top of the rev range. A brave driver than I would easily be able to push this car past 150 and beyond. But more importantly, it’s comfortable as hell at these high speeds; the suspension floats over pavement and insulates driver and passengers alike from outside noise.

Jumping into the back seat of the 7 is further evidence of its expert levels of comfort. The legroom in the second row is palatial – even with the passenger seat in a normal position, the rear bench is insanely spacious and exceptionally comfortable. Its cousin, the Ghost, clearly gave it some good pointers in this respect.

BMW promises an optional 31.0-inch Theater Screen, complete with Amazon Fire streaming capability, in the second row of the 7 Series when it reaches production, a first for the brand. It’s absent for this early test, sadly, but sitting in the second row did afford me access to some smaller, equally neat technologies.

A smartphone-sized touchscreen lives in the rear door panel on both sides of the 7, allowing rear passengers to control features like climate, settings, and audio. The system is managed by the latest iDrive 8 infotainment system, which makes its way from the iX crossover to the 7 Series. The iDrive 8 setup consists of two large screens atop the dash, surrounded by a single continuous piece of glass that extends from the driver’s side of the dash to the center. The digital instrument cluster measures in at 12.3 inches while the central touchscreen is 14.9 inches.

Other technologies, like Level 2 Plus hands-off driving and the latest Remote Parking Assist also make their way to the 7 Series. I only got the chance to test those two technologies on the fully electric i7 – if you want to read up on them, head to that prototype drive.

The latest BMW 7 Series debuts on April 20, 2022, and it goes on sale in the US and other markets by the end of the year. We’ll know details like pricing and availability closer to that on-sale date. But with a fully electric model and a plug-in-hybrid joining the 7 Series range, there will be no shortage of options for buyers in the market.

But for the US specifically – at least, at launch – the V8 mild-hybrid might be the most interesting option. This is a sporty sedan with a powerful engine that delivers impressive dynamics for the size. And on the flip side, the 7 Series is a ridiculously comfortable cruiser with ample passenger space and loads of technology in the second row. BMW should have a winner on its hands.