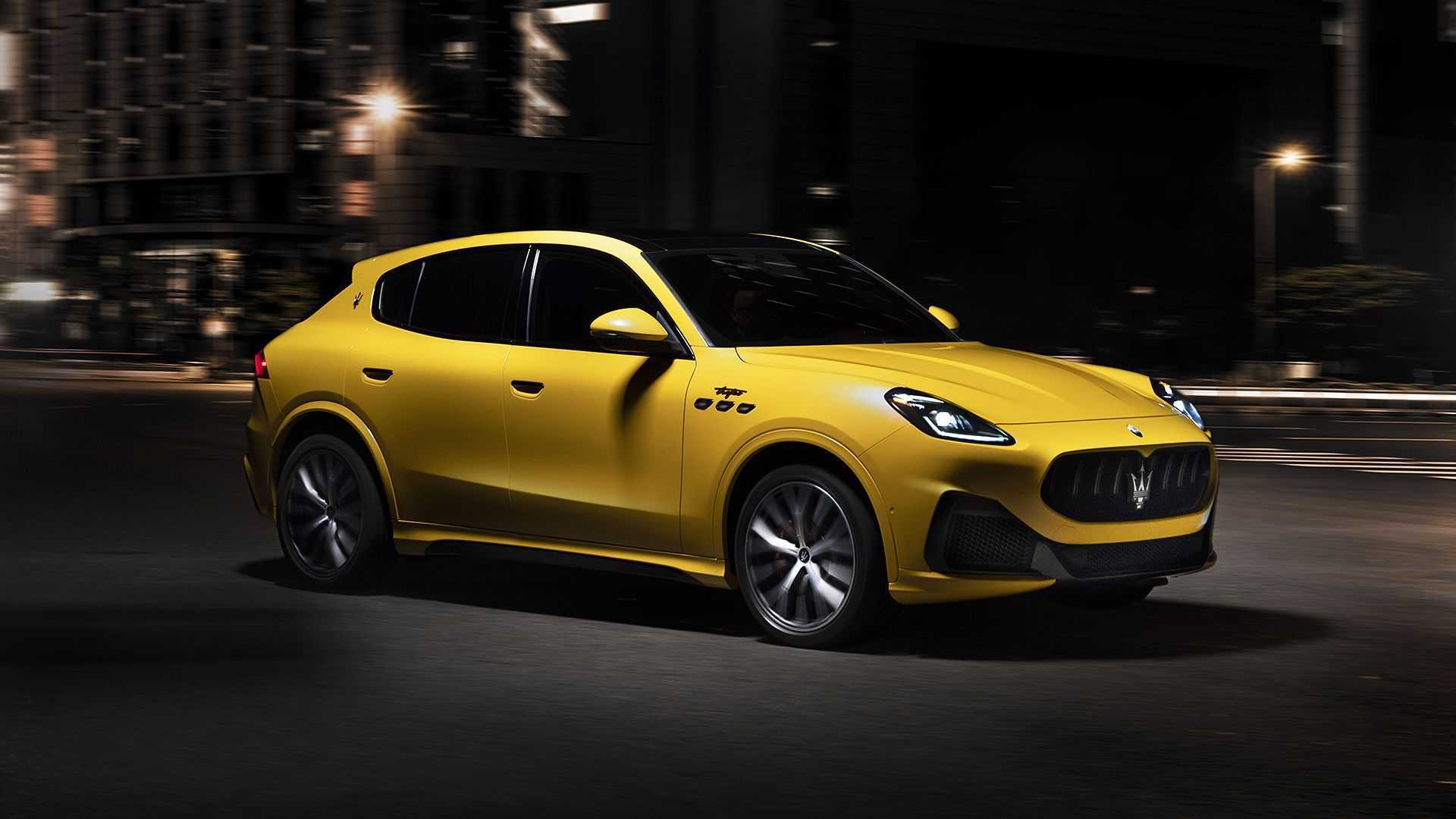 The MC20 is the most exciting model from Maserati’s new wave of products, but everyone in Modena believes the Grecale has the license to print money. At long last, the smaller crossover positioned below the Levante is here to take on the Porsche Macan. Following multiple teasers and a delay caused by the microchip shortage, the relatively high-riding vehicle with the Trident logo debuts in GT, Modena, and Trofeo flavors.

Named after a north-easterly Mediterranean wind, the Grecale with combustion engines is shown alongside the purely electric derivative part of the recently announced Forgole lineup. The EV will hit the market a year after the gas model with a similar look, save for a different grille with curved grille slats and aerodynamic wheels.

It looks properly sporty without being a Levante scaled down to 75 percent. Some had concerns it would look a lot like the Ford Puma because of some headlight similarities, but the Grecale has its own visual identity. It’s particularly fetching in the Trofeo guise with its wider air intakes part of an aggressive body kit.

The Grecale Trofeo has been engineered with an eight-speed ZF automatic transmission sending all that power to an AWD setup with a limited-slip electronic rear differential. The four-cylinder versions, also using an all-paw layout, have either an open mechanical or a limited-slip mechanical diff along with a different version of the eight-speed auto.

Speaking of lesser models, the entry-level GT uses a 2.0-liter turbocharged engine with mild-hybrid technology. It pushes out a still-respectable 296 hp at 5,750 rpm and 332 lb-ft (450 Nm) from 2,000 rpm whereas the Modena ups the horsepower count to 325 hp while retaining the same level of torque. The sprint takes 5.6 seconds in the case of the base model or 0.3s less for the midrange model. Both can do 149 mph (240 km/h).

Maserati is eager to share some preliminary specs regarding the zero-emission Forgole as well. Available in an exclusive Rame Folgore paint, the Grecale EV will come with a fairly large 105-kWh battery pack and will utilize 400V technology. Its electric motors will deliver a combined near-instant torque of 800 Nm (590 lb-ft).

On the subject of the interior, the Grecale is the latest example of cramming more screen real estate. You’ll be surprised to hear there are technically four screens. Aside from the obvious digital driver’s display and the pair of touchscreens on the center console, the clock is also a screen. The instrument cluster and upper touchscreen both measure 12.3 inches whereas the lower display has an 8.8-inch diagonal. The latter has swallowed the conventional buttons and knobs to control the climate settings.

Should you want an extra display, Maserati will sell its new crossover with an optional HUD, promising segment-leading viewing angles, contrast, and brightness. For more money, the Grecale can lose the standard 19-inch wheels for larger 20- or 21-inch sets. You can also go for a high-end 21-speaker Sonus faber sound system with 1,000 watts of power.

Europe will be the first region to get the crossover in the first half of the year, with the US, Canada, and select Latin American countries to follow this fall.

UPDATE: Maserati has shared preliminary US pricing for the 2023 Grecale, which starts at $63,500 for the GT. Available for a short while by making an online reservation, the Modena Limited Edition costs $77,400. Both prices exclude the $1,495 destination and handling fees.