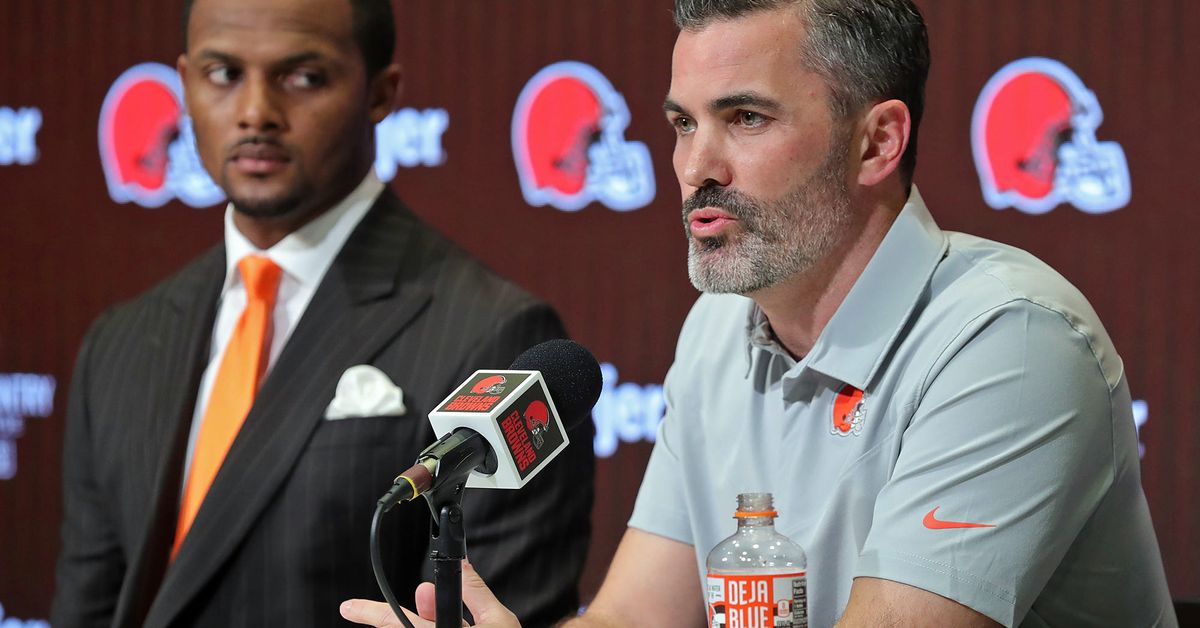 The Browns made it more official today with Deshaun Watson introduced as the new quarterback and team member in Berea. He was flanked by head coach Kevin Stefanski and GM Andrew Berry for much of the introductory presser appearing dapper in his brown suit with orange tie.

Not in attendance were owners Dee and Jimmy Haslam and any of the investigators that the club has hired to investigate the allegations against their new star player. The Haslams later participated in a Zoom conference call as they were out of the country.

The signing of Watson has divided the Browns fan base without a doubt. Many fans have simply given up on the franchise and found something else to do. Others, have embraced the very talented player with hopes that his signing will bring another championship to Cleveland. While others have pondered a “wait and see” attitude since Watson hasn’t actually ever been charged with anything.

The press conference came just off the heels of two grand jury hearings in which neither Texas court sought indictments regarding any criminal charges against him in regards to complaint and allegations from 22 different women, most of them massage therapists.

Watson still faces one more criminal charge which will be presented to one more Texas county grand jury soon. Next, the attorney for the 22 women has stated that their civil lawsuits will go on and each feels their allegations will result in victory.

Here at DBNwe have five takes on Watson’s first time in front of the Cleveland media.

1. Watson not only stated he was innocent of all allegations, but he repeated this quite a bit

Watson came right out and stated that he did not do or perform any of the acts or sexual battery that any of these women have portrayed. Then, he said it again. And later, again.

Not only did he repeatedly state he was innocent, his body language and tone was fairly forceful in his delivery.

“The things that are off the field now that came up, caught me by surprise because I didn’t do anything that these people are alleging,” Watson said. “… I never assaulted, I never disrespected and never harassed any woman in my life.”

There were many statements and questions asked, and then Watson came back with this:

“I understand the situation is very difficult, especially the women’s side of the fans in this community. I am not naive to that. These allegations are very, very serious. But as I mentioned before, I never assaulted any woman, disrespected any woman. I was raised by a single parent mom who has two auntees as her sisters. I was raised to be genuine. I have always defended that and I will always stand on that. I just the opportunity to show who I really am in the community.”

If you could find a single thing from Watson’s first press, it was that the player steadfastly and clearly stood by his claim that he is innocent.

“We feel very confident in Deshaun the person. We have a lot of faith in him and we feel that as he gets into the community he will have a positive impact. We think he’s one of the best players at the position in the sport. He’s in his prime and we think it’s the most important position. We do think this is a decision that when it is evaluated over the long run will be a-positive for our organization.”

Watson made it clear repeatedly that he has done nothing wrong.

2. Everyone realizes that sensitivity is Job 1

The Haslams were very focal about being sensitive to the fact that every bit of this is of sensitive nature.

That was also voiced by Stefanski and Berry.

One thing that was a huge concern after announcing that Watson was coming to Cleveland was the fact that there could be a huge exodus regarding season ticket renewals. Haslam actually explained the opposite is occurring.

The entire Browns organization seems to be on the alert for anyone in the community who may be bothered by a possible woman abuser leading the franchise. That was addressed more than once.

The Haslams made it very clear that they supported the idea of ​​trying to complete the trade for Watson despite the legal ramifications that are still ongoing. They mentioned they trust the legal system and fully support Watson’s legal team and the direction that is currently going regarding the pending 22 civil lawsuits.

“We put more time, more effort, did more research on this decision by far than any other decision we have made with the Cleveland Browns,” Jimmy Haslam said. “It is something we took very seriously and we feel comfortable with the process.”

Dee Haslam then shared her thoughts:

“This has been a difficult journey for us and for our family. We have spent a lot of time with our daughters and working through this as a family. We had to get really hard to get comfortable with the decision. We knew it would be really hard on individuals that could trigger emotions that had been through sexual abuse. Our compassion for those individuals is really deep.”

The Browns had a brand new toy which was replacing the brand new old toy. Yet, the ambience was serene amidst huge national and local network coverage.

Keep in mind, Watson hasn’t been in front of a barrage of cameras for almost two years. Maybe, he was rusty or perhaps he is just that solemn when approached in mass. Whatever the case, the whole atmosphere was depressing.

It appeared that quite a few questions his attorney had instructed him to not say anything damning to his upcoming cases. Happiness introducing the highest paid player in the league just did not come through from anyone.

4. The situation with Watson, regardless of the outcome, will likely continue to linger

Once the Browns hit the field and actual games are won and lost, each week the media will be talking about Deshaun Watson and whichever allegation he will have to face in the following months.

These allegations may not fester, but they will certainly linger.

And certainly the Browns are hoping that this time around, they have the right guy to take them deep into the post-season. And for $230 million, they better be. Watson is an exceptional athlete, but as long as the cases are open and pending, this will the news that will surround the Browns the entire season.

But after the presser, it is doubtful that what was said is going to change any fan of their position in this matter at this time. There wasn’t any moments that suddenly made anyone more comfortable with Watson being the new leader of the franchise.

Many questions were dodged very well and didn’t exactly represent what needed to be said or revealed.

5. The one question that needed to be asked finally was, “Why so many massage therapists?”

Almost four minutes in, Watson was finally asked what a lot of people have been wondering anyway.

Most athletes prefer to have only a few people touch their bodies whether it is medically-based or for muscle toning and the likes. Athletes get massages all the time. And like a good auto mechanic, when you find a good one, you stick to that source.

But Watson apparently used 40. And 22 of that number have filed sexual allegations on him. Why so many?

Did that answer it? Not in the least. Makes no sense actually. Can you not imagine a place that wants pro athlete business, who pays well and pays on time, and they cannot move around other clients for a player like the franchise quarterback of the local NFL team?

It just didn’t appear to be a straight-forward answer at all. And it’s not like Watson didn’t have the time to ponder what to say once he was asked. And then, what was all he could come up with? Maybe he wants to make it seem that there isn’t a good answer to the question.