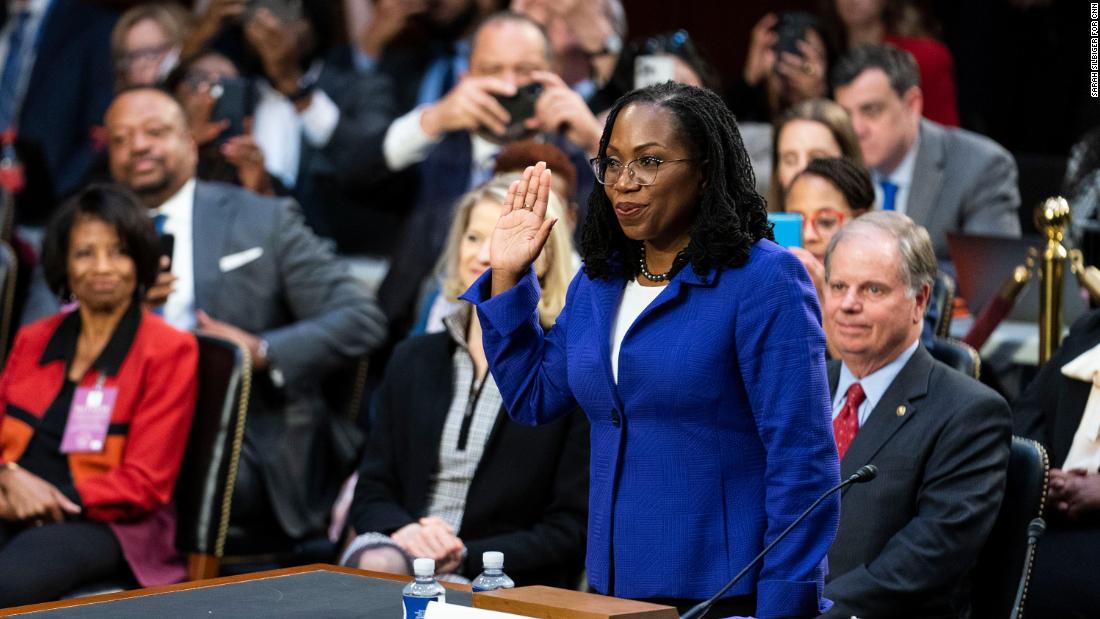 Jackson’s opening statement touched on her humble background and the gratitude she felt toward those who have boosted her legal ascent. She and her supporters emphasized the “independent” approach she brings to the bench, while Senate Judiciary Committee Democrats argued her confirmation will make the high court more reflective of the country it serves.

While they had previewed the parts of Jackson’s record they intend to scrutinize, Republicans launched a series of broadsides against Democrats for how they’ve handled the confirmations of GOP nominees.

Much of Jackson’s opening remarks were weighted toward her upbringing, and the gratitude she felt toward her parents as well as her faith.

As she affirmed her “thanks to God,” she said, “First of my many blessings is the fact that I was born in this great Nation” in 1970, in the decade after Congress passed two major civil rights bills.

Her name, “Ketanji Onyika,” means “lovely one,” she told the committee — an expression of her parents’ “pride in their heritage and hope for the future.”

She recounted the interest in law she developed from watching her father study law, while praising the “excellent mentors” she had in high school and in the judges that she clerked for.

“Justice (Stephen) Breyer not only gave me the greatest job that any young lawyer could ever hope to have, but he also exemplifies what it means to be a Supreme Court justice of the highest level of skill and integrity, civility, and grace, ” she said, referring to the justice she both clerked for and would replace if confirmed.

“It is extremely humbling to be considered for Justice Breyer’s seat, and I know that I could never fill his shoes,” she added. “But if confirmed, I would hope to carry on his spirit.”

Jackson vows an ‘independent’ approach to law, which supporters echoed

Jackson said she took “very seriously” her responsibility to defend the Constitution and her “duty to be independent.”

“I decide cases from a neutral posture,” she said. “I evaluate the facts, and I interpret and apply the law to the facts of the case before me, without fear or favor, consistent with my judicial oath.”

That description of her approach comes as Republicans have criticized her refusal to align herself with a specific judicial philosophy, like originialism or pragmatism.

On Monday, a prominent conservative judge vowed for how she approached her role as a jurist.

“Judge Jackson is an independent jurist who adjudicates based on the facts and the law and not as a partisan,” said retired Judge Thomas Griffith, a Republican appointee who served on the US Court of Appeals of the DC Circuit. “Time and again, she has demonstrated that impartiality on the bench.”

Democrats repeatedly reminded their public audience of the high stakes of these confirmation fights, referencing the major cases before a Supreme Court that is dominated by conservatives as they sought to connect the historic nature of Jackson’s nomination to the public’s faith in the court.

As is common in these hearings, Democratic senators touched on legal issues that resonate with their base — with allusions to Supreme Court cases dealing with health care, abortion rights, gun control and the environment.

“The American people, our constituents … and their faith in the courts, that’s central to our democracy,” said Sen. Patrick Leahy, a Vermont Democrat. “They lose their faith, then democracy loses. The decisions made in our courts — and ultimately in the Supreme Court — affect the daily lives of each one of us.”

Because Jackson, if confirmed, will replace a fellow liberal, her appointment on its own likely won’t change the 6-3 conservative-to-liberal vote count on those various issues. But Democrats stressed other ways that Jackson — through the demographic and professional diversity she’d bring — will give the court new perspectives and enrich the confidence that Americans place in it.

“If you’re confirmed, we’ll take another step towards making our government better reflect the America that it serves,” Sen. Alex Padilla, a California Democrat, said.

Several Democrats touted her background as a federal public defender, a first for a justice, and how it helps her “understand our justice system uniquely, through the eyes of people who couldn’t afford a lawyer,” as Sen. Richard Blumenthal, a Connecticut Democrat, put it.

Republicans focus on the treatment Kavanaugh received from Democrats

It was more than three years ago that Supreme Court Justice Brett Kavanaugh was confirmed after a tumultuous and high-octane set of hearings that tested the Judiciary Committee’s relationships. But despite time, their victory and subsequent confirmation of another conservative justice, Republicans made clear Monday they can’t see Jackson’s nomination without the context of Kavanaugh’s.

Despite the fact that Republicans have pledged to sixteen on her past writings, rulings and awards, nearly every Republican member of the panel pledged to draw a line.

“No Republican senator is going to unleash on you an attack about your character when the hearing is virtually over,” Sen. Lindsey Graham of South Carolina said in his opening statement, alluding to how it was late in the process when allegations against Kavanaugh were revealed.

“None of us, I hope, have been sitting on information about you as a person for weeks or months. You come into our offices and we never share it with you to allow you to give your side of the story. We wait to the very last minute when the hearing’s about to be gaveled, concluded, and say, ‘Oh by the way, I’ve got this letter.'”

“I can assure you that your hearing will feature none of that disgraceful behavior,” Cruz said. “No one is going to inquire into your teenage dating habits. No one is going to ask you with mock severity, ‘Do you like beer?’ But that’s not to say this hearing should be non-substantive and non-vigorous.”

Lawmakers hint at where their questions for Jackson will go

Amid the swipes taken at Democratic tactics in past confirmation fights, Republicans gave a preview of what their questions for Jackson will explore.

Several senators remarked they wanted more clarity about Jackson’s judicial philosophy, an area that senators like Missouri’s Josh Hawley told CNN they probed in a private meeting with Jackson but still didn’t have clarity about.

“What she told me is she doesn’t consider herself to have a judicial philosophy. You know, I don’t know if I buy that,” Hawley said.

Hawley also previewed a line of questions about how Jackson had sentenced a series of child pornographers who came before her when she was a federal district court judge.

Sen. John Cornyn of Texas said that he was “troubled” by Jackson’s advocacy on behalf of Guantanamo Bay detainees and the arguments Jackson “made representing people who have committed terrorist acts against the United States and other dangerous criminals.”

In what was perhaps the harshest opening statement from a GOP senator, Tennessee’s Marsha Blackburn suggested that Jackson had a “hidden agenda” that needed scrutinizing, as she listed vague concerns about critical race theory, school mask mandates and letting “violent criminals, cop killers , and child predators back to the streets.”

Other Republicans argued that they wanted Jackson to provide clear answers on her position on a litany of policy issues and the future of the court, include the push by the left to expand the number of justices. That’s an area that formed Democratic Sen. Doug Jones of Alabama, who has played the role of Jackson’s “sherpa” on Capitol Hill, said Jackson isn’t likely to answer.

“Everyone understands that the size of the Supreme Court is an issue for this body, for the Congress. It is not for the court, and I don’t think you will see any nominee address that,” Jones said.

Still, the opening statements provided a roadmap for Jackson’s team, with Monday offering one of the first public opportunities Democrats had to see where Republicans would take this confirmation hearing.

“There’s gonna be some very pointed questions about her record. That’s what the senators are there for. She will be prepared,” Jones said.