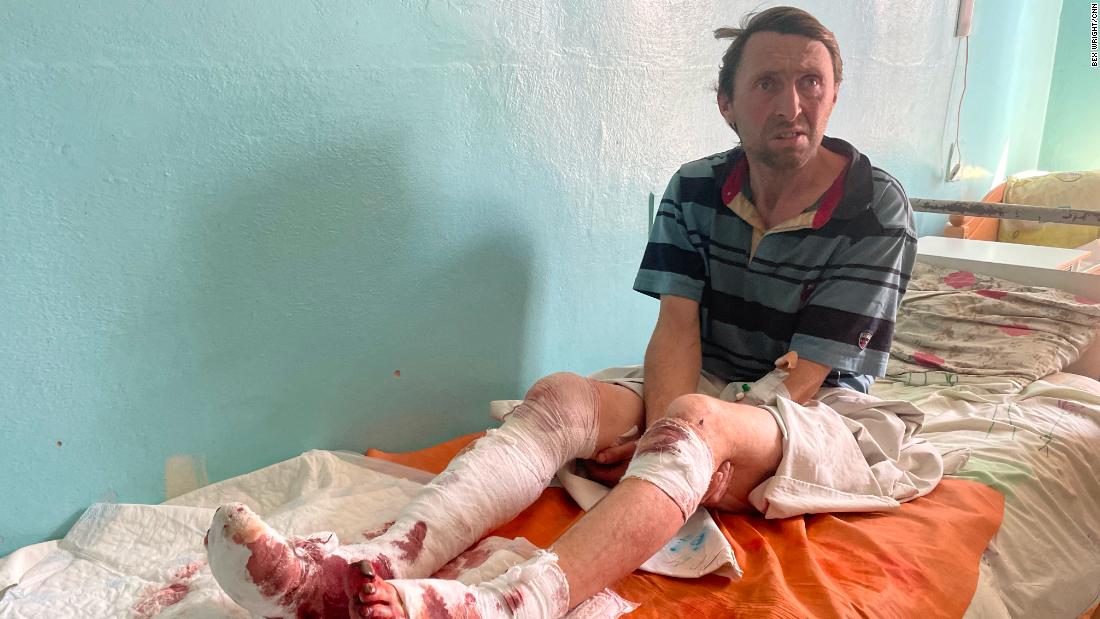 His elder brother Andriy Mulyar, who roasts coffee for a living, was standing next to him when it happened.

“A shell hit, from the — so-called — liberators. I was by his side,” Andriy, 48, said. “We tried to get him to the hospital, but he died along the way. He left behind three kids.”

Now, Andriy has to inform Dmitry’s children, aged 7, 9 and 15, about their father’s death.

“I wish that everyone responsible for this war, who are attacking our weak, a country that never has hurt anyone, (they should) be cursed forever,” Andriy said. “These aren’t people. They aren’t even animals.”

The Russian invasion of Ukraine has wrought a heavy toll on civilian life, with Russian bombs destroying villages and residential homes, schools and hospitals.
Russia’s President Vladimir Putin insists that his troops only target military facilities.

But the steady stream of casualties arriving at the Brovary Central Hospital in Kyiv told a different story. It is the only hospital close to the recent heavy fighting east of the capital.

“Every day brings fresh trauma patients,” said Dr. Jaroslav Zraitel, 37, an orthopedic surgeon at the hospital. “We didn’t expect this and cannot do anything about it. All we can do is try to sleep and eat between operations. Every day we are living here, day and night we are here.”

Zraitel’s team has now become accustomed to performing surgery despite the thunder of explosions nearby.

“(In) the first week, we’d hide for several hours when we’d hear the blasts,” Zratiel said. “Now we are just waiting to hear the siren, and if there are no explosions then we just continue with our work.”

While he lives and works at the hospital, Zratiel’s own wife and children have been evacuated to a town called Rivne, in the relative safety of western Ukraine.

“It’s still difficult when there are many wounded, especially children,” he said. “The morality of it all begins to take a toll, not to mention that we are physically worn down.”

Now, evacuations of civilians have started from villages east of Kyiv, but by the time they arrive at the hospital, many of them have endured bad injuries for days without treatment.

“There are people who have been injured for a day, two days or even a week,” Zratiel said. “We even had people who sat in the basement for 10 days with such wounds and bandaged their legs themselves.”

Vasyl Khilko, a builder, had to hide in a basement in his village in eastern Kyiv for two days after he had his right leg blown off by a drunk Russian soldier with a stolen shotgun, his family said.

“We started stopping the blood flow and giving first aid,” said his wife Zina, 62, adding that they were lucky as she is a trained midwife and their neighbor is a nurse. “We applied a splint, injected antibiotics, (and) punctured the wound.”

The Russian troops occupied their village on March 8, Zina said, and seeing them at close quarters showed the chaos and desperation in the ranks. They looted their homes for clothing, food and alcohol, and often got drunk and abused the residents.

“They wore my women’s coat, my hat, my boots. They wore our clothes. They took our bedding,” she said. They also stole their money and her laptop where she kept precious photos of her grandchildren, Zina said.

There was disagreement among the soldiers, Zina said, with three of them eventually taking pity on the Khilkos and helped to evacuate them to get medical attention.

Now, as her husband lies in pain in his hospital bed, Zina is regretting their decision to stay at their home.

The decision to stay or go is one that keeps families awake at night across Ukraine. But for the most vulnerable in society, they often do not have the resources or option to leave.

Igor Rubtsov, who has been homeless for more than a decade, said he was hit by shelling when he was feeding stray cats and dogs on the street where he lives in eastern Kyiv. Originally from Russia, he came to Ukraine in 1993.

“In the morning there was a sudden noise,” the 48-year-old said. “They started shooting at Ukrainian positions. I just had time to run.”

He was hit in the legs by the shelling, he said, and fell to the ground as fighting continued around him. “Thank God that I fell, otherwise my head would have fallen off,” he said.

Rubtsov said he had to walk about a mile (1.5 kilometers) with his injury before he found help. “It was so fast,” he said. “I was falling, it was hard, I felt dizzy. But I had to get to the ambulance somehow. I did not want to die.”

As those with life-changing injuries start their road to recovery, the Mulyar family have only grieving ahead of them. They also need to decide whether to stay in their village with the bees that they keep, or evacuate to a safer place.

“I will speak to [my brother’s] wife, and if she wants, I will get them out,” the brother, Andriy Mulyar, said.

He said the world should use their family’s story as a warning to act. “I appeal to all of Europe to help the citizens of Ukraine,” he added. “Help as much as possible. The (Russians) aren’t going to stop here, God help us.”