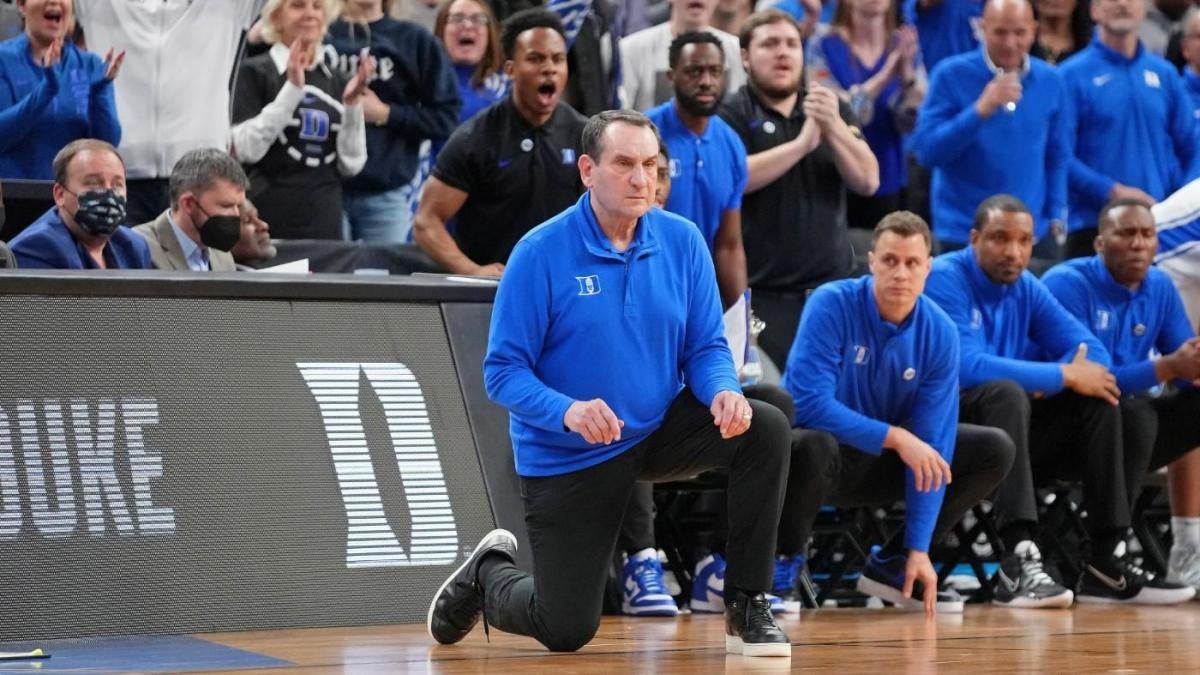 SAN FRANCISCO — On Saturday in a gleaming palace built for basketball that they call the Chase Center, Mike Krzyzewski will coach in his 1,437th college game. What awaits? Glory or defeat?

No. 2 seed Duke is a win away from making the Final Four and sending Krzyzewski there for the 13th time. With a win over No. 4 seed Arkansas, Krzyzewski would break the tie for most Final Fours in a career with the legendary John Wooden.

“The Final Four is mecca for player and a coach,” Krzyzewski said Friday. “It’s just — there’s nothing like it.”

The Blue Devils (31-6) will face up with the Razorbacks (28-8) in a matchup nearly three decades in the making. The last time Duke and Arkansas played it was on a stage bigger than this: the 1994 national championship game. Arkansas won its only title. Eric Musselman has the Hogs in the Elite Eight for a second consecutive season, a feat last accomplished at the school by those 1994 title-winning Razorbacks, who pushed to the Elite Eight (and then the Final Four) a year later. If Arkansas ends K’s career, it would double as the seventh Final Four run in program history.

Krzyzewski opened up a bit on Friday. He shared that, following the home loss to North Carolina to close the regular season (by the way: everyone sees UNC vs. Duke for the first time in NCAA Tournament history, right around the corner, looming like a brontosaurus), subtle but needed changes were made. It’s those changes that allowed Duke to grow and, in essence, got them to a Saturday evening in San Francisco with a chance to go to the Final Four.

“During those ten days I learned something, and I saw my team hurt,” Krzyzewski said. “Not just by a loss, but by a whole bunch of things. I just had a good meeting with myself. I said that, ‘I’ve got to do something.’ I’ve got to help in some way, and part of it was my approach with them.”

Things like this: The NCAA Tournament provides halftimes that are about five minutes longer than what teams have during the season. So, instead of addressing the good and the bad immediately when the team convenes in the locker room, Krzyzewski has been playing it loose.

“I’ve never done this before, but at Michigan State and again last night when I come in the locker room, I just pull out a chair, and I sit with them for about five minutes and just, okay, here’s where we’ re at, and just talk to them,” he said.

You could even sense some regret from Krzyzewski in how he handled losing to UNC, and his addressing of the crowd — telling everyone to “please, be quiet.”

“I saw my team, I felt really bad for them,” Krzyzewski said. “I felt really bad that we lost. When I said ‘unacceptable,’ it wasn’t that they were unacceptable. It was the result was unacceptable, and I wanted to make sure that that was not misconstrued by them, and so we’ ve kind of — it’s part of growing together, growing up, and I take responsibility for that.”

Had this Duke team been constructed with a different set of personalities, they wouldn’t have responded the way they have. There is faith, confidence, intelligence and emotional trust. Duke had nearly a week between its demoralizing home loss in K’s final home game and the start of the ACC Tournament. Without a game to play, the gap created enough of a crevice for the coaches and players to burrow into and carve a new course for the season.

That has been evidenced in how Duke has transformed itself in terms of execution and composure down the stretch of every win since.

In postseason play, Duke has become a monster when the game is hanging in the balance. The team has been trailing or tied in the closing minutes of four of its five games in the ACC and NCAA tournaments. Against Syracuse, Miami, Michigan State and Texas Tech, the Blue Devils have collectively responded by winning those four games by outscoring those four teams 57-22.

On Thursday vs. the Red Raiders, Duke made its final eight shots in the closing 8:25 of the game. An outrageous doing against the No. 1 defense in the country. There aren’t many bugaboos for Krzyzewski to shake 47 years into a career, but Duke’s win over Texas Tech did signal the program’s first NCAA Tournament win in the Pacific Time Zone — ever.

“Jon Scheyer said it yesterday when we were together as a staff, even before the game,” Krzyzewski said. “He said, ‘You know, Coach, this is as good a group as we’ve had as far as getting along.’ They are really a good group of kids, and they’re becoming men, and it’s — how lucky am I?”

“Very few people cross that bridge and so I’ve been able to cross it with my teams 12 times, and to cross with this team would be an amazing thing for me, and I know what’s on the other side of the bridge. They don’t. They can only look at it. So it makes me want it more for them.”

It’s outrageous. But in a tournament that’s seen 15-seed Saint Peter’s do the unprecedentedthat’s seen Miami make its first Elite Eight in school history, that’s offered up as varied of an Elite Eight as we’ve ever seen, don’t go thinking Duke is automatically strolling through like some sort of shoo-in for NOLA.

The Blue Devils will get an Arkansas team that won’t be intimidated, not even a little. The Razorbacks’win over No. 1 overall seed Gonzaga on Thursday made this team the first in history to knock off a No. 1 seed in the NCAAs and get a regular-season win over an AP No. 1 team (Auburn, in February). Saturday is going to be a battle. That battle will be fought to earn passage over what Krzyzewski refers to as the “bridge.”

The bracket’s construction has a big lurch between a regional final and the national semifinals. Again, we’re talking about hoops mecca here. To get there, you need a link.

“Very few people cross that bridge,” Krzyzewski said, “and so I’ve been able to cross it with my teams 12 times, and to cross with this team would be an amazing thing for me, and I know what’s on the other side of the bridge. They don’t. They can only look at it. So it makes me want it more for them.”

One win away from a matchup that would be for the ages, no matter who walks across the bridge to face Duke. It’s either the all-time David-vs.-Goliath in sports history — Duke vs. Saint Peter’s, mercy, mercy! — or Duke vs. North Carolina on a Final Four stage for the first time in the rivalry’s history with Krzyzewski’s looming retirement ratcheting up the stakes higher than they ever have been or could ever be again.

It’s almost too much. It’s almost too perfect. Before we can get there, we’ve got something to settle in San Francisco. Let’s see if Duke has another level to show us all, or if Arkansas can play the spoiler and cinch up another win over Krzyzewski, 28 years since the last one.