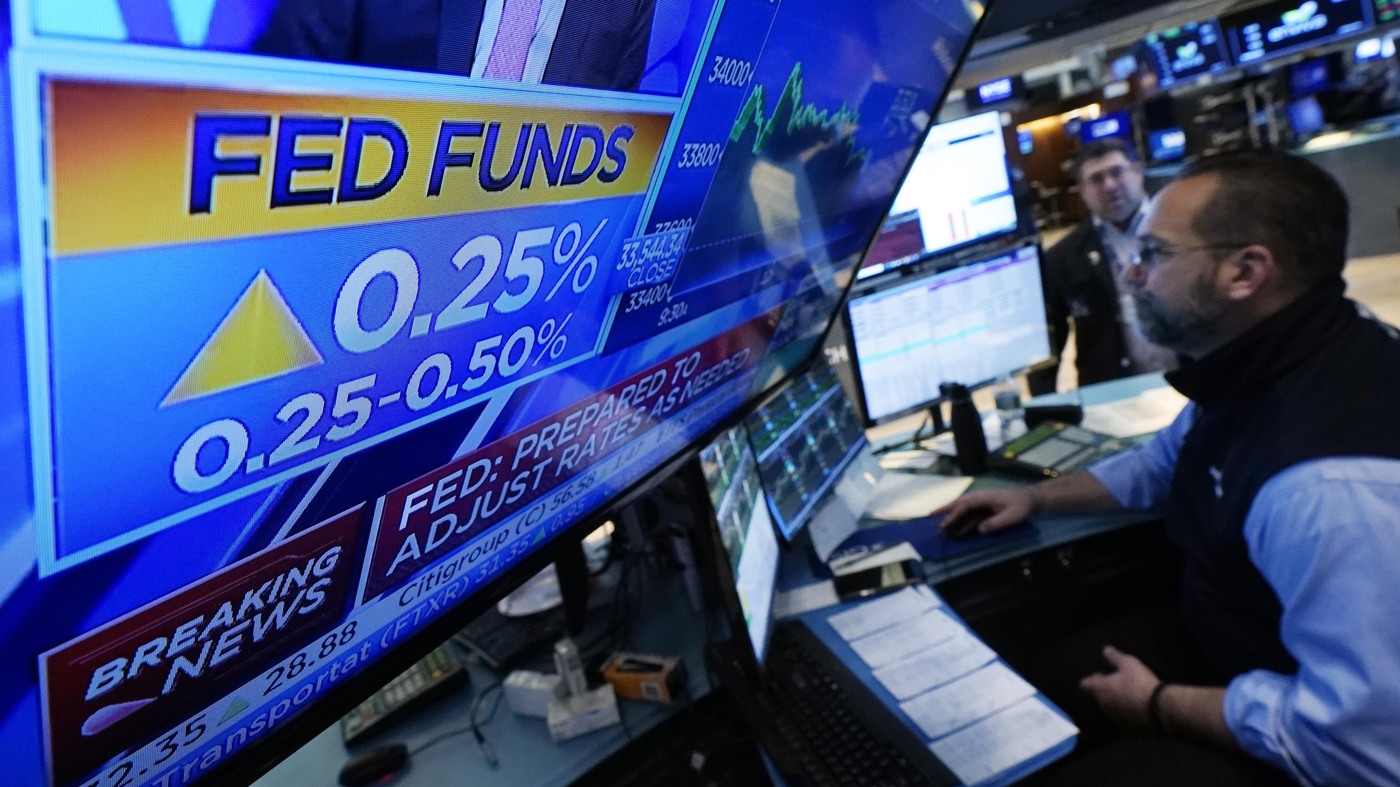 The floor of the New York Stock Exchange this week, after the Federal Reserve announced a quarter-point hike in its key interest rate. The Fed is raising rates to curb inflation, but that will hit some Americans in their wallets.

The floor of the New York Stock Exchange this week, after the Federal Reserve announced a quarter-point hike in its key interest rate. The Fed is raising rates to curb inflation, but that will hit some Americans in their wallets.

After years of very low interest rates, a change is coming. The Federal Reserve is raising rates. Borrowing will get costlier for everything from mortgages to car loans to credit cards. For many Americans, that will be a bitter pill. But there are some silver linings. Here’s what you can do in response.

It’s going to get even harder to buy your first house… for now.

When you’re buying something as pricey as a home, interest rates really matter. They have already jumped sharply in anticipation of the Fed’s highly signaled plan to raise rates through the year. Since last summer, mortgage rates have risen more than a full percentage point to above 4% on a 30-year fixed-rate loan.

“It starts to push it from, like, ‘we could maybe make it work’ to the point where you’re just like, ‘it’s not worth it,’ ” says Zach Gubran of Fort Collins, Colorado.

Gubran, 33, and his partner would like to settle down and buy a place of their own. But he says that in this frenzied housing market, that was already tough.

“It’s like this ridiculous situation,” says Gubran, who works as a contractor for a software company. “I have tens of thousands of dollars in savings, and it feels like it’s nothing, it doesn’t matter.”

But it’s not all despair. Rising rates could stop the runaway train of higher home prices

Home prices in the US last year rose nearly 20%. That is a staggering one-year gain. With a historic shortage of homes for sale and superlow interest rates, bidding wars regularly broke out and drove prices ever higher.

In recent years, big price gains like that pulled in more buyers who didn’t want to miss out, which juiced up demand even more in the overheated market.

“Higher mortgage rates may be helpful in cooling the housing market,” says Selma Hepp, an economist with CoreLogic. “That may help bring us back more to some level of normality, and in that case we won’t see so much bidding over the asking price.”

Don’t expect home prices to tumble. But Hepp thinks this year they’ll rise much less, around 3%. A few years like that could give builders time to catch up with demand and build more homes.

Ugh. Monthly payments on home equity lines of credit will go up

Ninety percent of homeowners have fixed-rate mortgages. That’s the good news. They’re protected against rising rates. But millions of Americans have borrowed against their homes. Collectively they owe about $300 billion on home equity lines of credit (HELOCs). Almost all of those have variable rates.

“Your rate is going to go up,” says Kate Wood, who follows home loans for NerdWallet. “A home equity line of credit, these are really, really, really closely tied to the kinds of moves that the Federal Reserve is making.”

But Wood says that since those rates adjust following moves by the Fed, more so than home mortgages do, and since the Fed has only just started to nudge rates higher, you still have at least a little time to look at your options. Some banks will let you take the money you owe on your line of credit and lock that into a fixed interest rate.

“It’s worth reaching out proactively to your lender about that,” she says. “Think about it — this is something that is potentially saving you money. Your lender is maybe not, you know, sending you mailers and calling you up to let you know about this great option with your HELOC.”

Savers will get a better return from bank CDs

For retirees and other people who have considerable savings that they might have to spend, say, a year or two from now, bank CDs for generations have been a go-to option. You don’t have to worry about the stock market crashing, because you get all your money back, plus some interest.

The problem is that in recent years, certificates of deposit have returned almost nothing.

But now with rates rising, we should start to see banks offering at least slightly higher rates on CDs, especially as the year goes on and the Fed keeps nudging rates higher.

Most types of consumer debt, including auto loans, are likely to see rates rise over the coming year. Because prices have been especially high during the coronavirus pandemic. So for car loans, it may be tempting for many people to take out a longer-term seven-year loan to lower their monthly payment.

But financial advisers say three-year or five-year loans are a much better way to go, and they warn against those seven-year car loans. You end up paying a lot more interest. And cars drop in value as time goes by. So a few years down the road if you need a different car, you can end up still owing $5,000 or $10,000 more than your car is worth.

But some people will trade in their old car anyway. “And the balance on the loan is transferred to the new loan, which is crazy,” says Miguel Gomez, a certified financial planner in El Paso, Texas. “Now all of a sudden you’re buying another $30,000 car, but you’re owing $40,000 from the start, which is a cycle that it’s very difficult to get out of.”

Credit card debt is also a cycle that’s tough to quit. And with already high interest rates on credit cards headed even higher, now is a good time to try to pay off those credit cards.

“If you feel trapped, credit counseling can really make a difference,” says Gomez. He points to the National Foundation for Credit Counseling, a proven nonprofit that can help clients get out of debt.

And he says there’s also a good technique you can try at home.

“Take your credit cards — put them in a Ziploc bag,” he says. “Then put that in a Tupperware container full of water. Put it in the freezer and forget about them.”

That way if you really need your credit cards, you still have them. But with your cards on ice, it definitely cuts down on the impulse purchases.