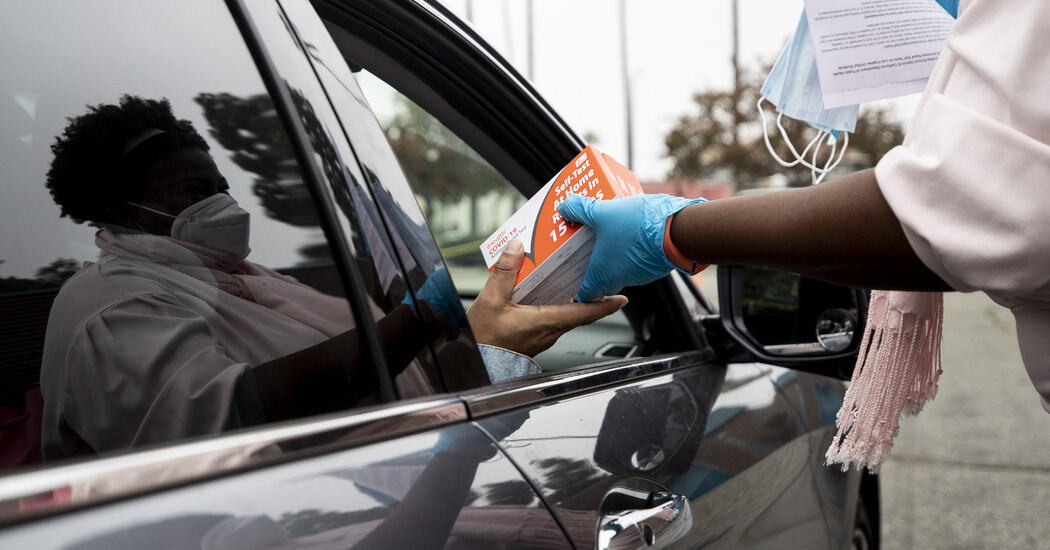 When the highly transmissible Omicron variant of the coronavirus arrived in the United States last fall, it pushed new case numbers to previously unseen peaks.

Even then, the record wave of recorded infections was a significant undercount of reality.

In New York City, for example, officials logged more than 538,000 new cases between January and mid-March, representing roughly 6 percent of the city’s population. But a recent survey of New York adults suggests that there could have been more than 1.3 million additional cases that were either never detected or never reported — and that 27 percent of the city’s adults may have been infected during those months.

The official tally of coronavirus infections in the United States has always been an underestimate. But as Americans increasingly turn to at-home tests, states shutter mass testing sites and institutions cut back on surveillance testing, case counts are becoming an increasingly unreliable measure of the virus’s true toll, scientists say.

“It seems like the blind spots are getting worse with time,” said Denis Nash, an epidemiologist at the CUNY Graduate School of Public Health & Health Policy who led the New York City analysis, which is preliminary and has not yet been published.

That could leave officials increasingly in the dark about the spread of the highly contagious new subvariant of Omicron known as BA.2, he said, adding, “We are going to be more likely to be surprised.” On Wednesday, New York officials announced that two new Omicron subvariants, both descended from BA.2, have been circulating in the state for weeks and are spreading even faster than the original version of BA.2.

The official case count can still pick up major trends, and it has begun to tick up again as BA.2 spreads. But undercounts are likely to be a bigger problem in the weeks ahead, experts said, and mass testing sites and widespread surveillance testing may never return.

“That’s the reality we find ourselves in,” said Kristian Andersen, a virologist at the Scripps Research Institute in San Diego. “We don’t really have eyes on the pandemic like we used to.”

To track BA.2, as well as future variants, officials will need to pull whatever insights they can from an array of existing indicators, including hospitalization rates and wastewater data. But truly keeping tabs on the virus will require more creative thinking and investment, scientists said.

For now, some scientists said, people can gauge their risk by deploying a lower-tech tool: paying attention to whether people they know are catching the virus.

“If you’re hearing your friends and your co-workers get sick, that means your risk is up and that means you probably need to be testing and masking,” said Samuel Scarpino, the vice president of pathogen surveillance at the Rockefeller Foundation’s Pandemic Prevention Institute.

The trouble with testing

Tracking the virus has been a challenge since the earliest days of the pandemic, when testing was severely constrained. Even when testing improved, many people did not have the time or resources to seek it out — or had asymptomatic infections that never made themselves known.

By the time Omicron hit, a new challenge was presenting itself: At-home tests had finally become more widely available, and many Americans relied on them to get through the winter holidays. Many of those results were never reported.

“We haven’t done the groundwork to systematically capture those cases on a national level,” said Katelyn Jetelina, an epidemiologist at the University of Texas Health Science Center at Houston.

Some jurisdictions and test manufacturers have developed digital tools that allow people to report their test results. But one recent study suggests that it may take work to get people to use them. Residents of six communities across the country were invited to use an app or an online platform to order free tests, log their results and then, if they thing, send that data to their state health departments.

Nearly 180,000 households used the digital assistant to order the tests, but just 8 percent of them logged any results on the platform, researchers found, and only three-quarters of those reports were sent on to health officials.

General Covid fatigue, as well as the protection that vaccination provides against severe symptoms, may also prompt fewer people to seek testing, experts said. And citing a lack of funds, the federal government recently announced that it would stop reimbursing health care providers for the cost of testing uninsured patients, prompting some providers to stop offering those tests for free. That could make uninsured Americans especially reluctant to test, Dr. Jetelina said.

“The poorest neighborhoods will have even more depressed case numbers than high-income neighborhoods,” she noted.

But more modest increases in transmission may not be reflected in the case tally, which means that it could take officials longer to detect new surges, experts said. The problem could be exacerbated by the fact that some jurisdictions have begun updating their case data less frequently.

Dr. Nash and his colleagues have been exploring ways to overcome some of these challenges. To estimate how many New Yorkers may have been infected during the winter Omicron surge, they surveyed a diverse sample of 1,030 adults about their testing behaviors and results, as well as potential Covid-19 exposures and symptoms.

People who reported testing positive for the virus on tests administered by health care or testing providers were counted as cases that would have been caught by standard surveillance systems. Those who tested positive only on at-home tests were counted as hidden cases, as were those who had probable unreported infections — a group that included people who had both Covid-19-like symptoms and known exposures to the virus.

The researchers used the responses to calculate how many infections might have escaped detection, weighting the data to match the demographics of the city’s adult population.

The study has limitations. It relies on self-reported data and excludes children, as well as adults living in institutional settings, including nursing homes. But health departments could use the same approach to try to fill in some of their surveillance blind spots, especially during surges, Dr. Nash said.

“You could do these surveys on a daily or weekly basis and quickly correct prevalence estimates in real time,” he said.

Another approach would be to replicate what Britain has done, regularly testing a random selection of hundreds of thousands of residents. “That’s really the Cadillac of surveillance methods,” said Natalie Dean, a biostatistician at Emory University.

The method is expensive, however, and Britain has recently started scaling back its efforts. “It’s something that should be part of our arsenal in the future,” Dr. Dean said. “It’s sort of unclear what people have the appetite for.”

The spread of Omicron, which easily infects even vaccinated people and generally causes milder disease than the earlier Delta variant, has prompted some officials to put more emphasis on hospitalization rates.

“If our goal is to track serious illness from the virus, I think that’s a good way to do it,” said Jason Salemi, an epidemiologist at the University of South Florida.

But hospitalization rates are lagging indicators and may not capture the true toll of the virus, which can cause serious disruptions and long Covid without sending people to the hospital, Dr. Salemi said.

Indeed, different metrics can create very different portraits of risk. In February, the Centers for Disease Control and Prevention began using local hospitalization rates and measures of hospital capacity, in addition to case counts, to calculate its new “Covid-19 community levels,” which are designed to help people decide whether to wear masks or take other precautions. More than 95 percent of US counties currently have low community Covid-19 levels, according to this measure.

But the CDC’s community transmission map, which is based solely on local case and test positivity rates, suggests that just 29 percent of US counties currently have low levels of viral transmission.

Hospitalization data may be reported differently from one place to another. Because Omicron is so transmissible, some localities are trying to distinguish between patients who were hospitalized specifically for Covid-19 and those who picked up the virus incidentally.

“We felt like, because of the intrinsic factors of the virus itself that we’re seeing circulating in our region now, that we needed to update our metrics,” said Dr. Jonathan Ballard, the chief medical officer at the New Hampshire Department of Health and Human Services.

Another solution is to use approaches, such as wastewater surveillance, that don’t rely on testing or health care access at all. People with coronavirus infections shed the virus in their stool; monitoring the levels of the virus in wastewater provides an indicator of how widespread it is in a community.

“And then you combine that with sequencing, so you get a sense of what variants are circulating,” said Dr. Andersen, who is working with colleagues to track the virus in San Diego’s wastewater.

The CDC recently added wastewater data from hundreds of sampling sites to its Covid-19 dashboard, but coverage is highly uneven, with some states reporting no current data at all. If wastewater surveillance is going to fill in the testing gaps, it needs to be expanded, and the data needs to be released in near real time, scientists said.

“Wastewater is a no-brainer to me,” Dr. Andersen said. “It gives us a really good, important passive surveillance system that can be scaled. But only if we realize that that’s what we have to do.”

Dr. Scarpino, of the Pandemic Prevention Institute, said that there were other data sources that officials could leverage, including information on school closings, flight cancellations and geographic mobility.

“One of the things we’re not doing a good enough job of doing is pulling those together in a thoughtful, coordinated way,” Dr. Scarpino said.