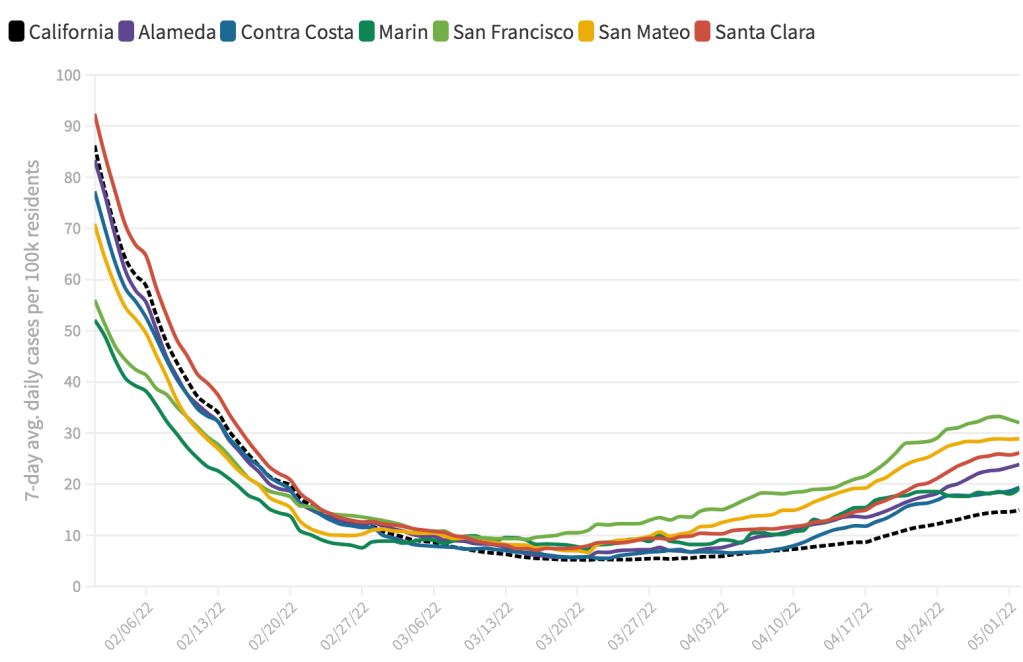 If you’re worried about COVID, it might be time to dig out that mask again.

California’s case rates have nearly tripled since late March, and in a newly emerging dynamic, the Bay Area’s rates are higher than the state’s.

“It’s the first time we’ve seen that,” said John Swartzberg, professor emeritus of infectious disease and vaccinology with the University of California-Berkeley. “It’s always been the other way around.”

Case rates here are some of the worst in California right now, as new, highly contagious variants continue to spread. San Francisco’s case rate is more than double the state’s, with a 7-day average of more than 30 new daily cases per 100,000 residents, according to data updated Friday.

Cases are still just one tenth of what they were during the dramatic peak in January 2022, from the deadly omicron surge. But with most vaccine restrictions and mask mandates a thing of the past, the Bay Area is seeing more than three times as many positive cases as it was about six weeks ago, after the winter surge had abated. Hospitalizations have crept back up 12%, from a low of 1,224 hospitalized COVID patients on April 25 to over 1,369 on Thursday.

The situation in the Bay Area and California follows a rise in cases across much of the country. Cases nationwide are up 170% to levels not seen since February, according to the Centers for Disease Control and Prevention. Hospitalizations are up 16%, and COVID deaths have started to inch up after steady declines since February.

Transmission levels are high all along the West Coast, throughout the Northeast and Great Lakes and southern portions of Texas and Florida, CDC data show. And community levels, meant to indicate the virus’ impact on regional health care, are at the yellow medium level in the Bay Area and 10% of the country as a whole. That’s a level where the CDC says those at high risk should consider wearing a mask. Much of the Northeast is at the high level where the CDC recommends wearing masks in public indoors.

San Francisco was the first county in the region to experience an increase in cases, as early as mid-March, followed by Santa Clara, San Mateo and then the others. All of those counties have had case rates higher than the state’s for several weeks, despite historically having lower case rates than the rest of the state for almost the entire pandemic.

The problem these days: Case rates undercount how much virus is actually spreading, according to experts, especially now.

“There’s a real big disconnect between cases reported and the actual number of cases,” said Swartzberg, who pointed to research showing that a smaller proportion of cases are being detected and counted now than in other recent waves.

That’s because more people are using at-home rapid tests that don’t get tallied like PCR tests performed at labs.

Dr. George Rutherford, an infectious disease specialist at UC-San Francisco, pinned the rise on a combination of factors.

The highly transmissible omicron variant that drove a massive wave of infections over the winter, BA.1, has spawned even more contagious cousins, known as BA.2, now 62% of cases nationally, and BA.2.12.1, now 37% , according to the CDC. Plus, the protection many of us gained from earlier infection and vaccination is wearing off.

“For those who were naturally infected in December or January, that immunity is starting to wane about now,” Rutherford said. “Prior infection with the regular BA.1 strain doesn’t provide nearly the protection from BA.2.12.1.”

“The vaccines were great for preventing severe disease and preventing death, but their ability to prevent infection wanes over time,” Rutherford said, adding those who are due should get a booster.

You also may want to dig out your N95 when you gather indoors. Most mask orders, of course, lifted in March, and federal officials also dropped mask requirements last month for public transportation, including air travel, commuter trains, buses and ride hailing services like Uber.

“People have stopped wearing masks and are risk-taking,” Rutherford said.

Severe illness and hospitalizations haven’t risen as much as infections, but Rutherford said it’s no reason to be complacent about the virus. Even a mild infection can upend your life for a week or so of quarantining and isolation due to rules to prevent the virus’ spread at work and school. But there’s also the risk of developing so-called Long COVID, a lingering of symptoms that doctors still don’t fully understand.

“I find that more compelling than anything else,” Rutherford said, citing figures that 30% of those infected “still have it a year later.”

“It’s miserable,” Rutherford said. “If I were to go into a movie theater, if I were going into a grocery store, I’d wear a mask. In most closed indoor settings, the best part of valor is to wear a mask, at least for a while here.”