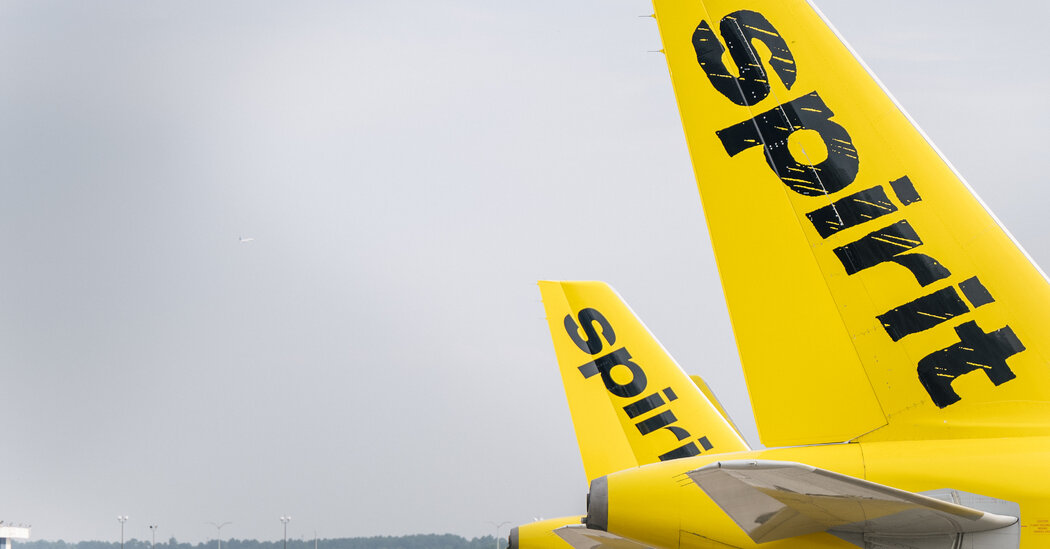 When the dust settled on a big round of airline consolidation nearly a decade ago, four large companies came to dominate the industry. A new merger scramble could challenge that cozy arrangement.

A brewing fight over the future of the budget carrier Spirit Airlines may give rise to a credible, albeit still smaller, competitor to the industry’s giants. In February, Frontier Airlines and Spirit announced plans to merge, promising to create a national budget airline that would help keep fares low. JetBlue Airways this week made its own bid, of $3.6 billion, for Spirit, which said late Thursday night that it would consider the proposal.

Whether Spirit ends up merging with Frontier or JetBlue, the combined company could pose a more formidable threat to the nation’s four largest airlines — American Airlines, Delta Air Lines, United Airlines and Southwest Airlines — which have a combined 66 percent share of the domestic market . The four operate in a league of their own, especially at their hub airports in cities like Atlanta, Dallas, Houston and Newark, where they each control a large share of gates and flights.

In an illustration of the industry’s lopsided nature, Alaska Airlines, the fifth-largest carrier last year, controlled just 5 percent of the domestic air travel market, while United, the fourth biggest, had nearly 13 percent. A combined Frontier and Spirit would control over 8 percent of the market, and JetBlue and Spirit together would command more than 10 percent.

“You’re facing American, United, Delta and Southwest with such enormous fleets and market penetration,” said Samuel Engel, a senior vice president and airline industry analyst at ICF, a consulting firm. “It is reasonable that a beefier No. 5 will make for a stronger competitor.”

Of course, neither deal is a certainty, and in either combination, executives could struggle to mesh the businesses. Integrating airlines, including their computer systems and the seniority rankings of pilots and flight attendants, has never been easy and has led to widespread flight cancellations and long legal disputes.

Either proposed merger would also require the approval of antitrust regulators who under President Biden have been emboldened to challenge deals that might have sailed through in previous administrations.

“Both deals present a new challenge to antitrust agencies,” said Paul Denis, who represented US Airways in its merger with American Airlines, which closed in 2013. Earlier in his career, he also reviewed mergers and acquisitions at the Justice Department.

Mr. Denis said regulators examining airline deals had historically focused on the impact of combining large, legacy airlines — those in business for decades. This review, however, would explore whether there is a “unique rivalry” among the lower-cost carriers “that is serving of protection” by the Justice Department.

Regulators are concerned about more than market share. They want to know how a proposed merger affects travelers, including whether the combined company will be able to significantly raise fares on routes where the two companies previously competed head-to-head. And the Biden administration is uniquely focused on the impact of corporate deals on economic inequality by, for example, raising fares and suppressing wages. It is not always easy to predict the likely impact of any given deal, legal experts said.

In addition, Frontier and Spirit have been criticized for poor customer service, and Phil Weiser, the attorney general of Colorado, where Frontier is based, warned federal regulators last month that the merger “creates a real and pressing risk” that service could worsen if the two companies merged.

JetBlue already competes with the four large airlines in cities like New York and Boston and could challenge them further if it is able to acquire Spirit’s planes, airport gates and staff. Consumers could benefit from a better flying experience thanks to the perks that JetBlue offers. But Spirit’s ultracheap fares may not survive because JetBlue tends to cater to more affluent travelers and has been expanding premium services like business-class seats.

Another factor that could complicate JetBlue’s bid for Spirit is that it is already enmeshed in an antitrust lawsuit brought by the Justice Department. The department is seeking to nullify an alliance between JetBlue and American in the Northeast, a deal that one official described last year as a “de facto merger.” The agency said in its lawsuit that American, the largest airline in the country, would use the partnership to “co-opt a uniquely disruptive competitor.” JetBlue and American deny that their deal is anticompetitive and are fighting the case in court.

JetBlue executives said this week that they intended to continue the company’s partnership with American in the Northeast. They also said that buying Spirit would allow JetBlue to compete more aggressively with the four big airlines.

Some critics of corporate consolidation disagree and say that airline mergers could be bad for consumers and workers.

Under either deal, the new larger airline would have more market power in certain cities, particularly in Florida, a popular destination where all three airlines compete.

Diana Moss, the president of the American Antitrust Institute, a left-leaning organization that has long called for tougher enforcement of competition laws, has asked the Justice Department to block the Spirit-Frontier deal. Ms. Moss and others published a study in 2013 that concluded that airlines don’t deliver on the benefits they claim their mergers will provide.

Senator Elizabeth Warren, the Massachusetts Democrat, is another skeptic. “Mergers in the airline industry have led to higher prices for consumers and lower wages for workers, and the Justice Department needs to closely scrutinize these proposed deals and challenge them if necessary,” she said in a statement to The New York Times this week, echoing a letter she and other lawmakers sent to regulators last month about the Frontier-Spirit deal.

Since the industry was deregulated in the late 1970s, airlines have undergone successive waves of consolidation as they sought first regional, national and then international strength. Financial troubles, including a string of bankruptcies, in the 2000s led to the latest wave of large mergers, motivated in large part by survival, said William Swelbar, an aviation consultant and research engineer at the Massachusetts Institute of Technology’s International Center for Air Transportation.

“The last round of consolidation really was about balance sheets,” he said. “I don’t think these companies individually would have made it.”

The current deals appear to be about quickly bulking up. That’s because larger airlines have advantages. They can more easily recruit pilots, who are in short supply. Bigger airlines also get lower prices and better service from airplane manufacturers. And the easiest way to grow at many airports is to buy another airline that has gates and takeoff and landing slots.

But some analysts are not sure that airlines can easily reap the rewards of bigness through mergers.

JetBlue’s stock has fallen more than 10 percent since The Times reported its offer for Spirit in part because investors are unsure of JetBlue’s ability to fully take advantage of the acquisition.

Analysts speculated that JetBlue made its offer in part because it feared losing business to a combined Frontier-Spirit, which the airline cited as a potential risk to its competitiveness in its annual report. This is not the first time JetBlue has tried to grow by acquiring another airline. It tried to buy Virgin America, but lost that deal to Alaska Airlines.

Even in ideal circumstances, airline mergers can be difficult to pull off. And while Spirit and JetBlue have some overlap, for example in similar fleets of planes, they operate differently. Spirit does everything it can to keep costs and fares low. It charges extra for seat selection and carry-on baggage and packs seats close together. JetBlue similarly tries to keep costs low but tries to distinguish itself by offering more legroom and free wireless internet in flight.

Spirit has not committed to either deal. It said this week that it was reviewing JetBlue’s unsolicited bid. By numbers alone, JetBlue’s all-cash deal is superior, offering a roughly 40 percent premium to Frontier’s original cash and share offer, based on share prices the day before JetBlue disclosed its bid.

Frontier could still raise its bid, or change its composition. (Spirit’s board originally preferred a deal paid for in stock, according to regulatory filings, but shares of Frontier have fallen since the deal was announced.) Frontier could also offer to pay any costs associated with the risk that regulators would challenge the merger in court . JetBlue has guaranteed Spirit a reverse breakup fee if its deal is called off over antitrust concerns.

Some legal experts said that either deal could win the backing of regulators with some compromises like an agreement to divest gates at some airports.

“I still think that at the end of the day, either deal that could possibly be challenged would likely be approved,” said Kerry Tan, an economics professor at Loyola University Maryland. “Whatever challenges the DOJ provides, concessions can be made.”