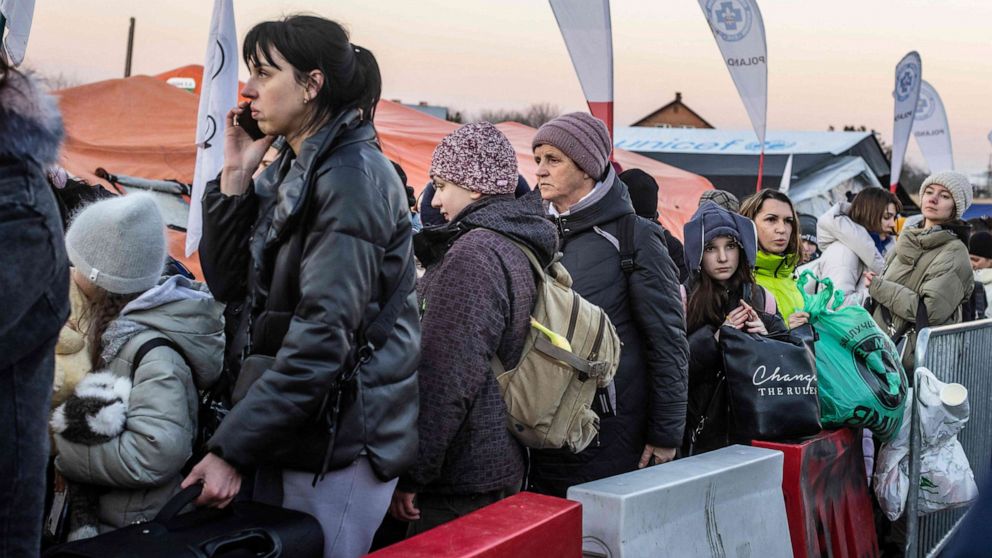 The Biden administration is considering ways to fast-track bringing Ukrainian refugees to the US amid the historic surge across Europe of Ukrainians fleeing Russia’s war, according to US officials.

But the administration faces some legal hurdles to do so, especially to giving Ukrainians refugee status, and has instead repeatedly emphasized that “the vast, vast majority of refugees want to stay in neighboring countries,” as White House press secretary Jen Psaki said Thursday, adding, “That is where we have been focus our energies at this point.”

That focus comes in the form of US assistance: $293 million so far, with another $4 billion specifically for humanitarian aid in the new funding bill President Joe Biden signed earlier this week.

But as the needs grow — as cities like Warsaw and countries like Moldova are overwhelmed — there’s growing pressure on the White House, including from some US lawmakers, to do more.

The refugee resettlement process, however, is complex and time-consuming, with very few avenues to expediting cases from the point they are referred to the US by the United Nations refugee agency, through the vetting process, to their resettlement in a local community.

But Secretary of State Antony Blinken confirmed the administration is “looking at things that we can do ourselves and do directly.”

“As this and if this goes on, as the numbers increase, as the burden increases for European partners, we will certainly do everything we can to help,” he added Thursday, saying it was “something we’re very focused on right now ” and previewing “more to say on this in the coming.”

So far, the White House has ordered some steps. Last week, the Department of Homeland Security announced it had granted Temporary Protected Status for Ukrainians already in the US by March 1, allowing them to stay legally and work for at least the next 18 months.

In addition, US embassies and consulates in the region have been expediting visa processing for immediate family members of US citizens, but they are overwhelmed.

“We are throwing many, many resources at the assistance for US citizens in this region as well as visa processing, but the demand, as you can imagine, is very high,” a senior US administration official said. “We are not able to process the volume of the people who are thinking about that as an option.”

That pool of people is also already limited. Immigrant visas only apply to immediate family members as defined under US law — spouses, unmarried children under 21, and parents.

If a US citizen’s family member doesn’t fall into those categories, there’s a process to petition US Citizenship and Immigration Services to approve their case, but that is not being expedited, according to the senior administration official, meaning their application could take months, even years.

Refugee advocates, however, say there are potentially thousands of Ukrainians for whom the USCIS has confirmed their familial relationship, but haven’t yet fully approved their petition — arguing their cases can and should now be expedited.

It’s clear if the administration is weighing that. Blinken told reporters Thursday they were “looking at steps we may be able to take on family reunification.”

Wait times for nonimmigrant visas are often shorter, and applicants can request your application be expedited. But the senior administration official said there’s a risk of being denied because these are “not the appropriate tool to begin an immigrant, refugee, or resettlement process.”

“If your plan is to go to the United States and you have absolutely no idea what you’ll do after that — which I have to say on a human level is very understandable — as US consular officers who are charged with executing US immigration law, they [Ukrainian applicants] would be well advised to have much more of a plan afterward,” they said.

The Department of Homeland Security also has the ability to provide another kind of temporary legal status known as humanitarian parole that allows a foreigner to enter the US usually for up to a year. Reuters has reported that Customs and Border Patrol agents have been granting humanitarian parole to Ukrainians crossing the US-Mexico border.

DHS declined to comment to ABC News about those reports.

“We address an individual’s claim for humanitarian relief as they are presented to us,” Homeland Security Secretary Alejandro Mayorkas said Thursday. “We are looking at other programs that we can implement to expand the avenues of humanitarian relief.”

But DHS continues to use a public health authority known as Title 42 to send the majority of adults attempting to cross the border back to their country of origin. The policy was enacted at the start of the COVID-19 pandemic by the Trump administration, and despite intense pressure from immigrants’ rights group and progressive Democrats, the Biden administration has yet to lift it.

Mayorkas said DHS has issued guidance to all CBP officers on the border reminding them of the exceptions to the Title 42 authority and how it relates to Ukrainian nationals “and everyone else” attempting to make credible fear claims at the southern border. But Psaki said revoking Title 42 “wouldn’t be done in response to a war in a European country. It’s done by — a decision would be made by the CDC and then it would be implemented.”

The push to “fast track” the refugee process, however, is unlikely to yield results, with the program defined by law and requiring a referral and thorough vetting. The senior administration official said it “is not an emergency response program, so our goal would be to provide humanitarian assistance to keep people safe where they are for now” instead.

For many refugees seeking to move to the US, it is a years-long process. There are already 7,000 Ukrainian refugees who have been in the pipeline for resettlement, according to Church World Service.

While Blinken said “of course we will take referrals” for new refugees, he also emphasized the administration is “looking at steps that we can take in the near term.”

Refugee resettlement agencies say the administration is considering using the Lautenberg program as one way to potentially expedite refugee status. The Cold War-era program allows religious minorities, including Ukrainian Greek Catholics and Ukrainian Autocephalous Orthodox Christians, to bring family members to the US with refugee status.

One agency told ABC News there are thousands of Ukrainian applications that the US could swiftly admit, but it’s not clear the administration agrees.