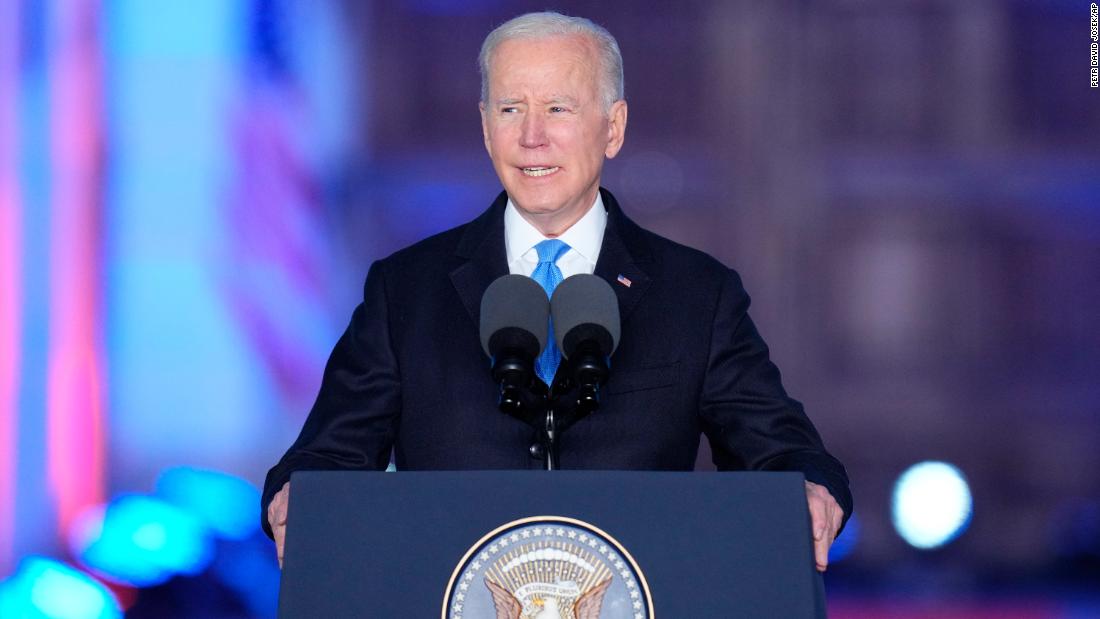 “For God’s sake, this man cannot remain in power,” Biden announced at the very conclusion of a capstone address delivered outside the Royal Castle in Warsaw.

He was the furthest Biden has gone in calling for regime change in Russia and reflects a significant change in the American approach to Moscow. US officials had said previously said removing Putin from power was not their goal.

Kremlin spokesman Dmitry Peskov responded to Biden, saying, “This is not to be decided by Mr. Biden. It should only be a choice of the people of the Russian Federation.”

Biden opened his speech saying that Ukraine is now a front line battle in the fight between autocracy and democracy, casting Russia’s invasion of its neighbor as part of the decadeslong fight that has played out between the West and the Kremlin.

“My message to the people of Ukraine is … we stand with you. Period,” said Biden, in a speech delivered in front of the Royal Castle in Warsaw, Poland.

Just before Biden was set to speak in Poland, an airstrike struck a fuel depot just outside Lviv, Ukraine — about 200 miles away from where the President would speak. The strike caused billowing smoke and flames to rise above the western Ukrainian city, which had largely been seen as a safe haven during the war given its distance from the Russia-Ukraine border.

It was a surprising attack, coming just a day after the Russian military said the first phase of the conflict had ended and they were shifting their attention to the disputed eastern parts of Ukraine. After days of Western leaders displaying their united front against Russia, the strike could be seen as a response from Putin and his military to Biden and the West.

Biden, standing along NATO’s eastern edge, in Poland, issued a stern warning during his speech, telling Putin: “Don’t even think about moving on one single inch of NATO territory.” He said the US was committed to the collective protection obligations laid out in NATO’s charter “with the full force of our collective power.”

But Biden made clear the current conflict in Ukraine — not a NATO member — doesn’t require America to become directly involved.

In a message to the Poles and other NATO allies, Biden used a Cold War-era cry from the late Polish-born Pope John Paul II to rally a nation facing new threats.

“Be not afraid,” Biden said.

“Nothing about that battle for freedom was simple or easy. It was a long, painful slog fought over not days and months but years and decades,” Biden told the crowd. “We emerged anew in a great battle for freedom, a battle between democracy and autocracy, between liberty and repression.”

He said the same lessons must be applied to the current threat from Russia.

“This battle will not be won in days or months either. We need to steel ourselves for a long fight ahead,” Biden said.

Earlier in the day, Biden cited a dark history of US hesitance with involving itself in Europe’s wars as an example of how the continent’s security is in the American national interest, a striking comment illustrating the about-face in US foreign policy from the last administration .

“America’s ability to meet its role in other parts of the world rests upon a united Europe and a secure Europe,” Biden said Saturday as he met with Polish President Andrzej Duda in Warsaw. “We have learned from sad experiences in two world wars, when we’ve stayed out of and not been involved in stability in Europe, it always comes back to haunt the United States.”

Biden’s comments came during the final day of a last-minute trip to Europe aimed at synchronizing how Western allies address Russia’s aggression against Ukraine. Biden and Duda spent a lengthy stretch in a one-on-one meeting before beginning an expanded session with aides. Biden said he raised the world war comparisons during the private meeting.

In brief remarks, Biden repeatedly cited America’s commitment to NATO’s Article V pledge of common defense, and noted he was a main proponent of Polish membership in NATO when he was a senator 25 years ago.5

The President’s comments are a sharp contrast from the “America First” foreign policy of former President Donald Trump, who called NATO “obsolete” before he came into office and often questioned the value of American alliances with European nations. Trump’s time in office was marked by his spats with foreign leaders and the often-contentious nature of his dealings with traditional American allies in Europe and across the globe.

Given this recent history, NATO’s strength and unity had been questioned in recent years. Biden told Duda that he was sure Putin “was counting on being able to divide NATO and separate the eastern flank from the west, and separate nations based on past histories. But he wasn’t able to do it.”

And noting that Poland had taken in millions of refugees fleeing violence in Ukraine, Biden made a point of referring migrants seeking entry into the United States at its southern border. But he said the US must also take in people fleeing the war in Europe.

“We have, in our southern border, thousands of people a day — literally, not figuratively — trying to get into the United States,” he said. “But we believe that we, the United States, should do our part relative to Ukraine as well, by opening our borders to another 100,000 people.”

Earlier Saturday, Biden met Ukrainian government officials who had traveled to Warsaw for engagements with their American counterparts. Biden’s visit to Europe has been entirely focused on the war, but the talks with Foreign Minister Dmytro Kuleba and Defense Minister Oleksii Reznikov were the first time Biden was able to meet face-to-face with officials from Ukraine during his tour.

As it got underway, Kuleba described an arduous journey from Kyiv to Warsaw that included a train and three hours in a car.

“It’s like flying from Kyiv to Washington with a connecting flight in Istanbul,” Kuleba said. “The good thing is that since the beginning of the war I’ve learned how to sleep under any conditions. So I slept on the train, I slept in the car.”

Biden, on hearing how the ministers had traveled, relayed that he, too, had made many journeys by train.

“You’re looking at a fellow who’s traveled over a million, 200,000 miles on a train. Literally,” Biden said. Biden commuted from his home in Delaware to Washington as a senator and vice president on Amtrak trains.

The United States is considering sanctioning Russian companies that make supplies for the Russian military, sources familiar with the option told CNN following the meeting, though an official decision hasn’t been made. Kuleba said he believed Biden administration officials were “keen to move on with further sanctions.”

Ukraine has been pressing the US and NATO to increase the military assistance they are providing to Ukraine, including calls from President Volodymyr Zelensky to establish a no-fly zone.

After talks in Brussels this week, during which Zelensky appeared virtually, he did not appear NATO members had warmed to the idea. Biden has said becoming more directly involved in the conflict could usher in World War III.

That left Ukraine’s leaders dismayed. “We are very disappointed, in all honesty. We expect more bravery. Expected some bold decisions. The alliance has taken decisions as if there’s no war,” said Andriy Yermak, head of the Office of the President of Ukraine, in a live interview with the Atlantic Council on Friday.

A focus on refugees on trip’s final day

While Biden is meeting with refugees in Warsaw, he said on Friday that he would have preferred to see the crisis from an even closer perspective.

“They will not let me — understandably, I guess — cross the border and take a look at what’s going on in Ukraine,” he said. The White House has said it did not explore a visit to Ukraine.

The visit to Ukraine’s western neighbor comes as Poland has, on several fronts, urged the US to do more in the war.

For example, Duda has asked the US to speed up and simplify the procedures allowing Ukrainians with family in the US to come to the country.

More than 3.5 million refugees have now fled Ukraine, according to data from the United Nations refugee agency released on Tuesday. A vast majority of those refugees have fled to Ukraine’s western neighbors across Europe.

Poland, which borders Ukraine to the west, has registered more than 2 million Ukrainian refugees crossing into the country, though not all refugees who have entered Poland remain there.

Biden met with chef José Andrés and other volunteers in Warsaw Saturday at a food distribution site for Andrés’ World Center Kitchen, the nonprofit devoted to providing meals in the wake of disasters.

Biden met with some of the volunteers, some from Europe and some from the United States.

“God love ya,” the President could be heard saying to them and asking if he could help them.

Following his meeting with refugees at Stadion Narodowy, Biden was asked by reporters what seeing the Ukrainian refugees made him think of as he deals with Putin every day. Biden responded, “He’s a butcher.”

There are other issues connected to the war in Ukraine that have been top of mind in Poland.

US has continued to reject Poland’s proposal to facilitate the transfer of its MiG-29 fighter jets to Ukraine. And the Polish President has called for a more permanent NATO defense posture in the country along with an international peacekeeping force in Ukraine.

US officials have not warmed to the peacekeeping proposition, suggesting it could violate Biden’s red line of keeping US troops out of the conflict.

The Polish President added that Biden’s visit “demonstrates a huge support and also a big significance attached by the United States to the stability and world peace, to reinstating the peace where difficult situations are happening in places where somebody resorts to acts of aggression against other democratic and free nations — as it is happening today against Ukraine where the Russian aggression, unfortunately, happening for a month now is effect.”

This story has been updated with additional developments on Saturday.