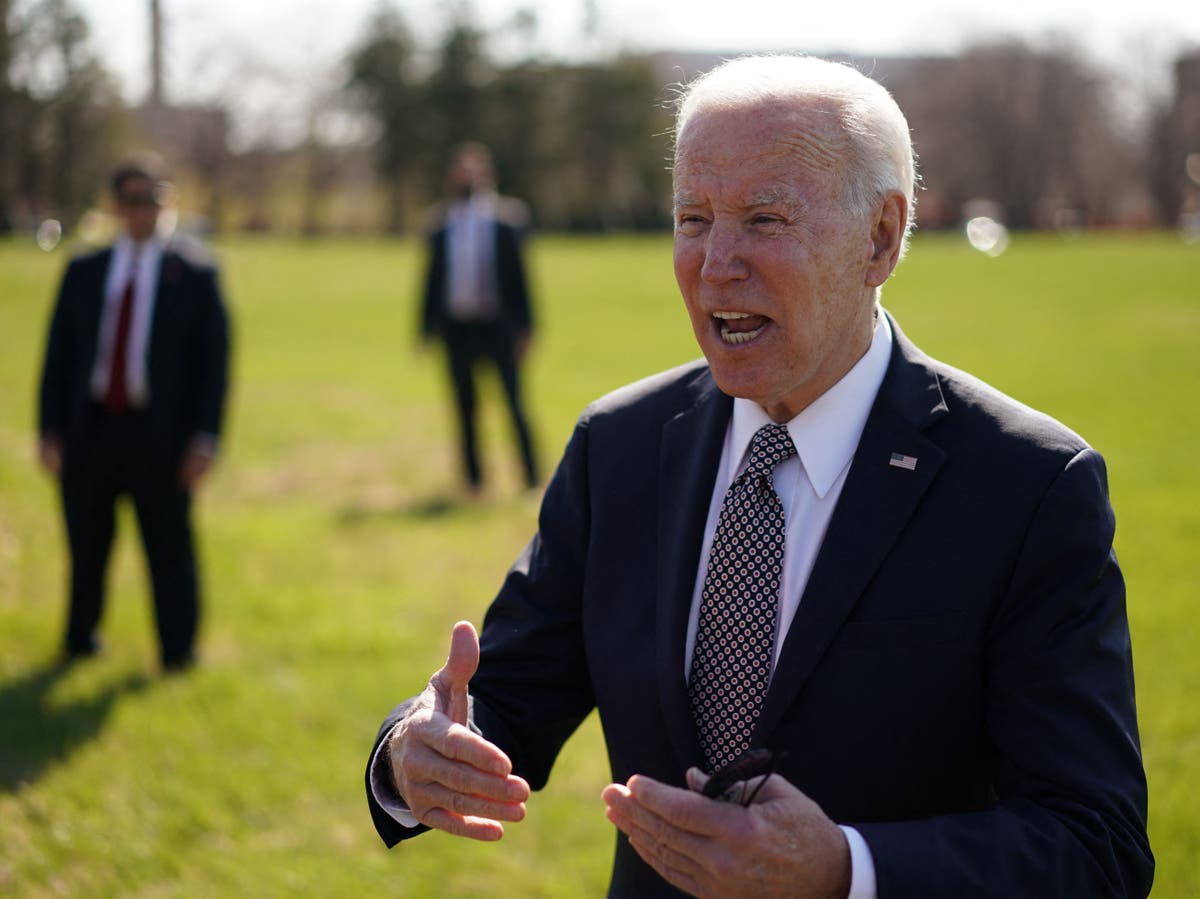 As horrifying details of atrocities committed by Russian forces in Ukraine continue to emerge, Joe Biden has reiterated his view that Vladimir Putin is a war criminal – and has suggested he should face legal consequences for what his military is doing.

Speaking to reporters in Washington as he disembarked Marine One, Mr Biden said: “You remember I got criticized for calling Putin a war criminal. Well, the truth of the matter – you saw what happened in Bucha – he is a war criminal… We have to get all the details so that this can be, so we can actually have a war crimes trial. This guy is brutal, and what’s happening in Bucha is outrageous.”

On Capitol Hill, the Senate Judiciary Committee ended its vote for Judge Ketanji Brown Jackson’s nomination to the Supreme Court in a deadlock after Republicans responded to criticism they were too harsh in their questioning. Nevertheless, Ms Jackson looks set to become the first Black woman to sit on the court.

The tied vote by the committee does not stop the nomination from proceeding to the Senate floor, where Ms Jackson appears to already have the support of 51 senators.

Ahead of Barack Obama’s visit to the White House for an event celebrating the impact of the Affordable Care Act, Jen Psaki described the two presidents’ relationship as a genuine friendship, not just the kind of superficial amity that’s a feature of life in US politics.

More on today’s public meeting below:

John Kirby, the press secretary for the Pentagon, appeared on MSNBC last night to discuss the events that have come to light in the Ukrainian town of Bucha, where Russian soldiers have brutalised, raped and murdered scores of civilians.

Republican Senator Lindsey Graham spent Ketanji Brown Jackson’s nomination hearings in a foul mood, and he showed the same irascibility at the committee vote on her nomination yesterday.

Among his various recriminations, most of which had little if anything to do with the judge herself, was an implicit threat to block almost by default any nominee put forward by Democratic president if and when Republicans control the Senate.

This is what Lisa Murkowski worried about in her endorsement of the judge before her full Senate vote. “We are at that point where it’s almost automatic: If it is a president who is not of my party puts forth a nominee, I am somehow obligated to just barely even give consideration, not just before the name is named,” she said.

“This is an awful process, it’s just awful.”

Watch a clip of Mr Graham’s remarks below.

‘White House national security adviser Jake Sullivan on Monday said the atrocities committed by Russian forces in Bucha and other cities of Ukraine are part of a deliberate plan to inflict terror on civilians.

Speaking at Monday’s daily White House press briefing, Mr Sullivan said the brutality of Russian forces was what “Russia was intending” for Ukraine “as a matter of policy”. of a particular individual — we believe that this was part of the plan,” he said.

Zelenskyy to address United Nations amid outrage over civilian deaths

The withdrawal of Russian troops from towns around Ukraine’s capital revealed corpses on streets, that have led to calls for tougher sanctions against the Kremlin, especially a cutoff of fuel imports from Russia.

Germany and France reacted by expelling dozens of Russian diplomats, suggesting they were spies.

“Why didn’t you vote against every one of those Republican judges that was not following the guidelines, as most don’t?” he asked in response to Mr Hawley, who had questioned Ms Jackson before him.

After the hearing, Mr Booker told The Independent why he spoke up for her record. “She didn’t need me to defend her record,” he said.

“She could have had a committee of 22 Josh Hawleys and she would have still persevered. She’s extraordinary. I felt a need to speak to her record which, was a lot of folks felt was being disrespected or overlooked at a time that it should be celebrated and really given the honor and due that it deserves.”

Ms Psaki responded to a series of questions from Fox News correspondent Peter Doocy, who asked whether Joe Biden’s administration believes it is “fair” that “biological males are competing against women” in university sports, and “at what age does the White House think that students should be taught about sexual orientation or gender identity”.

“Parents across the country are looking to national, state and district leaders to support our nation’s students, to ensure that kids are treated equally in schools, and this is not a reflection of that,” she said.

Naomi Biden, 28, got engaged to Peter Neal, 24, in September 2021 near his family home in Jackson Hole, Wyoming.

She is the eldest of the Biden grandchildren and is the daughter of Hunter Biden and Kathleen Buhle.

White House national security adviser Jake Sullivan on Monday said the atrocities committed by Russian forces in Bucha, Ukraine and other parts of the country part of a deliberate plan to inflict terror on civilians.

“The truth of the matter – we saw it happen in Bucha – this warrants him – he is a war criminal,” said Mr Biden, who added that the Russian dictator “should be held accountable”.

Senators Lisa Murkowski of Alaska and Mitt Romney of Utah announced that they would vote to confirm Judge Ketanji Brown Jackson to the Supreme Court.

“After multiple in-depth conversations with Judge Jackson and deliberative review of her record and recent hearings, I will support her historic nomination to be an associate justice on the US Supreme Court,” she said.