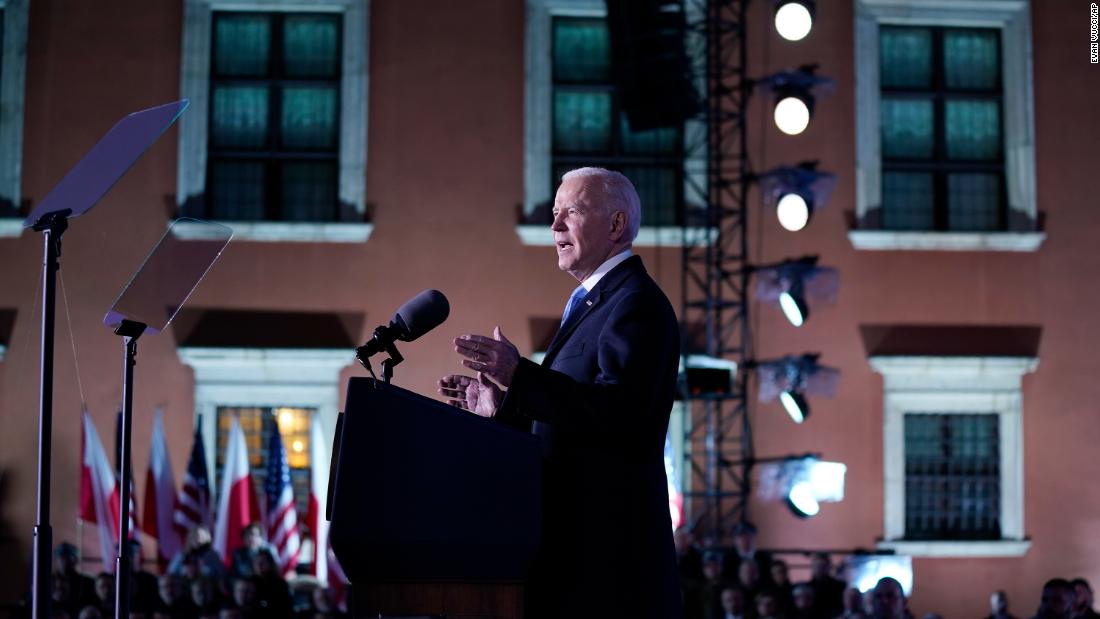 The target hardly seemed coincidental. Biden was 250 miles away, visiting Ukrainian refugees in bitter cold at Poland’s national stadium. He heard pleas from young mothers to pray for the men — husbands, fathers, brothers — they had left behind.

“We Ukrainian mothers are ready to strangle (Putin) with our bare hands,” said a woman whose son remained to fight. Gathering up a small girl wearing a pink coat and pigtails, Biden told her he wanted to take her home.

The very final words Biden would utter on his last-minute swing through Europe ended up being the most consequential, reverberating widely as Air Force One departed for Washington. They surprised his aides, many of whom spent hours honing the text of a speech viewed by the White House as a significant moment for Biden’s presidency. The line Biden uttered wasn’t in what they wrote.

Gathered backstage at the castle, White House officials hastily issued a clarification — one of several on this trip alone — to say Biden wasn’t calling for regime change. But not before the Kremlin issued its own confronted response, saying Russia’s ruler is “not to be decided by Mr. Biden.”

The series of events that unfolded here Saturday afternoon placed into sharp relief the highly unsettled atmosphere that pervades Europe as Russia’s invasion of Ukraine enters its second month. A display of aggression from Putin in the borderlands of Ukraine was followed by an offhand yet forcefully delivered suggestion from Biden that Russians find another leader.

Biden’s view of Putin had been growing increasingly dark over the past month, according to officials, and his language has sharpened in describing a “pure thug,” “murderous dictator,” “war criminal” and, after visiting refugees at the stadium, a “butcher.”

His aides have said Biden has been hoping to avoid the Cold War, Washington versus Moscow dynamic he believes Putin desires. Instead, he left Europe more directly at odds with the Russian leader than ever.

Whether that was his intention seemed unclear. The clarification the White House issued was at least the third time on Biden’s trip a White House official felt obliged to clean up remarks the President made that appeared, on their own, startling.

As he was hailing the heroism of the Ukrainians, Biden told US troops “you’re going to see when you’re there” — even though he’s vowed American forces won’t be entering the conflict directly. Afterward, a spokesman said nothing had changed: “The President has been clear we are not sending US troops to Ukraine.”

And after Biden said he would respond “in kind” to the use of chemical weapons by Russia in Ukraine, national security adviser Jake Sullivan assured reporters the United States has “no intention of using chemical weapons period, under any circumstance.”

Biden has a well-established pattern of speaking out of hand, though perhaps never with stakes so high. White House officials said before Biden’s speech the President had been working intently behind the scenes to reinforce cooperation among his counterparts.

“He sleeps way less on these kinds of trips than maybe other trips because he’s just going, going, going — like, wants to talk to the next leader; you know, take the next briefing,” Sullivan said Friday midway through Biden’s flight from Brussels to Rzeszów in southeastern Poland, where he was meeting with American soldiers.

Coming exactly a month since Russia invaded Ukraine, Biden’s snap visit to Europe was meant as a show of American resolve as the continent faces its worst conflict since World War II. Aides said after months of telephone calls and video conferences from his basement Situation Room in Washington, Biden wanted to come here to meet leaders face-to-face at a critical juncture in the war.

The timing of the summits was abrupt, leaving some European officials doubtful anything could possibly come from talks without the usual time to prepare. Some Western officials worried Biden’s insistence on an in-person gathering was an attempt to force decisions on some of the remaining sticking points.

Others worried that instead of reinforcing unity among the allies — which officials say has come as a shock to Putin — the visit would instead expose the cracks that still do exist.

Still, they set to work engaging with their US counterparts to arrange the so-called “deliverables” — those items leaders can announce afterward to show their various constituencies they are able to get things done.

Even as Biden was flying to Europe on Wednesday, the talks continued. Aboard Air Force One, the President’s various policy experts streamed in and out of his cabin in the nose of the airplane, updating him on progress toward the myriad items he was hoping to accomplish.

Biden’s top national security aide described the scene like “speed dating with the President on every topic under the sun” — albeit with stakes higher than perhaps any other moment in recent memory.

As it turns out, Biden’s visit to Brussels did yield breakthroughs, including the announcement of a joint task force with Europe to wean it from its dependence on Russian oil and gas. Yet afterwards, even Biden acknowledged the extraordinary last-minute gathering was unlikely to cause Russia to ease its slaughter in Ukraine, at least in the near term.

“The answer is no,” Biden said when asked directly whether anything that happened in Brussels would cause Putin to alter course. Instead, he said “the single-most important thing is for us to stay unified” for months to come, which he said would eventually erode Putin’s ability and will to carry on.

“We have to demonstrate — the reason I asked for the meeting — we have to stay fully, totally, thoroughly united,” he said.

President steels the West for a long battle

It was the clearest sign yet that 30 days into Russia’s war, Biden and his team do not believe the bloody conflict in Ukraine is nearing an end.

“This battle will not be won in days or months,” Biden said during his speech on Saturday afternoon. “We need to steel ourselves for a long fight ahead.”

Even Russia’s claim Saturday to be narrowing its military objectives was privately met with skepticism from American officials, who said they’d look instead to what Putin does with his forces in the country before making an assessment.

One of Biden’s aims in visiting Europe was to inject a human dimension into his decision-making by meeting with refugees and those helping them, along with American soldiers he’d deployed along NATO’s eastern edge to act as a deterrent to Putin.

Biden said he had hoped to see more, longing to visit Ukraine itself to bear witness to its suffering. As a senator and vice president, Biden was a regular visitor to American war zones, a fact he mentioned when meeting troops positioned about 60 miles from the border with Ukraine.

“I’ve been in and out of Iraq and Afghanistan about 40 times,” he recalled.

Yet slipping over the border into Ukraine was never seriously considered by Biden’s aides. Unlike a stop in Iraq or Afghanistan, where US bases and personnel can help secure the airspace, Ukraine is not an American war zone — a fact that loomed over Biden’s trip in ways both logistical and philosophical as he worked to define the next phase of the conflict.

For Ukrainians watching from their capital of Kyiv, this week’s summits proved frustratingly disappointing. NATO leaders remain roundly opposed to calls for a no-fly-zone from President Volodymyr Zelensky, who didn’t even bother asking again during virtual remarks to the NATO summit on Wednesday. Instead, he simply pointed out he’d never received a clear answer to his request.

“We are very disappointed, in all honesty. We expect more bravery. Expected some bold decisions. The alliance has taken decisions as if there’s no war,” said Andriy Yermak, head of the Office of the President of Ukraine, in a live interview with the Atlantic Council on Friday.

Even Biden’s pledge Wednesday to response proportionally should Putin use chemical weapons in Ukraine was viewed as cold comfort by some Ukrainian officials.

“If the whole world is so afraid of Putin, why is Biden saying we’ll change our mind if there’s a chemical attack? Do you understand how cruel this sounds?” Rudik asked.

Others in the region — at least those covered by NATO’s collective defense alliance — felt more assured.

“So, thank you for your presence,” he said. “And thank you, first and foremost, for your incredible leadership.”