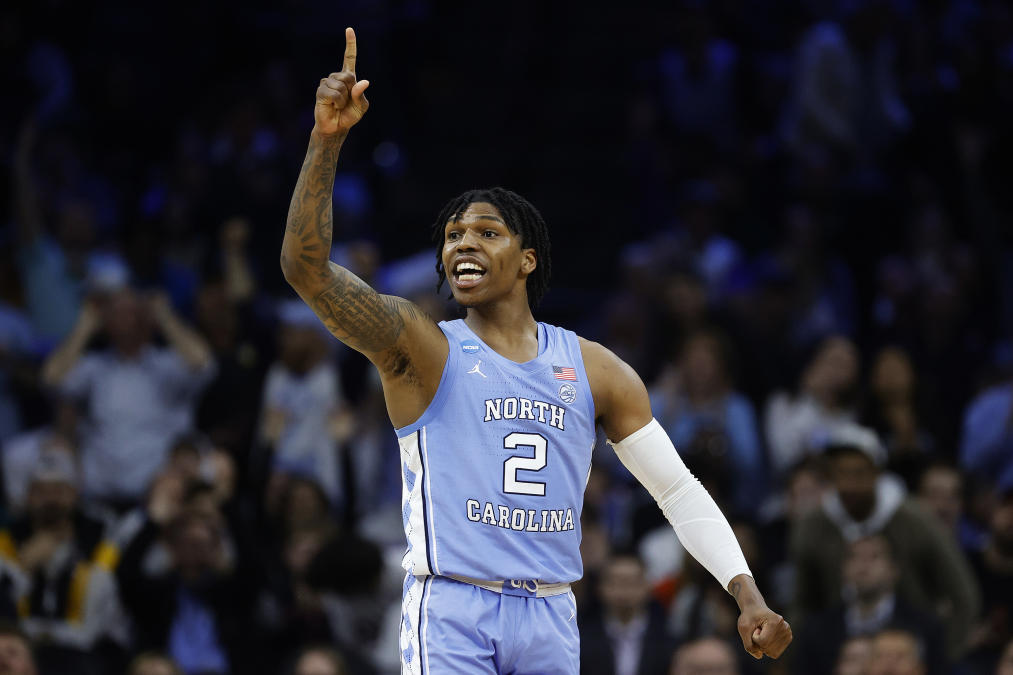 No longer is the first-ever NCAA tournament matchup between Duke and North Carolina some far-fetched possibility.

That dream showdown will happen in the national semifinals next Saturday if the Blue Devils and Tar Heels can both win one more game.

Caleb Love willed North Carolina to the Elite Eight on Friday night with a flurry of late-game twisting layups and deep 3-pointers. The streak-shooting sophomore guard changed shoes after halftime and then scored all but three of his 30 points in the second half, rallying the eighth-seeded Tar Heels to a 73-66 victory over fourth-seeded UCLA.

Love’s two biggest baskets were 3-pointers in the final two minutes of what had been a tense, back-and-forth second half.

The first, set up by an acrobatic Armando Bacot save while falling out of bounds, tied the score at 64.

The second, which came via an off-ball screen from Brady Manek, gave North Carolina a three-point lead that the Tar Heels did not relinquish.

What caused Love to catch fire after halftime after a 1-for-8 first half? Love credited his confidence … and a superstitious suggestion from North Carolina director of basketball operations Eric Hoots to switch from black Jordans to Carolina Blue.

“I never play good in black shoes, so he told me to change,” Love said with a smile. “It worked out.”

North Carolina’s victory continues an improbable surge from the NCAA tournament bubble to the cusp of the Final Four. The Tar Heels now need only to beat 15th-seeded March darling, St. Peter’s, on Sunday to advance to New Orleans.

Duke advanced to the Elite Eight on Thursday night by not missing a shot in the final eight-plus minutes to rally past Texas Tech. The Blue Devils are a slim favorite to beat Arkansas on Saturday in the West Regional title game.

Only four times before this season have Duke and North Carolina ever made the Elite Eight in the same year. Only in 1991 did they both reach the Final Four.

While Cinderella doesn’t often feature four- and five-star recruits nor wear North Carolina across its chest, the Tar Heels being a win from the Final Four would have been difficult to predict as recently as mid-February. This is a team that dropped five games by 17 or more points and sleepwalked through an embarrassing nine-point home loss to woeful Pittsburgh on February 16.

Davis reinforced his message the next day via a film session featuring 20 consecutive clips of North Carolina defensive breakdowns. Immediately after that, the Tar Heels produced what Davis called their best practice of the season.

“After practice, I said, ‘Why would you guys play this hard against each other and not against an opponent?’ Davis said. “For whatever reason, that seemed to resonate in them.”

To say the least.

Since the Pittsburgh loss, North Carolina has been the fourth-best team in the country, according to Bart Torvik’s efficiency rankings. The Tar Heels entered Friday having won eight of nine including their win at Duke to spoil Mike Krzyzewsk’s retirement party, their dismantling of Marquette in the opening round of the NCAA tournament and their overtime victory over reigning national champion Baylor two nights later.

Coming into Friday’s game, UCLA appeared to be one of the toughest opponents North Carolina had faced during its late-season surge. The Bruins returned virtually their entire roster from last season when they went from the First Four to the Final Four and then took unbeaten Gonzaga to overtime in an instant classic.

While UCLA led for much of Friday’s game, the Bruins were undone by two factors: Jaime Jaquez’s lingering right ankle injury and an inability to stop North Carolina’s high pick-and-roll.

Time and time again, the Tar Heels used the high ball screen to get Love or RJ Davis a favorable matchup against a UCLA big man. Love, in particular, exploited those mismatches, often driving past Cody Riley or rising and firing from deep if given too much space.

“Coach Davis just wanted me to attack the basket,” Love said. He feels that I’m best when I’m going downhill. I got a few layups going and then the outside shot started to fall.”

While Jules Bernard scored a team-high 16 points and Tyger Campbell had 15 points and 6 assists, the Bruins needed more than their go-to man could give them to overcome Love’s lethal second half. Jaquez played valiantly on the ankle injury he reinjured against Saint Mary’s, but he finished with just 10 points on 5-for-18 shooting.

Jaquez missed a couple of shots in the final minute as UCLA tried to respond to Love’s heroics. After the last one, North Carolina could celebrate another big win and look ahead, first to Saint Peter’s and perhaps after that to Duke.