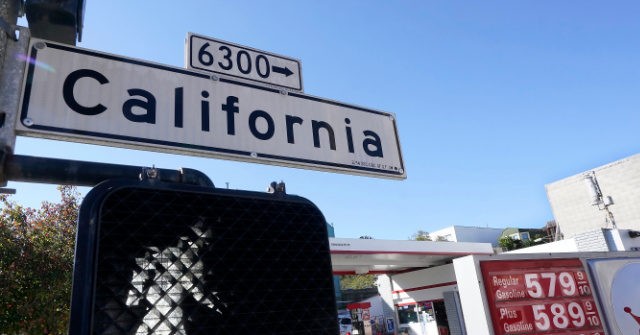 California’s average gas price reached a record high of $5.90 per gallon on Friday, according to AAA.

Nationwide, the average price of gas ($4.24) has increased by about 70 cents since Russia invaded Ukraine. But gas prices had already risen about a full $1.00 since President Joe Biden assumed office and waged war on American energy independence.

Biden says record high gas prices are an “opportunity” to “double down” on transitioning away from fossil fuels pic.twitter.com/H6ISmgiK0s

Throughout his first year in office, Biden has made it difficult for oil companies to gain financing to drill on private lands. Biden has also halted new drilling on public lands and terminated the Keystone pipeline project that would have transported vast amounts of oil to American refineries.

On Wednesday, Gov. Gavin Newsom (D) proposed countering Biden’s high gas prices by handing out $400 direct payments per vehicle. The payments would be limited to two vehicles per family.

A food truck owner to CNN about #Bidenflation and the #BidenGasHike: “It just sucks” pic.twitter.com/rRt0NEsL2D

Gas prices are high in California because of higher fuel taxes and stricter red tape. As a result, the average driver in California is charged about $300 in excise gas tax each year, according to Newsom’s office.

The scheme would cost $11 billion of taxpayers’ money, according to the wall street journal. Newsom’s plan still must be approved by the state’s legislature.

“They’re not as high in real terms as they were earlier in this century.” pic.twitter.com/wVqibcBqvu