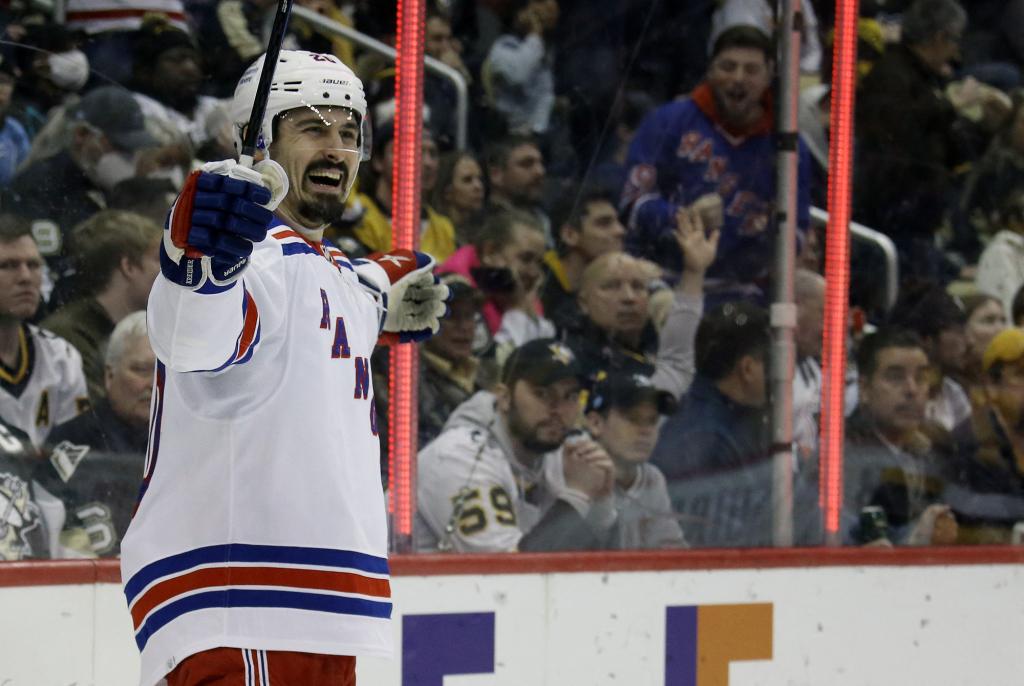 DETROIT — Maybe the Penguins’ television broadcast had the right idea with its comical three keys to beating the Rangers on Tuesday night:

Kreider scored the game-winner in the Rangers’ 3-2 victory after hanging around the home team’s net, taking a shot off the wall and whacking it past Penguins netminder Tristan Jarry while on a third-period power play.

The goal was his 45th of the season, good for third in the NHL, as well as his league-leading 23rd power-play goal. It was Kreider’s ninth game-winner, a team-high statistic that is also tied for the franchise record.

Kreider is now eyeing the Rangers’ single-season goals record, 54 set by Jaromir Jagr in 2005-06. At the rate he’s going, Kreider is on pace to notch 55 goals and 23 assists for 78 points. One more power-play goal will tie Kreider with Jagr in that category, as well.

“That’s what Kreids does,” head coach Gerard Gallant said. “Shot from the point missed the net and he’s right there for the garbage. He’s scored a lot of goals in the blue paint and he’s doing a great job.”

Entering Wednesday’s matchup with the Red Wings at Little Caesars Arena, Kreider was riding a five-game point streak. He recorded five goals and four assists over that span. In the Rangers’ last 10 games, Kreider has gone without a point in only three of them.

Looking at the bigger picture, Kreider is in the midst of a career season, in which he has already blown by his previous career-best point total by 11 with 14 regular-season games left after Wednesday. Unlike years past, the 30-year-old winger has shown no signs of slowing down.

“I think the easiest way to defend is by playing offense,” said Kreider, who also earned the secondary assist on Frank Vatrano’s game-tying goal in the second period Tuesday. “Making the defensemen turn and trying to force them into turnovers and playing in their end. … For us, it’s about taking away their time and space.”

Kreider and Mika Zibanejad have seemingly peaked in their chemistry on the Rangers’ top line. The way one always knows where the other is on the ice and the familiarity with each other’s tendencies has made for a lethal combination.

And with the trade-deadline addition of Vatrano, who played for Team USA at the World Championships with Kreider in 2018-19, the first unit has looked even faster and even more of a scoring threat than it already was.

The new-look top line has scored four goals and allowed none in 36:33, according to Natural Stat Trick, while also holding an 8-3 edge in high-danger scoring chances.

“He’s a really detailed, really honest player,” Kreider said of Vatrano. “Hard working [with a] good feeling for the game. He moves really well, shoots the puck incredibly well, sees the ice well and is really committed to winning hockey games. You see him getting pucks out of lines, playing a mature game, blocking shots at a big time.

“He’s been a terrific addition, like all the other guys have at the deadline. He’s been awesome for us and a fun guy to play with.”