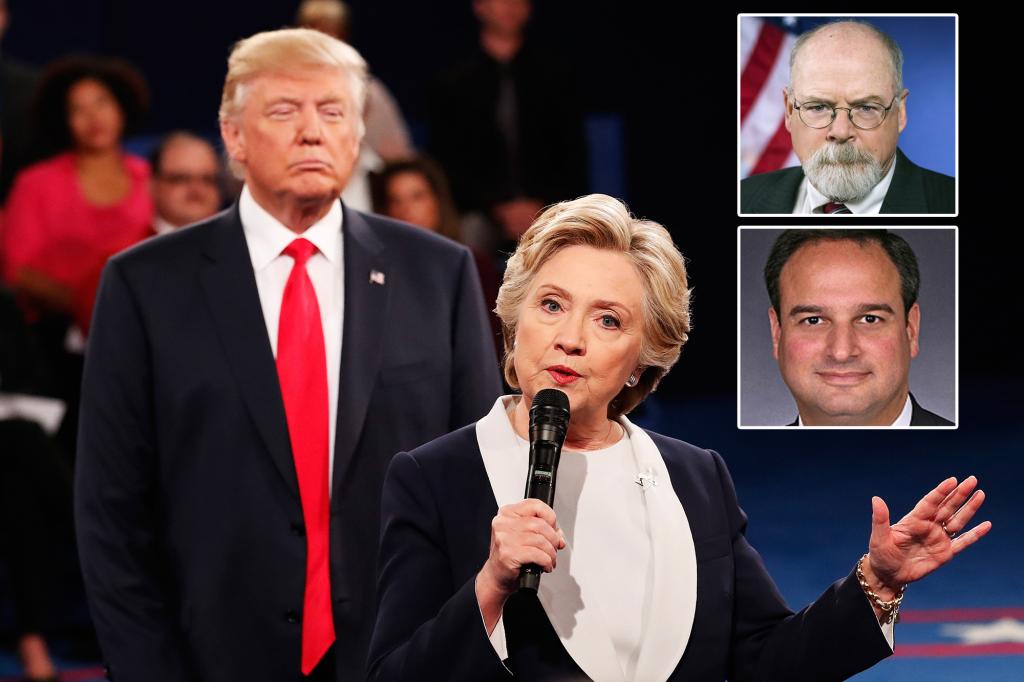 Hillary Clinton’s campaign, her lawyer and a tech executive took part in a “joint venture” to gather and spread dirt about Donald Trump during the 2016 presidential campaign, Special Counsel John Durham charges in a new filing.

The bombshell claim was made in a 48-page motion filed late Monday arguing for the admission of additional evidence ahead of Clinton campaign lawyer Michael Sussmann’s pending trial for allegedly lying to the FBI.

At the heart of the case is a Sept. 18, 2016 text message Sussmann sent to then-FBI General Counsel James Baker, which was reproduced in Monday’s filing.

“​Jim – it’s Michael Sussmann. I have something time-sensitive (and sensitive) I need to discuss,” the lawyer wrote. “Do you have availability for a short meeting tomorrow?​ I’m coming on my own – not on behalf of a client or company – want to help the Bureau. Thanks.”

In fact, prosecutors say, Sussmann — then a cybersecurity lawyer at powerhouse Democratic law firm Perkins Coie — had deceived Baker and was acting on behalf of the Clinton campaign when the two met the following day.

During that sitdown, Sussmann allegedly gave Baker information suggesting that servers at the Trump Organization were communicating with servers at Moscow-based Alfa-Bank. That claim was amplified by the Clinton campaign to suggest that Trump was colluding with the Kremlin.

According to Monday’s filing, preparation for Sussmann’s meeting with Baker began in “late July and early August,” when “Tech Executive-1,” who has since been identified as Rodney Joffe, began telling employees at Virginia-based Neustar — where he was a senior vice president — to “mine and assemble Internet data that would support an ‘inference’ or ‘narrative’ tying Trump to Russia.”

Joffe, who is not named in the filing, allegedly said the point of the effort “was to please these ‘VIPs,’” which Durham says refers to Sussmann, his Perkins Coie colleague Marc Elias — the Clinton campaign’s general counsel — and the campaign itself.

Prosecutors also allege that Joffe ordered an executive at two other companies he owned to do a data deep-dive into Trump, saying “he was working with a person at a firm in Washington, DC with close ties to Hillary Clinton campaign and the Democratic Party .”

The document adds that Joffe even emailed the executive the home addresses, email addresses, IP addresses and other personal information of “various Trump associates,” including spouses and other family members.

According to Durham, the CEO was “highly uncomfortable” with Joffe’s ask, but complied because he “was a powerful figure.”

The dive into Trump was given the code name “Crimson Rhino.”

Eventually, prosecutors say, Joffe and his associates “exploited” Internet traffic relating to a healthcare provider to assemble information from Trump Tower and Trump’s Central Park West apartment building. Among the allegations made by Sussmann were that Trump and his associates were using a type of Russian-made cell phone near the White House and other locations.

The most notorious of claims was that Moscow security services possessed a tape of Trump in a Moscow hotel room with prostitutes who were supposedly urinating on a bed where the Obamas had previously stayed.

The Clinton campaign kept quiet about its engagement with Fusion GPS — so quiet that last week, the Federal Election Commission fined the campaign and the Democratic National Committee $8,000 and $105,000, respectively, for mislabeling payments to the firm that were routed through Perkins Coie as “ legal advice and services” rather than opposition research.

According to the filing, Sussmann even met with Steele himself (identified as “UK Person-1”) and Fusion GPS employees at Perkins Coie’s offices in the summer of 2016.

Prosecutors say that while Sussmann told Congress in 2017 that he only meant to “vet” Steele, the onetime British spy tested under oath in a UK legal proceeding that Sussmann shared the Alfa-Bank allegation with him and Fusion GPS ordered Steele to “research and produce intelligence reports” about Alfa-Bank.

Allegations about the Trump Organization and Alfa-Bank server ties also allegedly were shared by Steele with State Department officials, while Fusion GPS passed them on to at least one Department of Justice official.

After these introductions were made, Durham alleges, Sussmann and Fusion GPS employees shopped the Alfa-Bank allegations to the mainstream media. The claims about the server traffic between Trump Tower and Alfa-Bank were the subject of several contemporary reports ahead of Election Day 2016. The most notable story, by Franklin Foer, was published by Slate that October and bore the headline: “Was a Trump Server Communicating With Russia?”

Finally, the Alfa-Bank claims were allegedly compiled by Joffe and Sussmann into a “white paper” that Sussmann turned over to Baker when the two met. According to the indictment of Sussmann, the lawyer billed the Clinton for the time drafting the document.

On the same day the Slate story about the Trump Organization and Alfa-Bank came out, the New York Times reported that the FBI had looked into Sussmann’s allegations and concluded that “there could be an innocuous explanation, like a marketing email or spam, for the computer contacts.”

According to the indictment, Sussmann pursued the Alfa-Bank angle even after Clinton’s defeat by Trump in the 2016 election. In February 2017, he allegedly provided an “updated set of allegations” about the Russian bank and its relation to the Trump campaign to another US government agency that has since been identified as the CIA.

Sussmann was indicted in September 2021 and has pleaded not guilty to the charge of making false statements.

Durham’s motion seeks the admission of documents including notes of conversations two other FBI officials had with Baker about his Sept. 19, 2016 meeting with Sussmann; emails involving Sussmann, Joffe, Elias, Clinton campaign officials and Fusion GPS employees; and a deposition by Sussmann before the House Intelligence Committee in December 2017.

In that testimony, Sussmann was asked if he was acting on his “own volition” when he contacted Baker and the CIA about the Alfa-Bank allegations. He answered: “No.”

“So did your client direct you to have those conversations?” he was asked.

“Yes,” he replied, before attempting to backtrack moments later.

“[W]hen you say my client directed me, we had a conversation, as lawyers do with their clients, about client needs and objectives and the best course to take for a client,” he said. “And so it may have been a decision that we came to together. I mean, I don’t want to imply that I was sort of directed to do something against my better judgment, or that we were in any sort of conflict.”

In a flurry of filings Monday, Sussmann’s legal team argued that much of the evidence sought by Durham was either inadmissible as hearsay or irrelevant to the charge against their client.

“The Special Counsel has not charged a substantive scheme to defraud the government, nor has he charged a conspiracy to defraud the government,” one motion read. “The manner in which the [internet] data was gathered, the objective strength and reliability of that data and/or conclusions drawn from the data, and the information that Christopher Steele separately provided to the FBI all have no bearing on the only crime the Special Counsel thing to charge: whether Mr. Sussmann falsely stated that he was not acting on behalf of a client when he met with Mr. Baker.”

Sussmann’s attorneys further accuse Durham of trying to “promote a baseless narrative that the Clinton Campaign conspired with others to trick the federal government into investigating ties between President Trump and Russia.

“But there was no such conspiracy; the Special Counsel hasn’t charged such a crime; and the Special Counsel should not be permitted to turn Mr. Sussmann’s trial on a narrow false statement charge into a circus full of sideshows that will only fuel partisan fervor.”

In a separate filing, Sussmann’s attorneys argued that the judge in the case should force Durham to offer Joffe immunity from prosecution or dismiss the case.