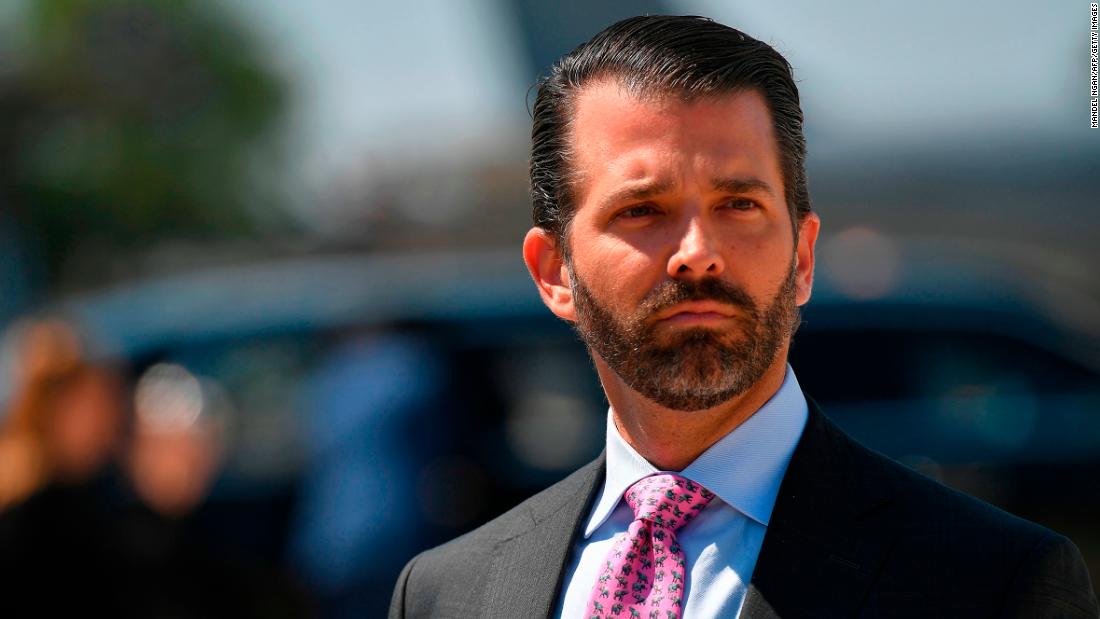 In the text, which has not been previously reported, Donald Trump Jr. lays out ideas for keeping his father in power by subverting the Electoral College process, according to the message reviewed by CNN. The text is among records obtained by the House select committee investigating January 6, 2021.

“It’s very simple,” Trump Jr. texted to Meadows on November 5, adding later in the same missive: “We have multiple paths We control them all.”

In a statement to CNN, Trump Jr.’s lawyer Alan S. Futerfas said, “After the election, Don received numerous messages from supporters and others. Given the date, this message likely originated from someone else and was forwarded.”

The November 5 text message outlines a strategy that is nearly identical to what allies of the former President attempted to carry out in the months that followed. Trump Jr. makes specific reference to filing lawsuits and advocating recounts to prevent certain swing states from certifying their results, as well as having a handful of Republican state houses put forward slates of fake “Trump electors.”

If all that failed, according to the Trump Jr. text, GOP lawmakers in Congress could simply vote to reinstall Trump as President on January 6.

The text from Trump Jr. is revealing on a number of levels. It shows how those closest to the former President were already exchanging ideas for how to overturn the election months before the January 6 insurrection — and before all the votes were even counted. It would be another two days before major news outlets declared Joe Biden the winner on November 7.

The text also adds to a growing body of evidence of how Trump’s inner circle was actively engaged in discussing how to challenge the election results.

On March 28, Judge David Carter, a federal judge in California, said that Trump, along with conservative lawyer John Eastman, launched an “unprecedented” campaign to overturn a democratic election, calling it “a coup in search of a legal theory.”

In the weeks following the 2020 election, Trump and his allies eventually filed more than 60 unsuccessful lawsuits in key states, failing to convince the courts that his claims about a stolen election were justified, or uncover any evidence of widespread voter fraud.

They also called for various recounts based on those same unfounded voter fraud claims. A number of states conducted recounts in the months after the election, though none of them revealed any fraud substantial enough to have changed the outcome of the vote in any state.

While Trump Jr. was publicly pushing various vote fraud conspiracy theories and generally casting doubt about the results in states like Pennsylvania and Georgia, his text to Meadows reveals there were other ideas being discussed privately.

Specifically, Trump Jr. previews a strategy to supplant authentic electors with fake Republican electors in a handful of states. That plan was eventually orchestrated and carried out by allies of the former President, and overseen by his then-attorney Rudy Giuliani.

In his text to Meadows, Trump Jr. identifies two key dates in December that serve as deadlines for states to certify their electoral results and compel Congress to accept them. Though the dates are largely ceremonial, in his text Trump Jr. appears to point to them as potential weaknesses to be exploited by casting doubt on the legitimacy of the election results.

If secretaries of state were unable to certify the results, Trump Jr. argues in his text to Meadows that they should press their advantage by having Republican-controlled state assemblies “step in” and put forward separate slates of “Trump electors,” he writes .

Trump Jr.’s text, however, refers to an untested legal theory that state houses are the ultimate authority in elections and can intervene to put forward a different slate of electors than those chosen by the voters, when in reality this is a ceremonial process and the outcome is essentially a foregone conclusion.

The Justice Department and the House committee are both investigating the fake electors plot within the context of what unfolded on January 6 and Trump’s broader effort to overturn the election.
The strategy floated by Trump Jr. is similar to what was outlined by former Texas Governor and Trump Energy Secretary Rick Perry, who texted Meadows on November 4 suggesting three state legislatures ignore the will of their voters and deliver their states’ electors to Trump.

“HERE’s an AGGRESSIVE (sic) STRATEGY: Why can t (sic) the states of GA NC PENN and other R controlled state houses declare this is BS (where conflicts and election not called that night) and just send their own electors to vote and have it go to the SCOTUS,” Perry’s text message read.

A spokesman for Perry told CNN at the time that the former Energy secretary denies being the author of the text. However, multiple people who know Rick Perry previously confirmed to CNN that the phone number the committee has associated with that text message is Perry’s number.

‘We control them all’

Trump Jr. also texts Meadows that Congress could intervene on January 6 and overturn the will of voters if, for some reason, they were unable to secure enough electoral votes to tip the outcome in Trump’s favor using the state-based strategy.

That option, according to Trump Jr.’s text, involves a scenario where neither Biden nor Trump have enough electoral votes to be declared a winner, prompting the House of Representatives to vote by state party delegation, with each state getting one vote.

“We either have a vote WE control and WE win OR it gets kicked to Congress 6 January 2021,” he texts Meadows.

In a series of memos in early January, conservative lawyer John Eastman proposed a variation of that idea.

Eastman’s memo laid out a six-step plan for Vice President Mike Pence to overturn the election for Trump, which included throwing out the results in seven states because they allegedly had competing electors. In fact, no state had actually put forward an alternate slate of electors — there were merely Trump allies claiming without any authority to be electors.

Eastman, who has been subpoenaed by the House select committee and is fighting to keep some of his records secret from investigators, was accused by Carter of likely engaging in a criminal conspiracy with Trump to overturn the election.

“Dr. Eastman has an unblemished record as an attorney and respectfully disagrees with the judge’s findings,” his attorney Charles Burnham said in response to the judge’s ruling.

Trump Jr. ends his November 5 text by calling for a litany of personnel moves to solidify his father’s control over the government by putting loyalists in key jobs and initiate investigations into the Biden family.

As Trump refused to concede in the days and weeks after the 2020 election, rumors swirled that he was still considering firing Wray, along with several other top officials with whom he had grown frustrated.
Trump and his allies sharply criticized Wray for failing to produce information that they claimed would be harmful to the President’s political enemies, including Biden. CNN previously reported that the prospect of Trump firing Wray hung over the FBI for weeks, dating to before Election Day.

While Wray remains in his post and Barr resigned in mid-December 2020 without naming a special prosecutor to investigate the Bidens, Trump Jr.’s text underscores just how precarious the situation at DOJ was in the immediate aftermath of the election.

The same is true for Trump Jr.’s recommendation that Meadows replace Wray with Grenell, someone who not only lacked the usual qualifications to lead the FBI but also had a proven track record of doing the former President’s bidding.

On November 5, Biden held a slim lead over Trump in Nevada but appeared poised to win the state’s six electoral votes. That same day, Grenell and Trump campaign officials announced they were filing a new lawsuit to “stop the counting of illegal votes” but provided no evidence to support their claims of rampant fraud.