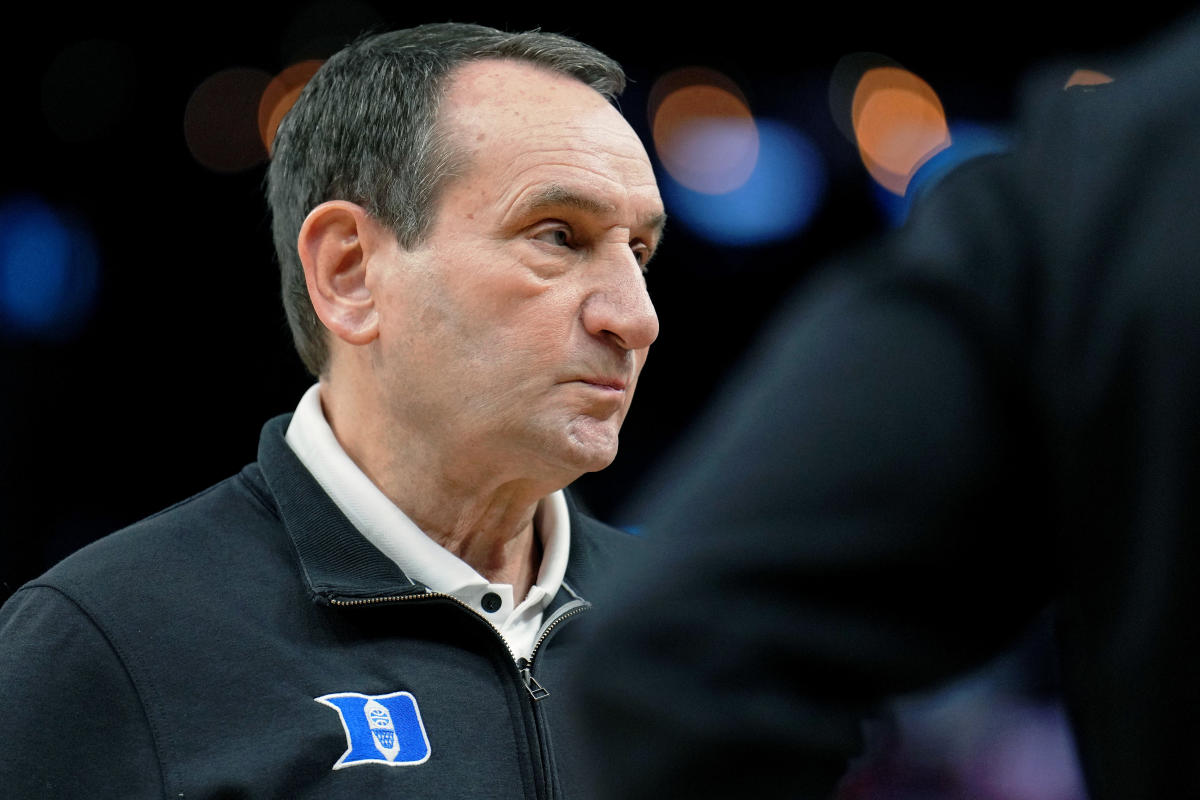 Krzyzewski hugged his players and beamed with joy after his Blue Devils finished off a 78-69 Elite Eight victory over Arkansas to extend his farewell tour another week.

Showing superior individual talent and impressive maturity, Duke left no doubt who the better team was. The Blue Devils opened a 12-point halftime lead and responded with a knockout punch after Arkansas trimmed its deficit to five early in the second half.

By vanquishing the fourth-seeded Razorbacks, Krzyzewski surpassed John Wooden for the most Final Four appearances by any college coach. UCLA’s Wizard of Westwood went to the national semifinals 12 times from 1962 to 1975.

Awaiting Duke in New Orleans will either be the NCAA tournament’s darlings or the Blue Devils’ biggest rival. North Carolina needs only to beat 15th-seeded Saint Peter’s on Sunday to set up the first-ever NCAA tournament clash between the Tobacco Road rivals.

Only four times before this season have Duke and North Carolina ever made the Elite Eight in the same year. Only in 1991 did they both reach the Final Four.

While Duke boasts a loaded roster featuring a half dozen NBA prospects, the Blue Devils’ youth for most of the season was as conspicuous as their talent. There were a couple times late in early March when the moment looked too big for them, when they appeared to buckle under the pressure to send Krzyzewski out with a perfect last hurrah.

After North Carolina spoiled Krzyzewski’s last game at Cameron Indoor Stadium with a 94-81 upset, the legendary coach grabbed a microphone and apologized to his dozens of ex-players in attendance and to a shell-shocked, speechless crowd. “Let me just say — that was unacceptable,” he said. “Today was unacceptable, but the season has been very acceptable. And I’ll tell you, the season isn’t over, alright?”

Out of that blistering speech came some productive conversations that helped pave Duke’s path to New Orleans. Krzyzewski hinted Friday that he regretted how he handled the anguish of that loss and that he had spoken to his players about it.

“I felt really bad for them,” Krzyzewski said. “When I said unacceptable, it wasn’t that they were unacceptable. It was the result that was unacceptable, and I wanted to make sure that that was not misconstrued by them.”

Another subtle yet significant change Krzyzewski has made is to utilize the NCAA tournament’s elongated 20-minute halftimes differently. Instead of immediately launching into a speech addressing what went right and what went wrong, Krzyzewski has spent more time listening to feedback from his players.

“When I come in the locker room, I just pull out a chair, and I sit with them for about five minutes,” Krzyzewski said. “It’s just, okay, here’s where we’re at and just talk to them.”

If the NCAA tournament’s first two weeks are any indication, Duke appears to be responding well to that softened approach. The young Blue Devils appear to be growing up and handling the pressure to send Krzyzewski into retirement with another ring.

They rallied for a second-round win over Michigan State despite falling behind by five with five minutes to play. Then they looked overwhelmed early by Texas Tech’s vaunted defense in the Sweet 16, only to shoot 71 percent from the field in the second half and not miss a single shot in the final eight-plus minutes.

There was no need for any late comebacks against Arkansas thanks in part to a game-changing 8-0 Duke surge to end the first half. The Razorbacks went into halftime down 12 despite being within 4-6 points for virtually the entire half.

The mistake that truly hurt Arkansas was Chris Lykes’ decision to hoist a 3-pointer with just over 10 seconds left in the half. By not further running down the clock, Lykes gave Trevor Keels time to punish the Razorbacks with a back-breaking 3-pointer at the buzzer.