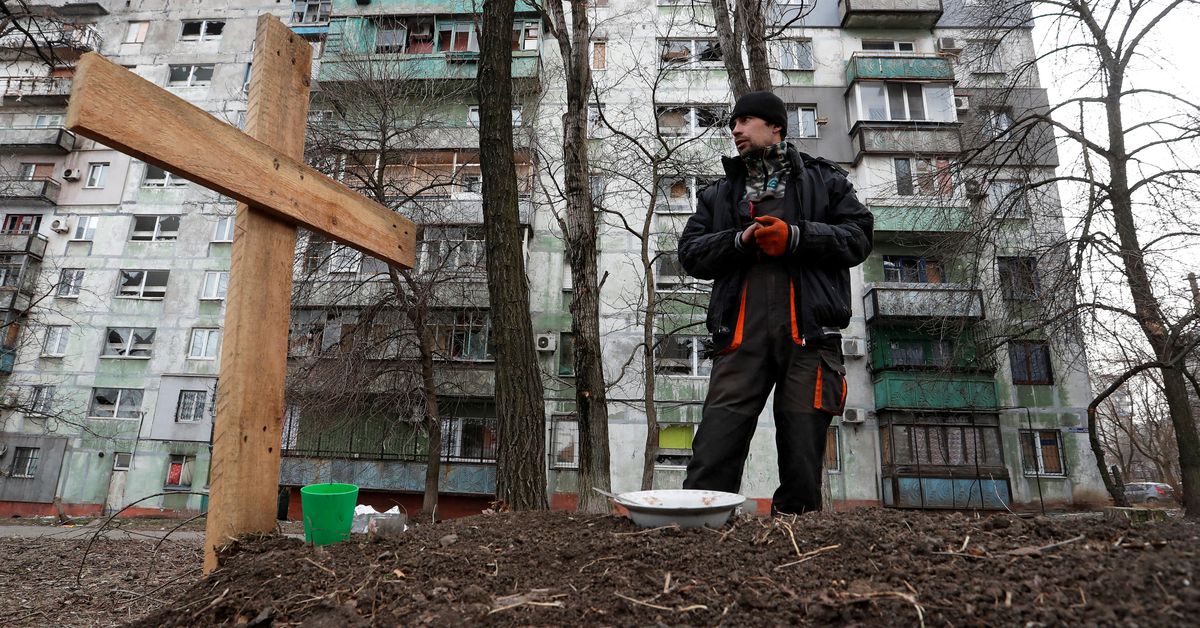 Local resident Pavel, 42, stands next to the grave of his friend Igor, who was killed by shelling while they were riding together in a car during Ukraine-Russia conflict, in a residential area in the besieged southern port city of Mariupol, Ukraine March 30, 2022. REUTERS/Alexander Ermoshenko/File Photo

LVIV, Ukraine/GENEVA, March 31 (Reuters) – A convoy of Ukrainian buses set out for the southern port city of Mariupol on Thursday to try to deliver humanitarian supplies and bring out civilians, Deputy Prime Minister Iryna Vereshchuk and the Red Cross said.

Vereshchuk said 45 buses were on their way to Mariupol after the International Committee of the Red Cross (ICRC) confirmed Russia had agreed to open a safe corridor. read more

In Geneva, the ICRC said its convoy was on the way to the besieged city, but called on both sides to agree the exact terms for the safe passage of civilians.

“For logistics and security reasons, we’ll be ready to lead the safe passage operation tomorrow, Friday, provided all the parties agree to the exact terms, including the route, the start time and the duration,” ICRC spokesperson Ewan Watson said.

“It’s desperately important that this operation takes place. The lives of tens of thousands of people in Mariupol depend on it,” he said.

Robert Mardini, ICRC director-general, in an interview with Reuters on Tuesday, called on Ukraine and Russia to agree on safe evacuation of civilians from Mariupol and other frontline areas, where vital supplies are running out. read more

To date in the five-week-old conflict, the ICRC has led two evacuations of civilians from the northeastern city of Sumy. read more

The Mariupol mayor said this week that up to 170,000 residents were trapped there with no power and dwindling supplies.

“There are 45 buzzards en route to Mariupol,” Vereshchuk said in a statement on Thursday.

The city, which usually has a population of more than 400,000, has been a strategic focus of Russia’s invasion of Ukraine and has suffered near-constant bombardment.

Repeated attempts to organize safe corridors have failed, with each side blaming the other. Russia denies targeting civilians in its assault on Ukraine.

Reporting by Pavel Polityuk in Lviv and Stephanie Nebehay in Geneva; Editing by Timothy Heritage and Janet Lawrence