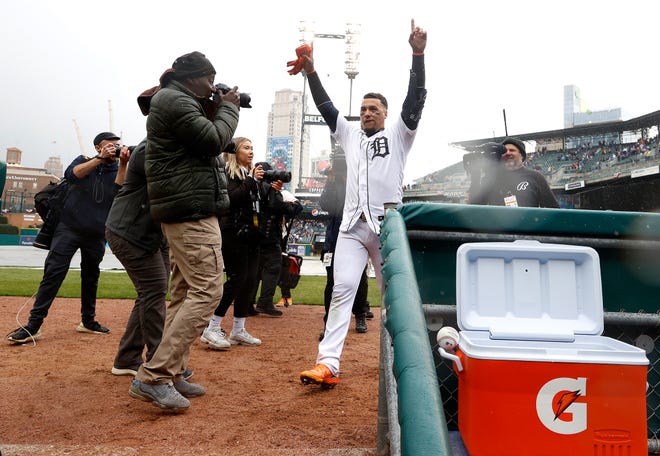 The ball ricocheted off the right-field wall, scoring Austin Meadows, for a 5-4 victory Friday afternoon on another chilly Opening Day in front of 43,480 fans at Comerica Park.

The play was initially ruled an out, but replay review overturned the call, and the Tigers came pouring out of the dugout to mob Baez as the crowd went wild.

There were many other heroes as well.

Eric Haase, the Dearborn Divine Child alum, tied the game with one out in the ninth on a solo home run to left field. Meadows, one batter later, ripped a triple to right-center field to set up Baez, and finished 1-for-2 with three walks in his Tigers debut after being acquired Monday from Tampa Bay.

Miguel Cabrera also came up large one inning earlier, slinging a tying two-run single to right-center field to knot the score at 3-3. Cabrera’s base hit off Hendriks came with the bases loaded for his 2,988th career hit and the crowd erupted.

Until the Tigers’ resilience shined through once again in the final at-bat for a thrilling first victory.

MITCH ALBOM:Tigers’ Opening Day may be the start of a rekindled love affair

JEFF SEIDEL:Window is open for Tigers. Why they must step through it right now

Facing Kyle Crick in the sixth inning, Robbie Grossman was hit by a first-pitch slider and Austin Meadows worked a seven-pitch walk. Baez nearly sent the fans into a frenzy with a home run, but the ball he connected with traveled 332 feet for a flyout to the left-field warning track.

Jeimer Candelario put the Tigers on the scoreboard in the sixth with a one-out single up the middle. He trimmed the deficit to 3-1.

The next batter, Cabrera, grounded out to White Sox shortstop Leury Garcia and ensued controversy.

Garcia flipped the ball to second baseman Josh Harrison, who fired to Jose Abreu for a double play. Candelario, advancing to second base, was initially deemed safe, but the umpires ruled slide interference.

A replay review upheld the decision on the field.

Instead of Meadows scoring from third base, the Tigers — because of Candelario’s slide interference — fell into an inning-ending double play.

Baez finished 2-for-5 with two strikeouts.

He shined defensively with a web-gem for the second out in the second inning — making a backhanded pick deep in the hole at shortstop, spinning, planting his feet and throwing a dart to Spencer Torkelson at first base.

Unlike White Sox starter Lucas Giolito, though, Rodriguez wasn’t removed from his start due to an injury. He allowed three runs on four hits and two walks in four innings, throwing 83 pitches.

A surplus of those pitches were thrown in the first inning, as Rodriguez — signed to a five-year, $77 million contract this offseason — needed 31 pitches to get three outs. He also threw 27 pitches in the second.

Rodriguez recorded outs against the first two batters he faced in both innings. Then, the 29-year-old crumbled.

In the first, he struck out AJ Pollock and got Luis Robert to groundout. The next three opponents reached safely: Jose Abreu (walk), Yasmani Grandal (walk) and Eloy Jimenez (RBI single).

In the second, Rodriguez recorded a flyout and groundout but ran into trouble against Jake Burger (double), Pollock (RBI single) and Robert (RBI double).

The White Sox, on RBIs from Jimenez, Pollock and Robert, had a 3-0 lead after the third inning.

Rodriguez, who tossed 52 of 83 pitches for strikes, retired the next six batters he faced, carrying him through the fourth inning, but Hinch didn’t let his Opening Day starter return for the fifth.

He had five swings and missed, 11 called strikes and two strikeouts in his Tigers debut.

ON THE COME UP:Tigers’ Michael Pineda off to good start at Triple-A Toledo; more injury updates

The White Sox turned to Bennett Sousa, Crick, Kendall Graveman, Aaron Bummer and Hendriks for five innings out of the bullpen.