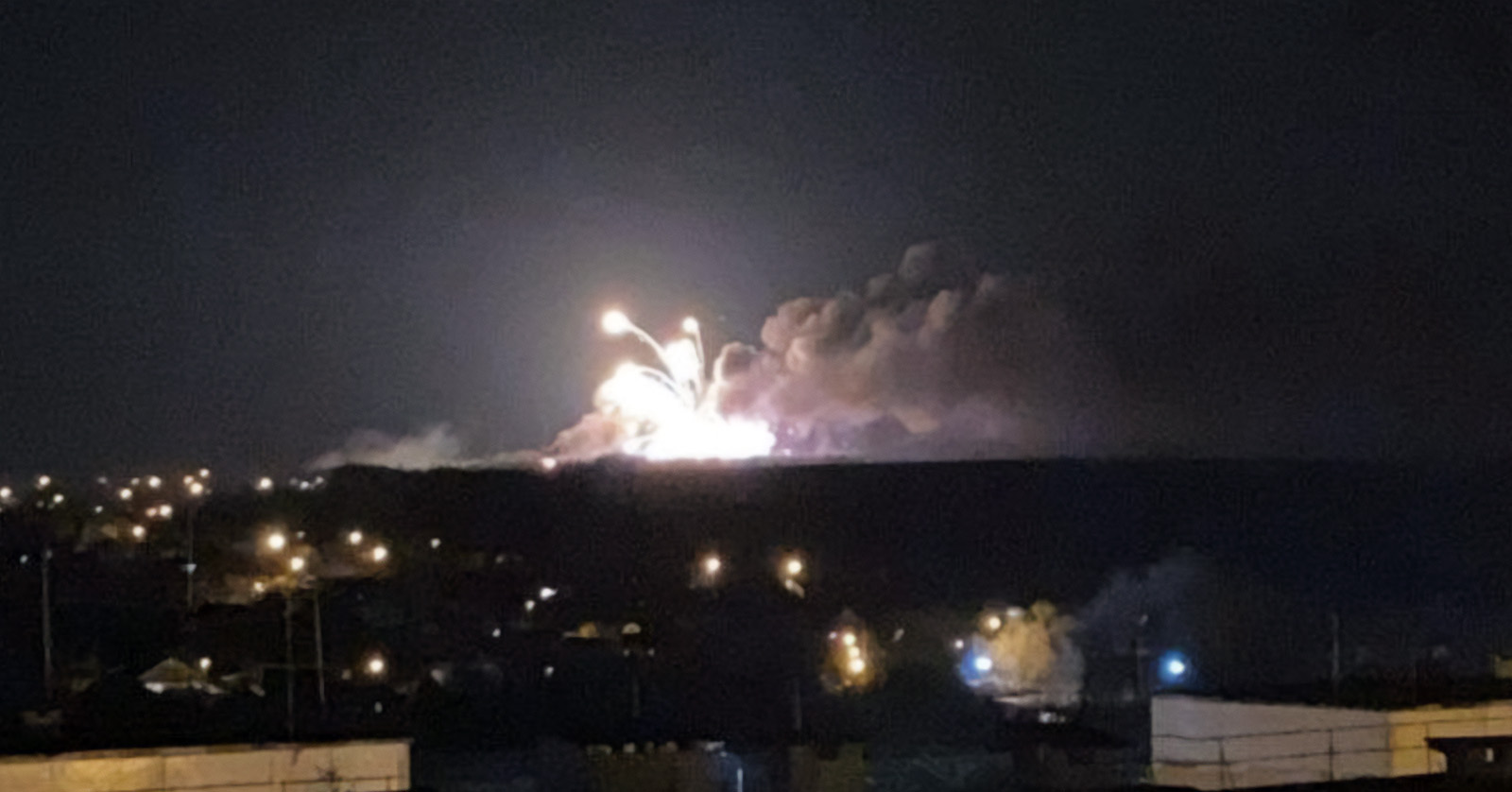 Explosions in the Russian military town of Belgorod, just a few miles away from the border, were caused by shelling from the Ukrainian side, a number of Ukrainian and Russian outlets reported late on Tuesday.

Videos and images of the explosions and ensuing fire were shared extensively on Twitter and Telegram, alongside claims that it was caused by a rare counteroffensive strike by Ukrainian forces with an OTR-21 Tochka, or “Tochka-U,” a Soviet-made tactical ballistic missile.

“Ukraine carried out a precision strike with the Tochka-U missile on an ammunition warehouse in the village of Oktyabrskoe, near Belgorod, Russia. Russia supplies its artillery attacking Ukraine with rockets and missiles stored at the facility,” Yury Butusov, a Ukrainian journalist , wrote on Tuesday night on his Facebook page.

“Judging by the explosion and the distance of the warehouse, the 19th missile brigade of the Armed Forces of Ukraine has conducted an effective effort to demilitarize and denazify Russia,” the military correspondent added, citing Ukrainian media sources.

Russian and English-language media outlets repeated the claim in their initial reporting of the story, with TASS, the Russian state news agency, writing that “preliminary analysis suggests the missile strike originated in Ukraine.”

“The missile landed on the territory of a small military training camp in the Belgorod region, wounding four military personnel,” the report said, noting that initial data indicates the strike came from Ukraine.

Multiple social media posts featuring the video of the fire also placed the blame on Ukrainian forces, while others celebrated the strike as a military win for Kyiv.

While it is extremely challenging to verify and corroborate wartime footage and reporting, most recent claims from both sides appear to suggest that the explosion was the result of an accident, rather than hostile fire.

“The explosion near Belgorod happened as a result of a fire that broke out at the ammunition depot,” Interfax, another Russian state-linked news outlet, reported on Wednesday morning, citing local officials.

Vyacheslav Gladkov, the governor of the Belgorod region, wrote on his Telegram channel that while they are “awaiting official confirmation from the Russian Defense Ministry, unconfirmed reports suggest that there was a fire at the ammunition depot” and that “the situation is now under control.” He added that no one was hurt in the incident.

Butusov, who originally cited Ukrainian media as the source of the claim about a Tochka-U strike, soon edited his Facebook post to now cite the Russian media.

Meanwhile, Ukrainian officials also denied that the Armed Forces of Ukraine were to blame, with Ukraine’s Deputy Prime Minister Iryna Vereshchuk stating on Tuesday night that the explosion was a result of negligence by Russian forces.

“It’s another example of the typical neglect of safety protocols by the Russians when handling dangerous World War II era ammunition,” Vereshchuk said.

She also called on Russia to immediately withdraw its troops from the nearby Chernobyl region, where the defunct nuclear power plant is located, and where, according to the Deputy Prime Minister, Russian forces are storing much of their weapons supplies.

Some of the confusion seen in the original reporting of the incident could be explained by the hypothesis that in fact two separate incidents occurred on the night of March 29 in the Belgorod area: shelling by Ukraine that was initially reported by TASS, and an unrelated fire that broke out at the weapons storage facility.

But while this theory could explain the contradictory reporting, Newsweek cannot independently corroborate it.

Newsweek has reached out to the Russian and Ukrainian defense ministries for comment on the incident.

All reliable information available at the moment, including statements from officials in Russia and Ukraine, suggest that the explosion at a weapons storage depot near Belgorod was the result of a human error, and not a Ukrainian airstrike. Conflicting versions in the original reporting of the fire may have been due to two separate incidents taking place, though this theory is yet to be confirmed by officials.