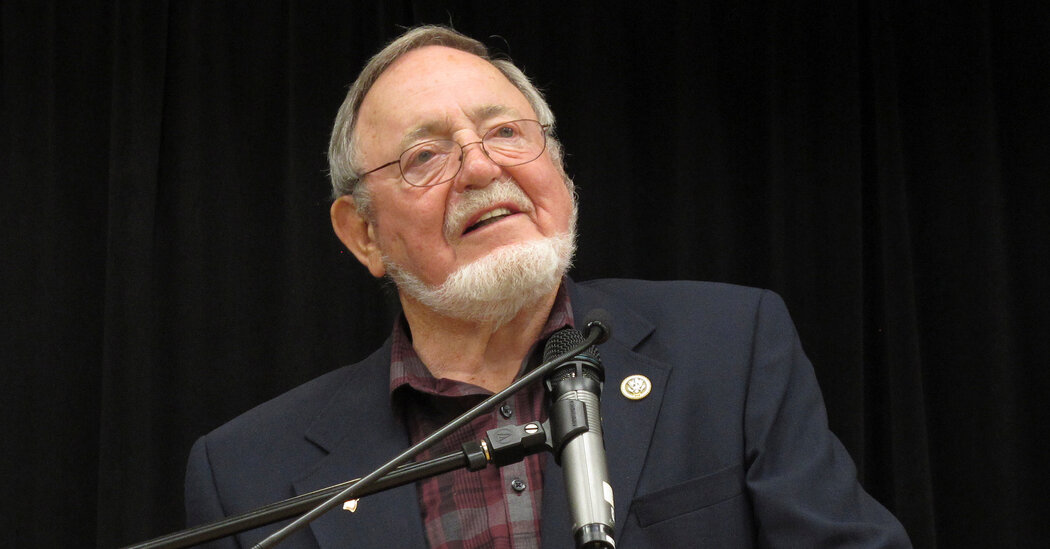 His lapses rarely hurt him at the polls. He was elected to 25 consecutive terms, usually facing moderate to light opposition and winning more than 70 percent of the vote five times. In 2020, he turned back a strong challenge from Alyse Galvin, a politically independent community organizer, who campaigned on discontent with the state’s economy during the coronavirus crisis.

After the election, Mr. Young announced that he had tested positive for the coronavirus. He was hospitalized for three days in Anchorage and isolated at home. He said that he regretted dismissing the seriousness of the pandemic and that he supported the use of masks, though he refused to wear one himself.

As news broke of Mr. Young’s death Friday evening, lawmakers and aides related stories about him, some noting that he had often sat in the back aisle of the House chamber and heckled his colleagues, particularly when a vote had dragged on for too long.

“His absence will leave Congress less colorful and certainly less punctual,” Representative Kevin McCarthy of California, the minority leader, said in a statement. “But his decades of service have filled every room and touched every member.”

Donald Edwin Young was born in Meridian, Calif., on June 9, 1933, the youngest of three children of James and Nora (Bucy) Young. He had two sisters, Beatty and Jane. His father was a Sutter County rancher. Donald graduated from Sutter Union High School in 1950 and earned an associate degree in education from Yuba Community College in 1952 and a bachelor’s degree in teaching from Chico State College (now University) in 1958. From 1955 to 1957, he was in the Army and served in a tank battalion.

At 26, Mr. Young moved to Alaska soon after it attained statehood in 1959. He admitted being drawn by Jack London’s 1903 novel “The Call of the Wild,” about a powerful, 140-pound dog named Buck, a St. Bernard- Scotch collie who is stolen from a ranch in the Santa Clara Valley and sold as a sled dog in the Yukon.

Mr. Young settled in Fort Yukon, a town of 700 just above the Arctic Circle. He tried fishing, trapping and panning for gold, as if resurrecting London’s Klondike wilderness life of 1897. In town, he taught elementary school classes and coached high school basketball and track teams for several years at a Bureau of Indian Affairs school, where wood- burning stoves warmed the students through freezing winter days. With the breakup of the Yukon River ice in spring, he piloted his own tug and barge, carrying supplies to villages along the river.