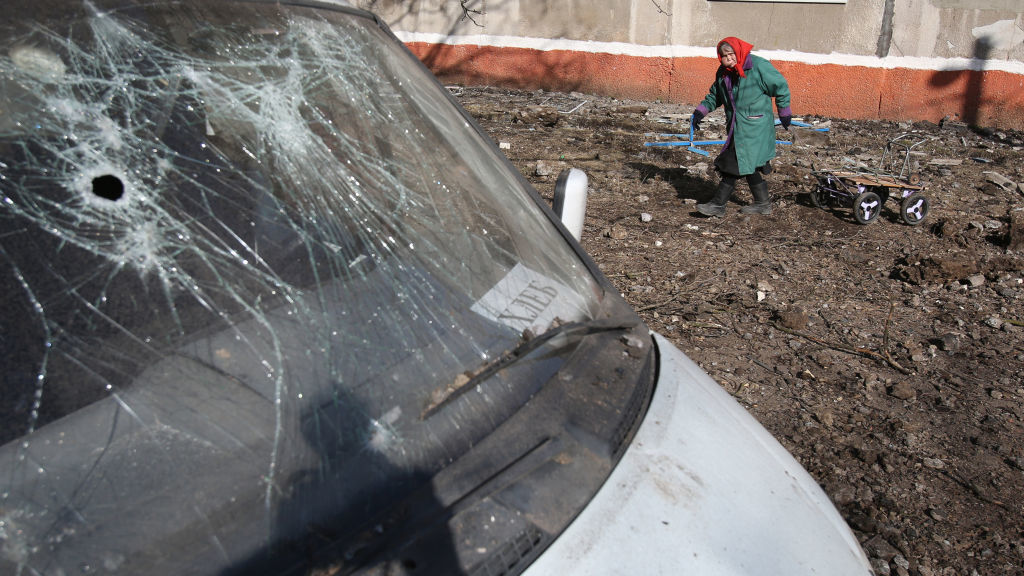 An elderly woman walks with a cart March 14 in a residential area damaged in what is said was an explosion of a ballistic missile in Kramatorsk, Ukraine, in the northern part of the Donetsk oblast.

An elderly woman walks with a cart March 14 in a residential area damaged in what is said was an explosion of a ballistic missile in Kramatorsk, Ukraine, in the northern part of the Donetsk oblast.

A senior US defense official says Russia’s top military priority at the moment is to advance in the Donbas region in the east of Ukraine, and ground efforts around the capital of Kyiv appear to be paused. Meanwhile, Ukrainian negotiators said their counterparts’ demands were becoming more acceptable.

The Russian Defense Ministry said today that Russia is focused on the Donbas, and the US official says that tracks with the heavy fighting the US has been seeing there for the past several days. The Donbas is the site of two breakaway regions, Luhansk and Donetsk, that have been contested by Ukraine and Russian-backed separatists since shortly after the 2014 annexation of Crimea.

There’s also heavy combat in Mariupol, a coastal city to the south of the Donbas. The US official says this is part of a Russian effort to take full control of the region and cut off Ukrainian forces from helping elsewhere, such as Kyiv.

The official also said that, at least for the moment, the Russians have halted their ground offensive for Kyiv.

“They’re digging in … we’re not seeing any movement on the ground,” the official said, adding that the Russians are in a “defensive crouch” about 10 miles outside the capital to the northwest, and 30-plus miles to the east. Bombardment of the capital continues, however.

Farther to the west, the senior official says the Pentagon considers the area around the southern city of Kherson contested territory again. Russian forces had captured the city on March 3.

Diplomatic efforts between the two countries are ongoing, and Ukraine says that Moscow’s negotiating positions have become more appropriate as the Russian military advance has stalled in places.

Some Western officials have expressed doubt that Russia’s negotiations are sincere, but lead Ukrainian negotiator Mykhailo Podolyak said Thursday that he believes the negotiations are “absolutely real.” But officials also said that a peace deal still may be months away.