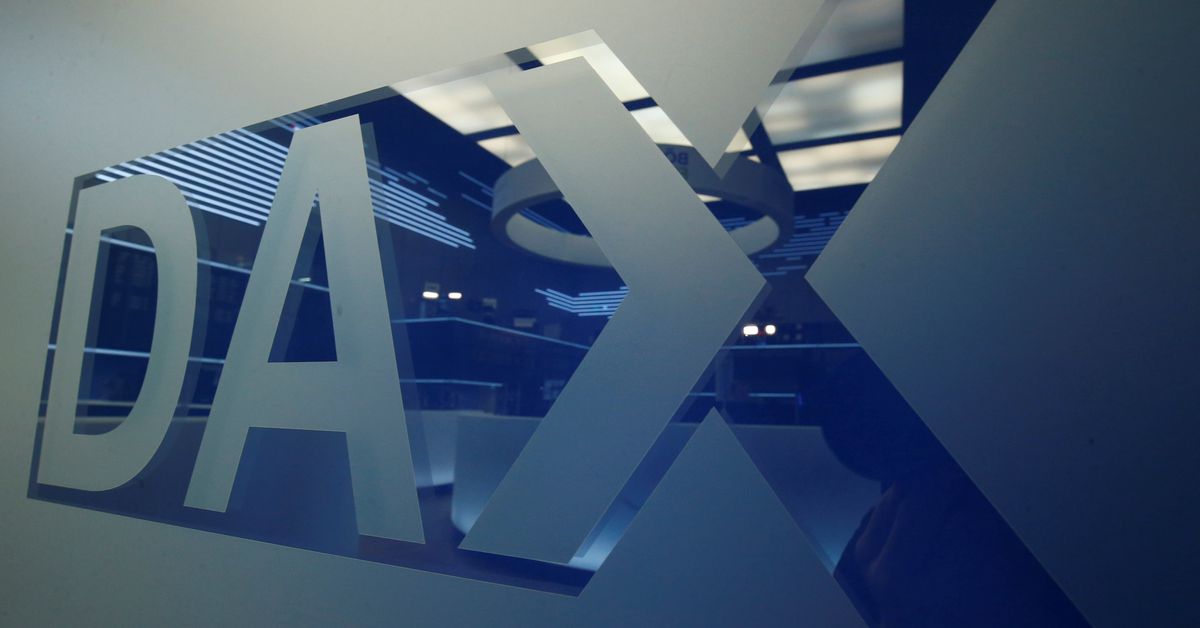 A DAX logo is pictured at the trading floor of the stock exchange in Frankfurt, Germany December 29, 2017. REUTERS/Ralph Orlowski

LONDON, March 31 (Reuters) – European stocks edged lower on Thursday and were set for their biggest quarterly drop since the start of 2020, while oil prices fell and eastern Ukraine braced for fresh attacks.

European indexes strengthened earlier in the week as investor sentiment became more positive about Ukraine peace talks. But optimism petered out after Ukrainian President Volodymyr Zelenskiy said that no quick resolution is expected and the country prepared for new Russian attacks. read more

US stock futures pointed to a slightly more upbeat Wall Street session, but the S&P 500 was still set for its first quarterly drop in two years (.SPX).

A closely-watched part of the US Treasury yield curve briefly inverted on Tuesday, which can be interpreted as an indicator that there will be a recession in one to two years’ time. read more

“There’s going to be some money coming out of equities, into fixed income, especially because equities have had quite a spectacular rebound in the last few weeks,” said Guillaume Paillat, multi-asset portfolio manager at Aviva Investors.

“The yield curve is telling us that the economy’s going to slow and effectively maybe bonds, given that they’ve sold off so much, are a bit more attractive here compared to equities,” he said, adding that he does not expect a recession and still expects markets to benefit from re-opening following COVID-19 lockdowns.

In Europe, inflation data showed record-high price rises in France in March and a 7% year-on-year rise in Italy, following sky-high readings from Germany and Spain a day earlier. read more

The sell-off in US Treasuries has paused in recent days, with the 10-year yield edging lower on Thursday to 2.3197%, compared to a three-year high of 2.557% touched on Monday .

European government bond yields were also down on the day, but still the German 10-year yield was set for its biggest monthly rise since 2009. read more

Oil prices plunged during the Asian session and extended losses in European trading hours following news on Wednesday that the United States was considering releasing up to 180 million barrels from its strategic petroleum reserve as part of a move to lower fuel prices. read more

Oil prices have surged since Russia invaded Ukraine in late February and the United States and allies responded with hefty sanctions on Russia, the second-largest exporter of crude.

The dollar was little changed against the yen, with the pair at 121.805, having stabilized after the yen fell to its lowest since 2015 on Monday on expectations that the Bank of Japan would be markedly more dovish than the Fed.

Commodity-linked currencies such as the Norwegian crown were down , .

Gold edged lower, but was still set for its biggest quarterly rise since the third quarter of 2020 . read more