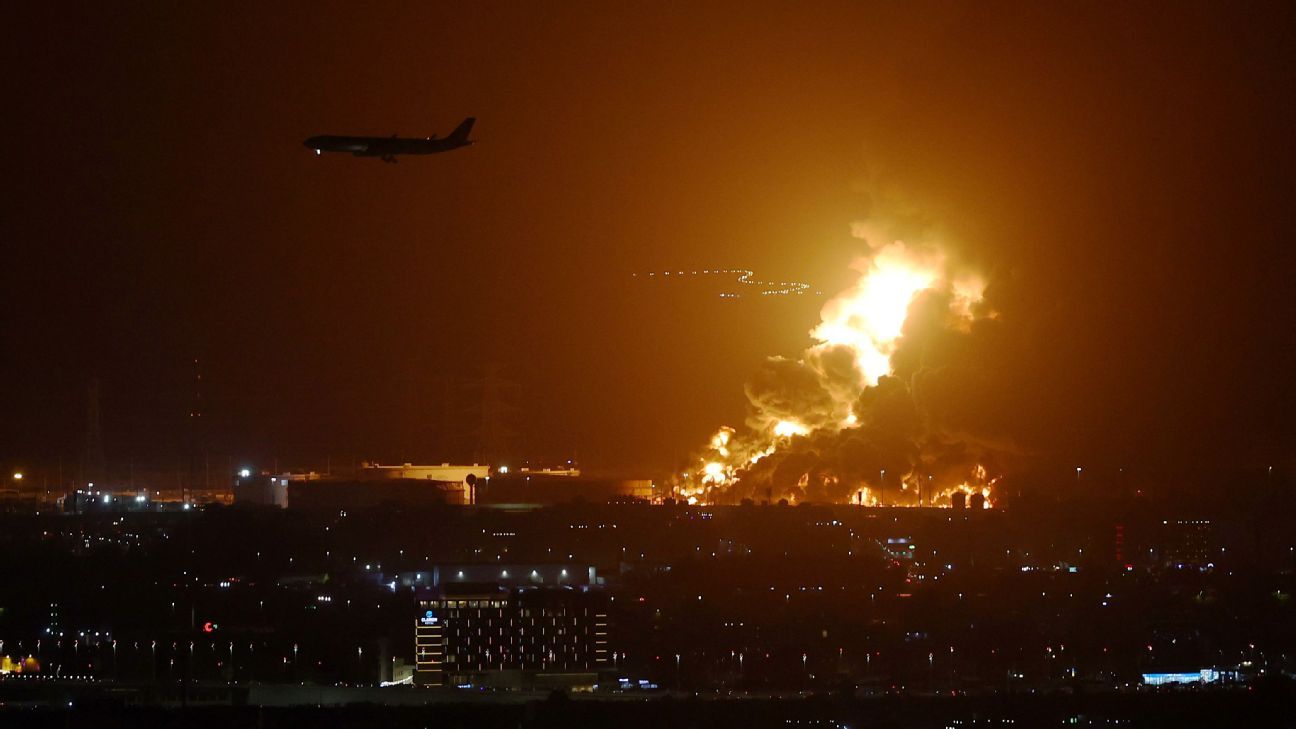 JEDDAH, Saudi Arabia — This weekend’s Saudi Arabian Grand Prix is ​​expected to go ahead as planned despite Formula One drivers raising concerns about a missile attack on a nearby oil facility Friday afternoon.

Talks between drivers, team bosses and F1 executives over the security of the event continued until 2.30 am on Saturday before team principals emerged from a meeting with F1 CEO Stefano Domenicali and confirmed the race would go ahead.

Drivers raised concerns about the safety of the event after an Aramco oil depot 10 kilometers east of the circuit was hit by a missile attack on Friday afternoon.

A military spokesperson for Yemen’s Houthis, which have been battling a coalition led by Saudi Arabia for seven years, claimed responsibility for the attack on the facility, which is owned by F1 sponsor Aramco.

The facility remained in flames Friday evening, with a large plume of black smoke visible from the track until sunset.

Saudi Arabian authorities stated there were no casualties as a result of the attacks.

A number of drivers initially raised their concerns about the situation ahead of the second practice session, leading Domenicali to hastily arrange a meeting that delayed the start of the session by 15 minutes.

F1’s CEO attempted to reassure drivers of the security of the event before all 20 returned to their cars to take part in the hour-long track session.

After practice finished, a second meeting was held with Domenicali, FIA president Mohammed Ben Sulayem, team bosses and drivers in F1’s hospitality suite at the circuit.

It lasted roughly 40 minutes before Domenicali and Ben Sulayem emerged and announced the race would go ahead following security assurances from the Saudi Arabian government, which also pays the hosting fee for the race.

“We have received total assurance that the country’s safety is first,” Domenicali told reporters after the initial meeting with drivers and team bosses. “No matter what is the situation, safety has to be guaranteed.

“They [Saudi officials] are here with their families actually here at the track. So they have in place all the systems to protect this area, the city, the places where we are going.

“So we feel confident and we have to trust the local authority in that respect. Therefore, of course we will go ahead with the event.”

“We checked the facts from them and we have the assurance from high level that this is a secure place, the whole thing will be secure and let’s go on racing.

“For sure all the families are here. We are only looking forward but with an assurance that nothing is going to happen.”

When asked if the drivers were in agreement with the decision, Domenicali added: “They will be on track”.

After Domenicali’s statement, the drivers remained in F1’s hospitality suite for a further three hours. Initially, they took part in their usual Friday briefing with FIA race director Niels Wittich but stayed on after to discuss the missile attacks and the safety of the event.

They were visited by Domenicali and F1 managing director Ross Brawn, who then left for their offices in the race control building. Team principals were summoned to Domenicali’s office around 1.30 am but stopped by at the drivers’ hospitality suite amid growing speculation of a boycott.

After over four hours in total, the drivers left their room, with Mercedes’ George Russell, who is the director of the Grand Prix Drivers Association, joining the meeting between Domenicali and the team bosses in the race control building.

Shortly after entering the building, Russell and the team principals returned to the paddock where several team bosses confirmed to media that the race would go ahead.

Speaking earlier in the day, Red Bull boss Christian Horner said he agreed with the decision to race on.

“I think the sport has to stand together collectively,” Horner said. “Any act of terrorism cannot be condoned. The sport shouldn’t be bullied into a position that a situation like that just isn’t acceptable.

“Stefano and the president, they’re dealing with it. There’s been all the assurances from the organizers and we’ll be going racing.”

Mercedes boss Toto Wolff added: “[The F1 circuit] is probably the safest place that you can be in Saudi Arabia at the moment.”

The promoter of the race, the Saudi Motorsport Company (SMC), confirmed the attack and said security had been raised to match the threat posed by the events

“We are aware of the attack on the Aramco distribution station in Jeddah earlier this afternoon,” the SMC statement said.

“The race organizers remain in direct contact with the Saudi security authorities, as well as F1 and the FIA ​​to ensure all necessary security and safety measures continue to be implemented to guarantee the safety of all visitors to the Formula One stc Saudi Arabian Grand Prix as well as all drivers, teams and stakeholders.

“The race weekend schedule will continue as planned. The safety and security of all our guests continues to be our main priority and we look forward to welcoming fans for a weekend of premium racing and entertainment.”