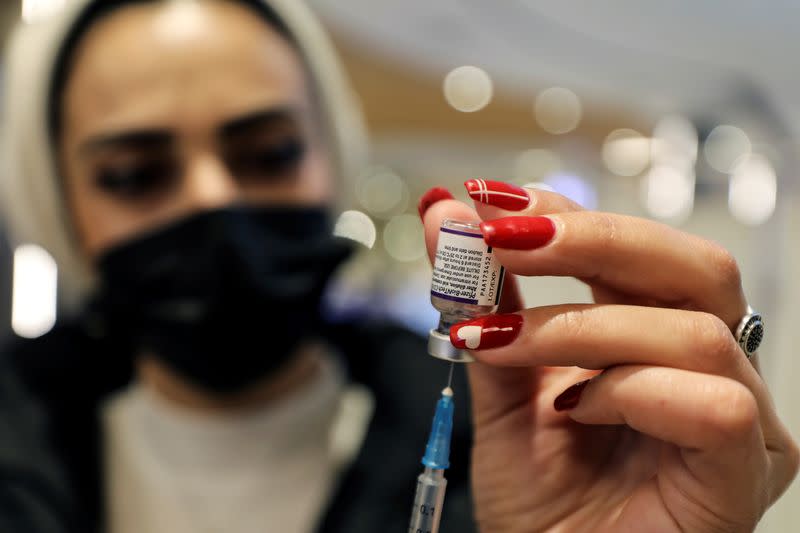 (Reuters) – The following is a summary of some recent studies on COVID-19. They include research that warrants further study to corroborate the findings and that has yet to be certified by peer review.

Fourth vaccine dose protects vs Omicron for at least a month

A fourth dose of the COVID-19 vaccine from Pfizer and BioNTech provided significant added protection against severe disease, hospitalization and death for at least a month in older individuals, according to a study from Israel conducted when the Omicron variant was dominant.

The estimated effectiveness of the fourth dose during days 7 to 30 after it was administered compared with a third dose given at least fourth months earlier was 45% against infection, 55% for symptomatic disease, 68% for hospitalization, 62% for severe disease and 74% for death, the research team reported on Wednesday in The New England Journal of Medicine. The study compared 182,122 individuals aged 60 and older who received a fourth dose and 182,122 very similar people who had received a third dose but not a fourth.

“The results of our real-world study suggest that a fourth vaccine dose is, at least initially, effective against the Omicron variant,” the researchers said. “Additional follow-up will allow further assessment of the protection provided by the fourth dose over time.” A recently published larger Israeli study that looked only at rates of breakthrough infections and serious illness after the fourth dose found that efficacy waned quickly versus infection but held steady versus severe illness.

Patients with COVID-19 may have an increased risk of rare vision-threatening blood clots in the eye for months afterward, new findings suggest.

Because SARS-CoV-2 infections increase the risk of blood vessel obstructions at other sites in the body, researchers studied nearly half a million COVID-19 patients to see whether they would develop clots in the veins or arteries of the retina, the nerve tissue at the back of the eye that receives images and sends them to the brain. Over the next six months, 65 patients had a retinal vein occlusion. While that number is low, it reflects a statistically significant 54% increase compared with pre-COVID infection rates, according to a report published on Thursday in JAMA Ophthalmology. Retinal artery clots were 35% more common after COVID-19 than before, but that difference might have been due to luck. The clots most often occurred in patients with other conditions that increased their risk of blood vessel problems, such as diabetes, high blood pressure, and high cholesterol.

Clot risk did not appear to be associated with the severity of the coronavirus infection. The study cannot prove that COVID-19 caused the clots in these patients’ eyes, the researchers noted, saying larger studies of the issue are needed.

Researchers in California tracked more than a quarter of a million fully vaccinated patients in the US Veterans Affairs health system. Nearly all were men, and roughly half had received at least one psychiatric diagnosis in the past five years. Overall, 14.8% developed COVID infections despite vaccination. Compared to study participants without a psychiatric diagnosis, those over age 65 with substance abuse, psychotic disorders, bipolar disorder, adjustment disorder or anxiety faced up to a 24% higher risk of breakthrough infections, the study found. For those under 65, risks were up to 11% higher than for those without a psychiatric history, the researchers reported on Thursday in JAMA Network Open.

“Our research suggests that increased infections in people with psychiatric disorders cannot be entirely explained by socio-demographic factors or pre-existing conditions,” said study leader Aoife O’Donovan of the San Francisco VA Health Care System. “It’s possible that immunity following vaccination wanes more quickly or more strongly for people with psychiatric disorders and/or they could have less protection to newer variants.”

For a Reuters graphic on vaccines in development, click: https://graphics.reuters.com/HEALTH-CORONAVIRUS/VACCINE-TRACKER/xegpbqnlovq/