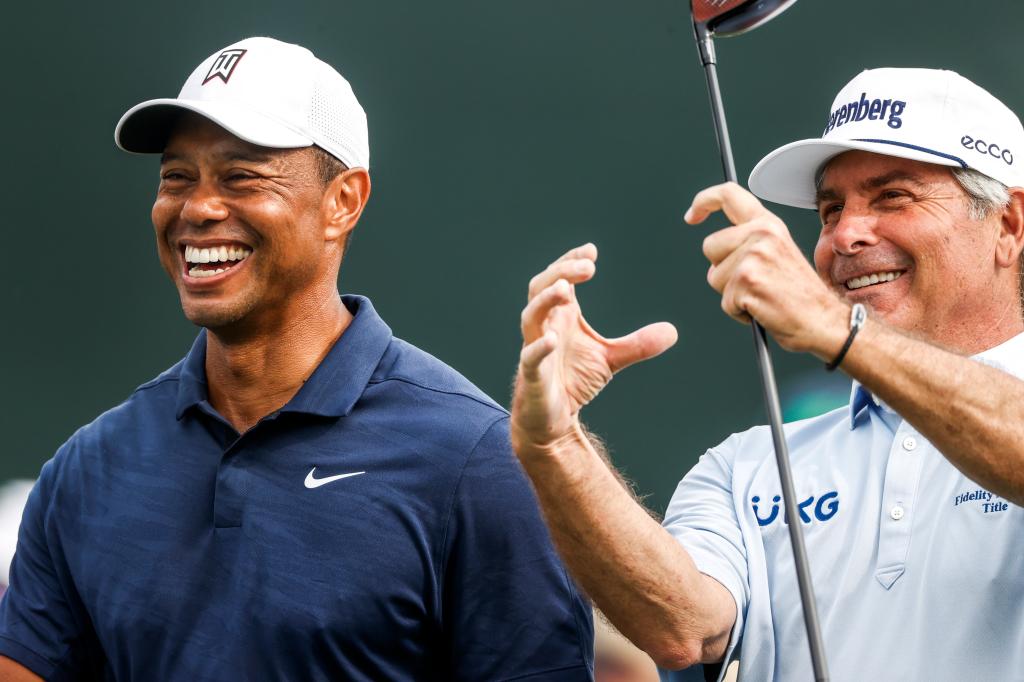 AUGUSTA, Ga. — Up close and personal, Fred Couples watched Tiger Woods practice for nine holes Monday and came away believing that Woods can win the Masters.

I repeat: A 62-year-old veteran celebrating the 30th anniversary of his own Augusta National triumph — with Tiger’s current caddy, Joe LaCava, on his bag — spent the better part of three hours in Woods’ company and concluded that a man whose right leg was nearly amputated not even 14 months ago can win his sixth green jacket Sunday.

As something of a disclaimer, it’s worth nothing that Freddie is a dear friend of Tiger’s. They exchange text messages nearly every day, with Couples teasing him about this and that, and with Tiger delivering updates on his son’s new clubs, and his daughter’s soccer games and knockout Hall of Fame speech.

“Then all of a sudden he said, ‘I’m going to Augusta,’ ” Couples reported.

And go to Augusta Mr. Woods did.

He played a practice round with his son, Charlie, and Justin Thomas last week, and played the back nine Sunday, catching up to a 27-year-old Australian and Masters rookie Cameron Davis, who took the opportunity to pick Tiger’s brain about the race. Davis thought Woods looked “pretty solid” but added that he was walking “a little slow going up a couple of hills on 17 and 18.”

But to veteran Tiger watchers aware of his early wake-up calls and impulsive ways, it seemed a good idea to show up on the first tee at 7 am Monday, before the darkness surrendered to dawn, just in case.

A gallery guard in a white jumpsuit working his 27th Masters named Vic Mixon was all alone on the tee box as the sun started to rise. He’d been working at No. 1 for 15 years and recalled that Woods hit the worst opening drive he’d ever seen, a snap-hook that sailed over the trees, across the ninth hole and through another set of trees before stopping short of the eighth fairway. Tiger made by from there. Of course he did.

LaCava, Woods’ caddy, was out studying the course with Thomas’ caddie, Jim “Bones” Mackay, and confirmed that his man would play in the afternoon and that he was looking good. Sure enough Woods landed on the practice range after lunchtime, chipping, hitting balls out of bunkers, and working his driver.

At 2:34 pm, Woods wore a devilish smirk as security guards cleared a path for him from the clubhouse to the putting green, which was suddenly surrounded by fans six or seven deep. At 2:36, defending champ Hideki Matsuyama walked by that green without being noticed by a single one of those fans.

At 2:41, Woods made his way to the first tee to a thunderous roar, joining Couples and Thomas. Only Tiger could turn a Monday dress rehearsal into something that felt like Sunday’s main event. At 2:46, he lashed his opening drive into the fairway, to another thunderous roar. As Woods walked uphill toward his ball, he leaned forward and moved like a 46-year-old man dealing with a stiff back and a sore foot. His gaiety seemed uneven, and he appeared to limp into and out of his stances.

As he fixed a ball mark on the sixth green, Woods bent over and put all his weight on his severely damaged right leg — perhaps a good sign. Another good sign — He pounded his drive on the par-5 eighth like the Tiger of old, not the old Tiger.

“He was bombing it,” Couples said. “I know JT is not the longest hitter on the tour, but I know he’s damn long. [Tiger] was with him flushing it.”

Twenty-five years after Woods’ first Masters victory, it was a pretty remarkable thing to see.

“He looked phenomenal,” Couples said, despite those unforgiving Augusta National hills that make the course, in Freddie’s words, “brutal to walk.”

On good days, Woods can still hit it with the best of them, and there is no question about that. But even though he won a US Open over 91 holes 14 years ago while playing through stress fractures and a torn ACL in his left leg, wouldn’t it be a staggering thing to watch Woods walk 72 holes on a right leg mangled in his horrific car wreck a little over a year ago?

“It’s not shocking because he’s the greatest player to ever play,” Couples said. “You give him a couple minutes, you give him a couple good legs and he swings like this. … But now comes the walking part of it, and I’m not a guy that’s going to guesstimate on that. I watched it today, he looked phenomenal.”

And let’s face it: When Tiger Woods looks phenomenal at Augusta National, even on one leg, something memorable is bound to go down.