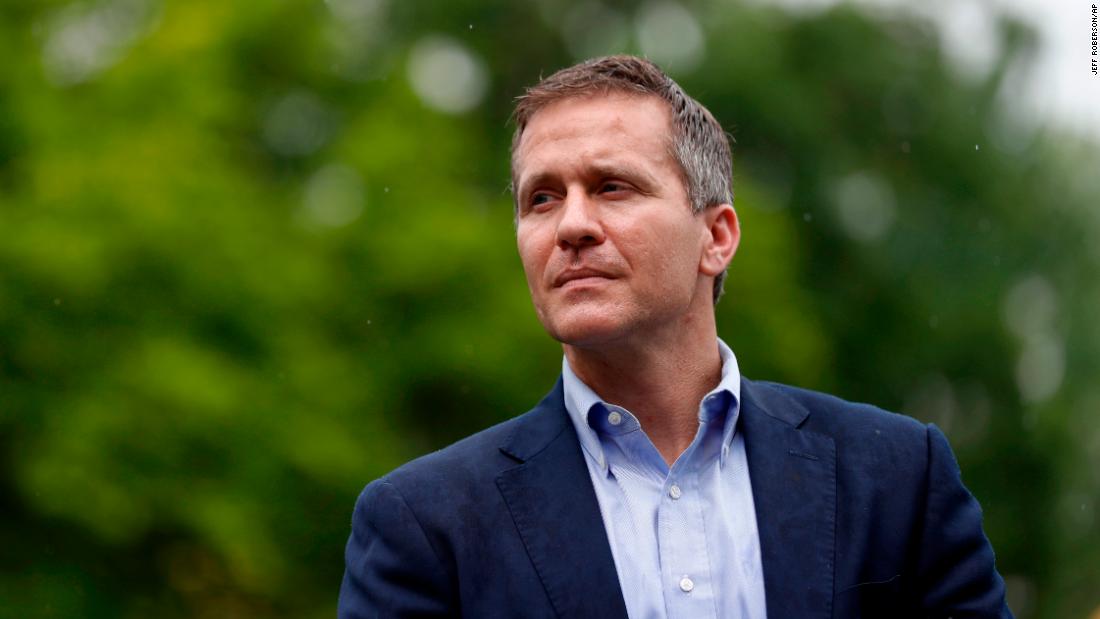 In a document filed in Boone County Circuit Court on March 31, Sheena Greitens says allegations of her ex-husband’s abuse were reported to “multiple lawyers, therapists, and our mediator, in 2018 and afterward.”

“I will provide contemporary documentation of the relevant communications, as well as photographic evidence of my child’s 2019 injuries, to the court at the appropriate time,” Sheena Greitens said.

“Here’s the thing, we were kind of hoping that she would have realized she made a mistake,” said Timothy Parlatore, attorney for Eric Greitens. “This seems to indicate that she’s really just going to double down.”

Parlatore said Sheena Greitens was lying in her filings and maintained — without providing evidence — that she was working with GOP political operatives to take down her ex-husband’s campaign.

Greitens and his attorneys have cast Sheena Greitens’ claims of abuse as part of an effort to undercut his Senate bid by leading Republicans.

Sheena Greitens said in the court filing that “none of these claims are true,” and that she “did not discuss the contents of my affidavit with anyone other than my counsel until after it was to be initially filed” on March 16.

“When his political future is at risk, he becomes erratic, unhinged, coercive, and threatening,” Sheena Greitens says of her ex-husband in the affidavit. “He accuses me of things that are untrue and generates conspiracy theories about me collaborating with his ‘enemies,’ when I have done no such thing.”

Parlatore, Greiten’s attorney, said his client has emails from the time period that will show the injuries on the Greitens’ son came from “roughhousing with his brother.”

“This whole thing is just more doubling down on the same lies,” Parlatore said.

The former couple is battling over custody of their two children. Sheena Greitens has sought to move the custody case from Missouri to Texas, where she now lives and works as a university professor.

The filings come ahead of a May hearing in the case. In her most recent filing, Sheena Greitens says she has refused to comment to reporters about the case and has restricted her comments to the court room — but “it will be difficult to do so” if questions about where the case should be decided are not resolved until May 27, “because I expect I will have to go through two months of untrue public attacks on my character, motherhood, and professionalism.”

Greitens’ stunning fall from power in 2018 came as he faced calls for impeachment from the GOP-controlled state legislature and a criminal charge — invasion of privacy — related to a 2015 affair, in which his former hairdresser alleged he tied her up, coerced her into oral sex and threatened to blackmail her with partially nude photos to cover up their affair.

Greitens admitted to the affair but refuted the blackmail claim. He was separately charged with another felony — tampering with computer data — for allegedly misusing a veterans charity’s donor list for his 2016 gubernatorial campaign.

The criminal charges against Greitens were dropped. A former FBI agent investigating the blackmail allegations was later indicted for perjury and tampering with physical evidence. When a Missouri ethics panel investigated Greitens’ campaign misconduct, it found no evidence of wrongdoing but ended the campaign for failing to report in-kind contributions.

Sheena Greitens said in her affidavit filed in March that Eric Greitens admitted to her that he took the photo that resulted in the invasion of privacy charge, but “he threatened that I would be exposed to legal jeopardy if I ever disclosed that fact to anyone. ”

She also alleged that in the spring and summer of 2018, “Eric repeatedly threatened to kill himself unless I provided specific public support to him.”

Earlier this year, the former governor told CNN that he did “absolutely” nothing wrong with his former hairdresser and claimed that he resigned for his two children.

“It was the thing that I had to do for the people who I love the most, particularly for my boys, given those tremendous lies and the tremendous pressure that was on my kids,” he said.

But Sheena Greitens pushed back on that explanation in her March 16 short filing, saying their young children were “unaware of the scandal, and I would like them to remain so until they are older.”

She added, “I have privately entered Eric to stop introducing false and misleading information about our marriage and divorce into the public in his quest for political office,” according to her court filing.

In the March affidavit filed in the Circuit Court of Boone County in Missouri as part of her effort to have a custody case moved to Texas, Sheena Greitens said she grew so afraid of her former husband that she sought to limit his access to weapons and began sleeping in her children’s room out of concern for their safety.

“In early June 2018, I became afraid for my safety and that of our children at our home, which was fairly isolated, due to Eric’s unstable and coercive behavior,” she said. “This behavior included physical violence toward our children, such as cuffing our then three-year-old son across the face at the dinner table in front of me and yanking him around by his hair.”

Sheena Greitens said she and others were so concerned about Eric Greitens’ behavior that they limited his access to firearms on three occasions. She said she was concerned about the “escalation of physical violence” and eventually, “I started sleeping in my children’s room simply to try to keep them safe,” according to her affidavit.

In a statement, Eric Greitens denied the allegations.

“Being a father is the joy of my life and my single most important responsibility,” he said. “I will continue to love and care for my beautiful sons with all of my being, and that includes fighting for the truth and against completely fabricated, baseless allegations.”

His attorney asked the judge to seal the custody case.

In her affidavit, Sheena Greitens laid out a series of allegations of verbal threats and physical abuse against both her and their children. She detailed how Eric Greitens allegedly threatened to use his political ties to tarnish his ex-wife’s reputation.

In one instance, she claimed Eric Greitens had “knocked me down and confiscated my cell phone, wallet, and keys so that I was unable to call for help or extricate myself and our children,” according to the court filing.

In another 2019 incident, one of the children returned from a visit with Eric Greitens with a swollen face, bleeding gums and a loose tooth, according to her court filing. “He said Dad had hit him; however, Eric said they were roughhousing and it had been an accident,” Sheena Greitens said in her affidavit.

At one point, Sheena Greitens said she tried to flee with the children.

“When I told Eric about my plans, he threatened to come to the airport and have me arrested for kidnapping and child abuse, saying that because of his authority as a former Governor who had supported law enforcement, the police would support him and not believe me, and I would lose our children,” Sheena Greitens said, according to the affidavit.

Sheena and Eric Greitens divorced in 2020.

Greitens’ campaign manager Dylan Johnson said, “His ex-wife is engaged in a last-ditch attempt to vindictively destroy her ex-husband. Though she knows that the press will viciously repeat her false allegations, Eric has always been a great Dad, who loves his boys and has always put them first, and that is why he is filing for full custody of his children.”

In a statement, Sheena Greitens stood by her sworn affidavit and said she would provide evidence and documentation if the court requests it.

“My only interest is what’s best for my two children, and for the last four years, I have gone to great lengths to keep these family matters private to protect them,” she said in her statement. “I am not interested in litigating this matter anywhere other than the courtroom.”