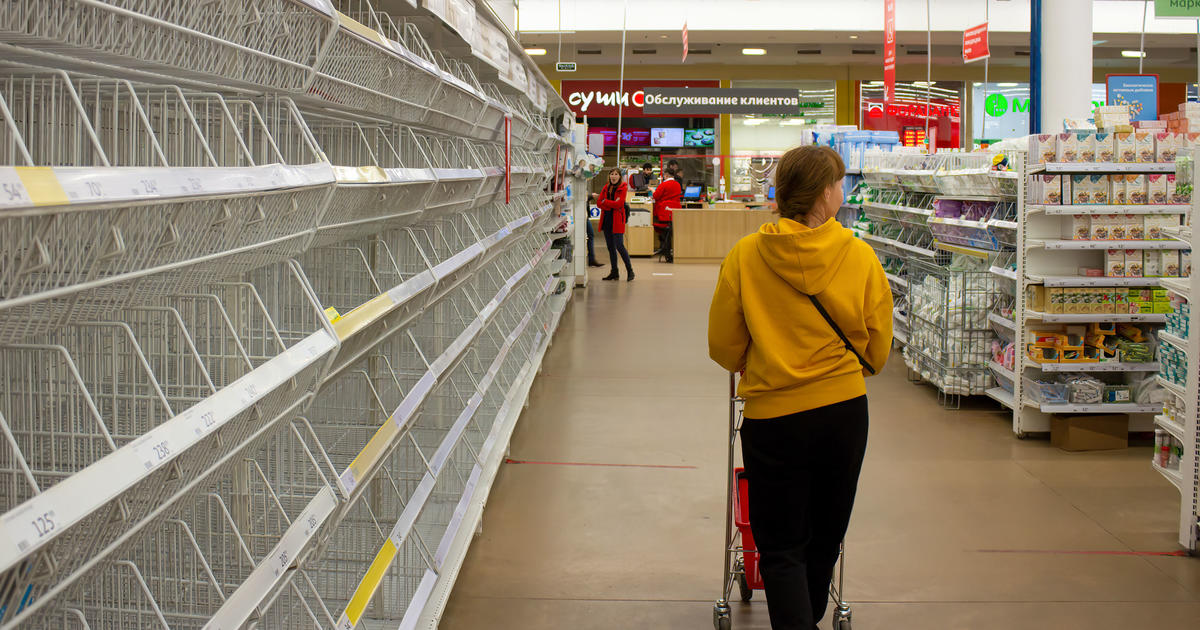 A month into the most severe and coordinated sanctions by Western governments, Russia’s economy is showing signs of cracking.

With the ruble seeingsawing in value against the dollar and many educated Russians reportedly fleeing the nation, Russia’s economy is facing a contraction unlike any it’s ever seen before. “The current crisis will wipe out 15 years of economic development,” the Institute of International Finance said in a report.

The IIF estimates Russia’s gross domestic product will shrink 15% this year and 3% next year. Goldman Sachs predicted a smaller but still significant contraction of 10% in 2022.

“Russia has not had a recession of this size since the 1990s,” said Elina Ribakova, the IIF’s deputy chief economist. “This is an unprecedented shock to the Russian economy.”

As Western nations prepare for a further round of sanctions after reports of war crimes in towns around Kyiv, here is how the shock is already affecting Russian stores and factories.

With heavy-equipment and carmakers closing their operations in Russia, the nation’s manufacturing output in March dropped at the fastest rate since COVID-19 first spread two years ago. The S&P Global Purchasing Managers’ Index noted longer delivery times, “severe materials shortages” and prices for producers as well as consumers “soaring” at record rates.

The index, which measures manufacturing activity, fell to 44.1 in March, signaling “the sharpest decline in operating conditions across the Russian manufacturing sector for almost two years,” S&P Global said Friday. (A reading below 50 indicates a contraction; a reading above 50, growth.)

Amid a drop in orders from domestic and foreign clients, “firms continued cutting jobs, with employment falling at the joint-fastest pace in almost two years,” S&P Global said.

Russian supermarkets are short of essential items including diapers, sanitary pads and sugar. Images of empty store shelves are circulating the internet, with some people making comparisons to North Korea, according to UK newspapers.

Russians started panic-buying sugar about two weeks after the invasion, leading to empty shelves and the imposition of purchase limits on groceries by stores, the Russian newspaper Kommersant reported. The rush on products has prompted the Russian government to issue public pronouncements against panic-buying.

Russia has already banned exports of sugar, wheat, rye, barley and corn through the summer to protect the domestic food supply, Reuters reported.

While some Western nations struggle with inflation between 5% an 8% this year, consumer prices in Russia are expected to rise by a staggering 20% ​​this year, according to Capital Economics.

Some big-ticket electronics as well as cars are rising in price even faster, as wealthy Russians try to buy goods with their rubles rather than risk the currency’s losing value, according to reports from Insider and the Daily Mail.

The cost of a new TV, for instance, has tripled from January to March, the Daily Mail reported, with a television now costing two-thirds of a typical monthly salary.

One stock trader in Moscow told Insider he bought a new iPhone 13, a Samsung tablet and new tires for his family’s BMW. An investment banker told the outlet, “We have all these rubles, and I would rather buy something now than watch them become completely worthless.”

After plummeting last month to the value of one US cent, the ruble has lately recovered much of its value, thanks to severe capital controls imposed by President Vladimir Putin, which limit how much Russians can withdraw from banks and forbid the exchange of rubles for foreign currency.

Still, the effects of sanctions on Russia are already being seen with consumer spending in the country dropping, the IIF noted.

Some banks cut off

Financial sanctions have hit the banks unevenly. About seven major banks have been disconnected from SWIFT, the system that allows banks to communicate with each other, but about three-quarters of Russia’s banks remain connected, according to the IIF.

Sberbank, the largest bank in the region, can continue most of its operations, but cannot engage with banks in the US and is blocked from long-term borrowing, Ribakova noted.

“It’s the most important common bank,” with most retired Russians collecting their pensions through Sberbank, Ribakova said. “That’s maybe the reason the US decided not to go against it too aggressively.”

Russian fossil fuel exports, which makes up 40% of Russia’s budget, could be on the chopping block as Western nations call for a response to atrocities around Kyiv. The European Union on Tuesday banned Russian coal imports and some European nations are calling for bans on Russian oil and gas.

A total ban on Russian fuels would cost the country $250 billion to $300 billion in export losses, according to IIF.

Russian oil is already having a hard time finding buyers after a ban by the US and UK last month. “[O]he traders have substantial reluctance to acquire Russian oil. Anecdotally, even shipments at a heavily discounted price ($35/bbl below Brent) have not found buyers at times,” the IIF wrote in a report.

Are the sanctions effective?

While ordinary Russians are suffering from the lack of products and rising costs, it’s not clear whether sanctions will have an impact on the political class or Putin’s desire to wage war in Ukraine.

Brian Grodsky, political science professor at University of Maryland Baltimore County, pointed out that sanctions against autocratic governments rarely work, because elites can often evade sanctions by siphoning resources for their own benefit. Meanwhile, the people bearing the brunt of the economic fallout have little sway with their government, with Russian protesters or those who simply discuss the war facing severe punishment, such as long prison terms.

“It will bleed the country dry, but we’ve seen authoritarian rulers continue to bleed their people,” Grodsky said of Western sanctions. “Regimes like this will squeeze from everywhere if it means security. If it means not cleaning the streets, not filling the potholes, they’ll do that.” Grodsky also noted that sanctions could potentially backfire if they drive a lot of anti-Western sentiment in the country.

But with Russia so dependent on foreign imports, sanctions will make it harder to finance the war in Ukraine, the IIF’s Ribakova said.

“Even for domestic military production, [Russia] connected on imports from abroad. A weaker ruble makes it more difficult, and direct export controls make it more difficult. There will be a lot of value chains within Russia that break down,” she said.

She added: “The issue here is Russia’s ability to finance the war — the more effective sanctions also make it harder for Russia to finance the war and more costly for the Russian economy. Whether they decide to prioritize the war over their own citizens, remains to be seen.”