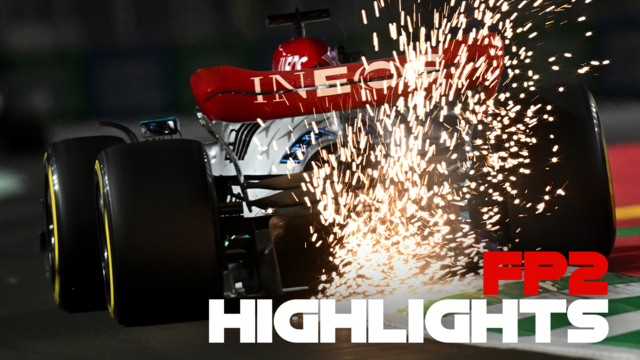 Watch the highlights from second practice at the 2022 Saudi Arabian Grand Prix – which, as in FP1, saw Charles Leclerc set the fastest time before his session ended early as he touched the wall.

In much more representative conditions to what will be seen in qualifying and in the race, Leclerc set the fastest time of the session on the soft compound tire with a time of 1m 30.074s, which again saw him lead rival Max Verstappen by just over a tenth.

Carlos Sainz was a further two-tenths back in third place, just ahead of Red Bull driver Sergio Perez in fourth. Behind them were Mercedes duo Lewis Hamilton and George Russell, who set the fifth and sixth-fastest times of the session, respectively.

Yuki Tsunoda – who finished 10th – stopped on track in the final few seconds, causing the session to end under yellow flags

Earlier, the Virtual Safety Car was enabled as Kevin Magnussen pulled over to the side of the road as he seemed to suffer a recurrence of the hydraulic issue that kept him out of FP1.

Watch how the second practice session unfolded at Jeddah by tapping play in the video player above.

F1 TV Pro gives fans a front row seat, with information and camera views usually only found on the pit wall. Sign up today for a free 7-day trial* to experience F1 2022 to full redline-hitting effect.