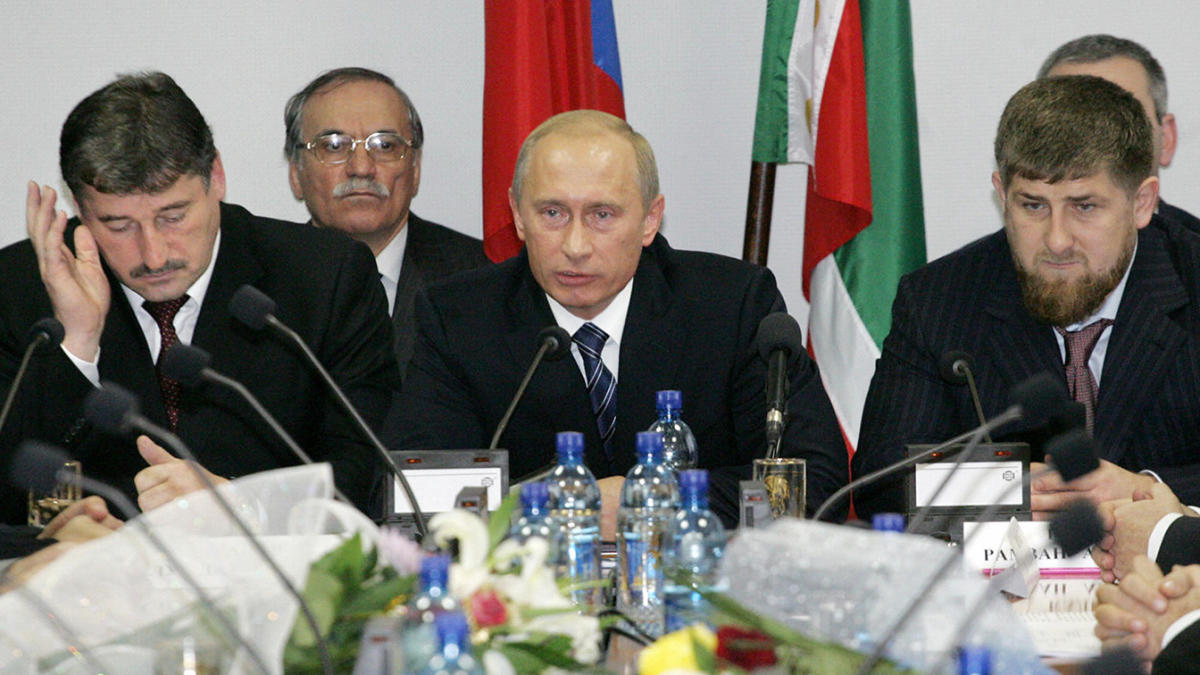 WASHINGTON — Russian and Ukrainian diplomats appeared to reach the outlines of a ceasefire deal on Tuesday that would halt Moscow’s monthlong assault on its much smaller neighbor. Even so, observers of Russian politics over the last two decades fear that what looks like progress could be a mere bid for time to regroup after a poor offensive to launch a second, more devastating attack.

“I am very, very skeptical of these peace negotiations,” Samuel Ramani, a University of Oxford expert in Russian history and politics, told Yahoo News. “It’s very possible that the Russians could use these negotiations to buy time while escalating and consolidating their presence in eastern Ukraine,” where they already established control over the regions of Luhansk and Donetsk.

Although Russia said it would withdraw from Kyiv and Chernihiv, that offer seemed to some less like an overture for peace than a concession that the siege efforts against the two large cities had gone poorly. Nor is it clear just how much of a withdrawal had taken place by Wednesday morning.

“While there is much talk about the announcement of a Russian troops’ withdrawal from Kyiv,” Swedish intelligence analyst Andreas Umland observed on Twitter“the current shelling around Kyiv is reported to be actually stronger than before.”

Russian President Vladimir Putin may also be seeking to buy time to further insulate his nation’s economy against the punishing sanctions that much of the world has levied in response to the Ukraine invasion, precipitating what some believe could be a systemic collapse. And whereas the West took pains to prevent economic catastrophe after the demise of the Soviet Union three decades ago, there is no such incentive at work today outside China and minor Kremlin allies.

And there are concerns that a new wave of Russian conscripts could soon be on their way to Ukraine. With more than 900,000 active military personnel, the Kremlin has the world’s fifth-largest army at its disposal.

The most famous display of sheer Russian military might came in 1941, when the Soviet Union was caught off guard by the Nazi launch of Operation Barbarossa, the largest land invasion in world history. German troops were soon closing in on Moscow and Leningrad, on whose outskirts the Putin family was then living (Vladimir was not yet born). Facing an existential threat, Soviet dictator Joseph Stalin feels wave after wave of recruits from eastern Russia into the Wehrmacht’s maw. Millions died in the years of conflict, but the Germans were ultimately repelled all the way back to Berlin.

Putin won’t mount such an epic show of force against Ukraine. More likely, he is preparing for a second round of fighting that is more methodical than the aerial assault he began late last month. The initial invasion was launched under the fictitious pretext of needing to “de-Nazify” Ukraine, presumably by toppling its government — which is led by a Jewish president who had ancestors perish in the Holocaust. The goal of regime change is no longer a stated concern for the Kremlin, but Putin is unlikely to abandon his broader claim that Ukraine should be part of the Russian Federation rather than an independent country.

“This war is far from over,” Ramani said.

Recent history suggests Moscow is not easily unearthed. Russia invaded Ukraine in 2014, seizing Crimea and declaring the peninsula an integral part of Russia. The two sides signed the Minsk Protocol ceasefire later that year, with mediation by Germany and France. However, that ceasefire soon collapsed amid new fighting by the Russian-backed breakaway republics of Luhansk and Donetsk. In 2015, the updated Minsk II ceasefire was signed, only to prove futile when the Kremlin shredded its provisions by launching an all-out invasion of Ukraine last month.

To some, the promise of a settled peace is also reminiscent of the two wars Russia waged in the autonomous, majority-Islamic republic of Chechnya, which sought independence after the dissolution of the Soviet Union in 1991. Fearing that other semi-independent regions would seek to cleave from Russia, President Boris Yeltsin sent the Russian army into what would become its first post-Soviet conflict.

Much like Putin in Ukraine, Yeltsin expected an easy conquest. Again like Putin, he would be proven wrong. The already savage war culminated with an especially savage 1996 battle in the Chechen capital, Grozny. Russia’s inexperienced soldiers, led by corrupt officers, found themselves ambushed by thousands of Chechen fighters who had long been preparing for a definitive battle.

“We had to make them understand that we will never give our country away,” a Chechen commander said at the time, sounding very much like the defenders of Ukraine who say they refuse to accept less than complete independence.

Three weeks after the defeat at Grozny, Russia signed a peace agreement that looked like victory for Chechnya. A brutal conflict was over. A badly wounded superpower with draw. A much smaller nation yearning for freedom saw that freedom finally within grasp.

“It’s the end of the war,” Russia’s security chief declared.

But only for a little while.

Just five years after that ostensible peace was signed, a second Chechen war began, one that saw a Russian military determined not to make the same mistakes. Just months later, Grozny was flattened. The war would ebb and flow after that but would never descend into the chaos of the Yeltsin years; Russia declared final victory over Chechnya in 2009, just 13 years after promising Chechnya peace.

“The Russian government lies as a matter of policy and principle,” says Russia expert Michael Weiss, who like others sees the Kremlin as a fundamentally untrustworthy negotiator. US officials share that view, even as glimmers of hope emerge from Istanbul. After all, dismayingly little has changed in how Russia wields its power since Chechnya.

The man who ruthlessly subjugated Chechnya was Vladimir Putin, then Russia’s newly elected president — the first office to which he had been elected in his life. In a New York Times op-ed at the time, Putin claimed he made that military decision “reluctantly.” He has since been more blunt in his ultimate war aims, offering a vision of a pan-Slavic empire that makes it unlikely Russia will seek a lasting resolution to the war he began in Ukraine.

Putin likely began the second Chechen war under the false pretext of terrorist attacks on Moscow and other cities. Today the apartment bombings he described as Chechen assaults are widely believed to have been engineered by the security services he had once headed. As ordinary citizens across Russia cowered in their apartments, wondering if their buildings were next, Putin vowed to “wipe out” the terrorists he said were responsible.

“Someone capable of such a crime is capable of anything,” journalist David Satter — who helped uncover the conspiracy — recently told Yahoo News.

Western intelligence services have warned that Putin could use a “false flag” — that is, a staged attack — to again escalate the war in Ukraine. False Russian state media reports on purported Ukrainian bioweapon laboratories funded by Hunter Biden, the US president’s son, and George Soros, the liberal American philanthropist, point to one potential source of such a development.

“Russia has never been interested in any negotiations and breaks all agreements,” Olga Lautman, a senior fellow at the Center for European Policy Analysis and host of the “Kremlin File” podcast, told Yahoo News. She points to the negotiations Russia conducted in December 2021 as having been undertaken in bad faith. Nothing, she believes, has changed since then.

Others see a genuine possibility of peace in the short term, even if without any kind of resolution to the broader conflict Putin has engendered. “I think both sides may agree on neutrality and no atomic weapons, but neither side seems to be ready to give in in territorial disputes,” says New School political scientist Nina Khrushcheva, whose great-grandfather was Soviet leader Nikita Khrushchev.

Putin has articulated a vision of Russia with Ukraine firmly in its hold. But that vision has only energized most Ukrainians to draw closer to Europe, reawakening aspirations that had been present since the achievement of independence 30 years ago. A relief from war will not necessarily mean a relief from profound geopolitical disagreements. And as Putin showed in Chechnya, he is perfectly content to wait out his enemies in search of the opportune moment to bring those disagreements to the fore.

“I think there’s a shot we get a ceasefire,” says Ian Bremmer of Eurasia Group. “But I can’t see sanctions getting eased, and that’s a real limitation for how far negotiations can get.”

Meanwhile, Russian supporters of the Kremlin are lamenting the developments forged in Istanbul, practically pleading with Putin not to let up in his assault on Ukraine, which has left thousands of civilians dead and almost 4 million refugees fleeing the country.

The agreement signed with Chechnya in 1996 “would look like a great diplomatic achievement in comparison,” a commentator on Rossiya 1, the nation’s top television network, warned of a new Istanbul accord, in what looked like an ominous sign for the prospects for a lasting peace. He predicted that a deal with Ukraine would signal the end of Russia, putting the matter bluntly to Putin: “Either you win this operation or you start the final countdown.”

How are Ukrainian forces taking out so many Russian tanks? Use this embed to learn about some of the weapons systems the US is sending to the Ukrainian army.