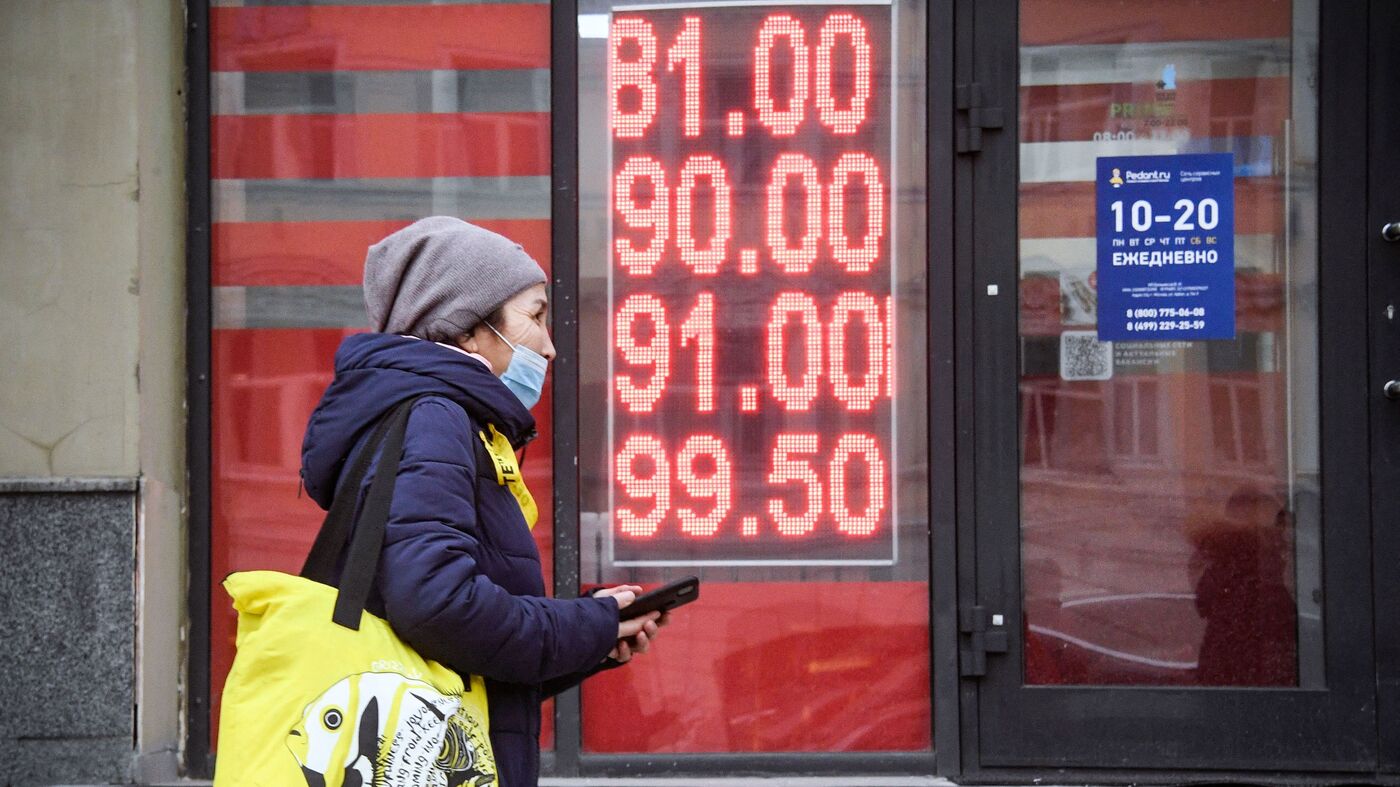 A woman walks past a currency exchange office in central Moscow on February 24, 2022.

A woman walks past a currency exchange office in central Moscow on February 24, 2022.

Russia said last week that it wants the European countries that buy its natural gas to make their payments in rubles, rather than dollars or euros. A month ago that might have seemed like a pretty good deal: the ruble was down 40 percent, at 139 rubles to the dollar, in the wake of Russia’s invasion of Ukraine.

Since that low point on March 7, however, the Russian ruble has staged a dramatic recovery. At the time of writing, it was trading at 84 to the dollar, which is right back where it was at the time of the invasion. And this is no dead cat bounce. It’s a sharp and sustained recovery that made the ruble the top performing currency in the world in the month of March.

And yet, all of the sanctions imposed when the war began are still in place, and in some cases they’re even more robust. So how have the Russians managed to revive their currency?

The Hole in the Wall Gang

There are several components to this recovery. The first is thanks to the enormous hole in the sanctions imposed by the coalition of countries allied with the United States: natural gas. The sanctions are designed to restrict Russia’s ability to acquire foreign currency, and dollars and euros in particular. But several European countries continue to buy Russian gas, because they have become so dependent on it, and there are not enough alternative suppliers to meet demand.

Add to that the increase in oil and natural gas prices and the resilience of Russia’s trading relations with other big economies like China and India, and the net result is that there is still a steady flow of foreign currency into Russia. That has eased concerns that Russia would become insolvent, and it has helped put a floor under the ruble.

There’s another hole in the sanctions that’s worth mentioning here: the sovereign debt carve out. One of the biggest and most impactful sanctions on Russia was the freezing of its foreign accounts. Russia holds about $640 billion worth of euros, dollars, yen and other foreign currencies in banks around the world. About half that amount is located in the US and Europe. The sanctions blocked Russia’s access to that money … except when it comes to making the interest payments on its sovereign debt. The US Treasury left a window open to allow financial intermediaries to process payments for Russia. That window is scheduled to close this month, but it has been a big help to Russia. Without it, Russia might have needed to raise dollars by selling rubles, which would have put downward pressure on the currency. And were it not able to raise those dollars, it would have defaulted.

Those are the tangible, external factors driving the ruble’s recovery. The internal factors are somewhat less corporeal. On February 28, the Central Bank of Russia increased interest rates to 20 percent. Any Russian who might have been tempted to sell their rubles and buy dollars or euros now has a big incentive to save that money instead. The fewer rubles that go up for sale, the less downward pressure there is on the currency.

Next comes a government requirement on Russian businesses that 80 percent of any money that those businesses make overseas has to be swapped into rubles. This means that a Russian steelmaker that makes a hundred million euros selling steel to a company in France has to turn around and change 80 million of those euros into rubles, regardless of the exchange rate. There are a lot of Russian companies doing a lot of business with foreign companies, making a lot of euros and dollars and yen. The order to convert 80 percent of those revenues to rubles creates significant demand for the Russian currency, thus helping to prop it up.

The Kremlin also issued an edict banning Russian brokers from selling securities owned by foreigners. Many foreign investors own Russian corporate shares and government bonds, and they might understandably want to sell those securities. By banning those sales, the government is shoring up both the stock and bond markets, and keeping money inside the country, all of which helps keep the ruble from falling.

Russian citizens themselves have been targeted by the government, which has restricted them from transferring money abroad. The initial ban said all foreign exchange loans and transfers were to be suspended. This served to keep foreign currency in the country and discourage Russians from selling rubles for dollars or euros, which would put pressure on the currency. Those restrictions have been eased somewhat recently, to give breathing room to Russians who regularly send money abroad, but conversions of hard currency are limited to just $10,000 for individuals through the end of this year.

Perhaps the biggest factor juicing the ruble is a risky ploy by Vladimir Putin that we mentioned at the top of the newsletter: telling certain buyers of Russian natural gas that they must henceforth pay their gas bills in rubles. Natural gas contracts are usually written requiring payment in euros or dollars, and the countries who buy natural gas — the European Union, the US, Canada, Australia, New Zealand, Japan, South Korea, and Taiwan — tend not to have big reserves of rubles on hand. So if Putin is successful in forcing these countries to pay in rubles, they’re going to have to go out and buy them. A lot of them. Demand for the currency will surge, and the price of the ruble will naturally rise. It’s the anticipation of that rise that has helped drive the market value of the ruble higher.

You could say that these moves by the Russian government are just business as usual. After all, the Federal Reserve tweaks interest rates all the time. The US Treasury has restrictions on remittances to certain countries. And why shouldn’t a country be able to stipulate what currency it gets paid in? And don’t governments have a responsibility to defend their currencies anyway? All fair points. What the Russian government is up to here, though, is more than defense of a currency: it is manipulating the market for rubles, and manufacturing demand that would not otherwise exist.

Some observers are saying that Russia has essentially created a Potemkin currency. This is a reference to Grigory Potemkin, who was appointed governor of Crimea after it was annexed by Catherine the Great in 1784. Eager to show Catherine how successful he had been in resettling Crimea with Russian villagers, Potemkin supposedly built and populated a mobile village which he assembled, disassembled and then reassembled along his route as he inspected the region. The governor of the Central Bank of Russia, Elvira Nabiullina, is essentially playing Potemkin to Putin’s Catherine, using a range of tools to make the ruble look like a currency that has value, whilst in fact very few people outside of Russia want to buy a single ruble unless they absolutely have to, and many people inside Russia don’t really want rubles either.

There are big risks to all this government intervention. The protectionist measures enacted by the CBR are effectively a kind of bridge for the ruble. If Russia manages to come to some kind of resolution over Ukraine that involves the withdrawal of sanctions and the reestablishment of trade relations with the West, then the ruble might hold its current value once the measures are withdrawn. If the measures are withdrawn without some kind of resolution, however, the ruble could collapse, hammering the economy, jacking up inflation and causing enormous pain to the Russian people. And the measures — some of them, at least — will have to be withdrawn eventually. Russian borrowers can’t keep paying interest rates of more than 20 percent for long, if they can even conceive of borrowing at that price. Growth will be stifled — the Russian economy is already expected to contract by more than eight percent this year — and industry will slump.

Perhaps the greatest risks are those associated with Putin’s natural gas plot. As we said before, the natural gas contracts that buyers have signed with Russia all say that payment will be made in euros or dollars or other foreign currencies. Putin can’t just cross out “dollars” or “euros” and write in “rubles” where those contracts stipulate how to pay. He has to renegotiate the terms of those contracts. And if he does so, it’s likely that those countries will drastically reduce the amount of natural gas they buy from Russia.

Russia is the world’s biggest producer of natural gas, and the biggest exporter, but it’s not the only source out there, and buyers of Russian gas could pivot to new suppliers. The US is already sending shipments to Europe. There’s talk about supply coming from the UK, Norway, Qatar and Azerbaijan. Israel is mulling the idea of ​​a pipeline. The countries that buy large amounts of Russian gas probably couldn’t all wean themselves off it overnight, but if Russia insists on making this move, it risks turning one of its biggest revenue streams into a trickle. In short, the problem with creating a facade — as Russia has done with its currency — is not just that it might collapse, it might also collapse on you.