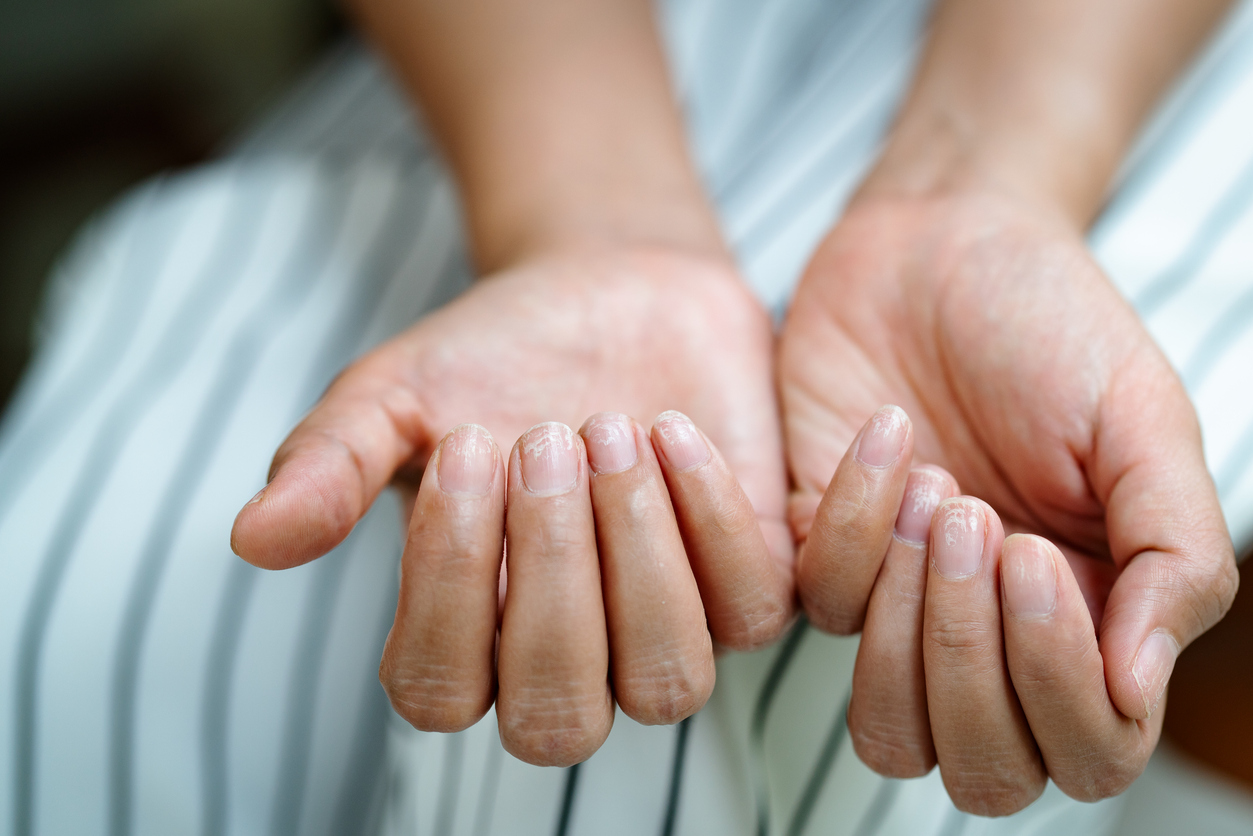 Even after more than two years of study, scientists and doctors are still trying to better understand how COVID-19 works and why it affects certain people so differently. And while data shows certain factors such as age, sex, and compromised immune systems can factor into how a brush with the virus will play out, more focused research is discovering that other less obvious elements, such as genetics, could play a role. But according to one new study, finding out if you’re at a higher risk of severe COVID could be as easy as looking at your hands. Read on to see which health sign your extremities might hold.

RELATED: If You Notice This on Your Hands, Get Checked for Cancer.

The latest information comes from a study published in the journal Scientific Reports on March 17. A team of researchers from Swansea University in the UK, the Medical University of Lodz in Poland, and Sweden’s Karolinska University Hospital set out to explore a theory of how a person’s hormone levels—specifically testosterone—could affect how ill they become when infected with COVID-19.

To test this, scientists based their experiment on previous studies which calculated hormone levels by looking at a person’s relative finger length. Having a longer ring (or fourth) finger indicates higher testosterone levels during development in the womb, while a longer index finger is a sign of higher estrogen levels. This means women typically have longer index fingers, while men have longer ring fingers.

Noting that elderly men are among the most likely to suffer severe outcomes of COVID-19, researchers hoped to expand on previous studies that found conflicting evidence as to whether higher or lower levels of testosterone played into this.

The team gathered 154 participants and measured the second, third, fourth, and fifth fingers on each of their hands. Out of the group, 54 people had been infected with COVID-19, and the remaining 100 acted as a healthy control group.

Results showed that people with a bigger size ratio difference between their second and fourth fingers, as well as between their third and fifth fingers, were associated with more severe cases of COVID-19, according to a press release from the university.ae0fcc31ae342fd3a1346ebb1f342fcb

Ultimately, the research team concluded that an association could be drawn between hormone levels and someone’s experience with the virus, regardless of their biological sex. “Our findings suggest that COVID-19 severity is related to low testosterone and possibly high estrogen in both men and women,” John ManningPhD, one of the study’s authors from the Applied Sports Technology, Exercise and Medicine (A-STEM) research team at Swansea University, said in a statement.

“‘Feminized’ differences in digit ratios in hospitalized patients supports the view that individuals who have experienced low testosterone and/or high estrogen are prone to severe expression of COVID-19,” he explained. “This may explain why the most at-risk group is elderly males.” He added that this discovery could make it easier to prioritize vaccination in particularly vulnerable individuals, based in part on finger length ratios and differences between someone’s left and right hand.

Besides being able to better pinpoint who is at highest risk from the virus, these study results could also help shape how it’s treated in the coming years. According to the university press release, current trials are exploring the use of anti-androgen treatments—also known as testosterone blockers—while others see potential in using testosterone to fight COVID-19.

“Our research is helping to add to the understanding of COVID-19 and may bring us closer to improving the repertoire of anti-viral drugs, helping to shorten hospital stays and reduce mortality rates,” Manning said. “The sample is small, but ongoing work has increased the sample. We hope to report further results shortly.”

RELATED: If You Notice This With Your Hands, It Could Be an Early Sign of MS