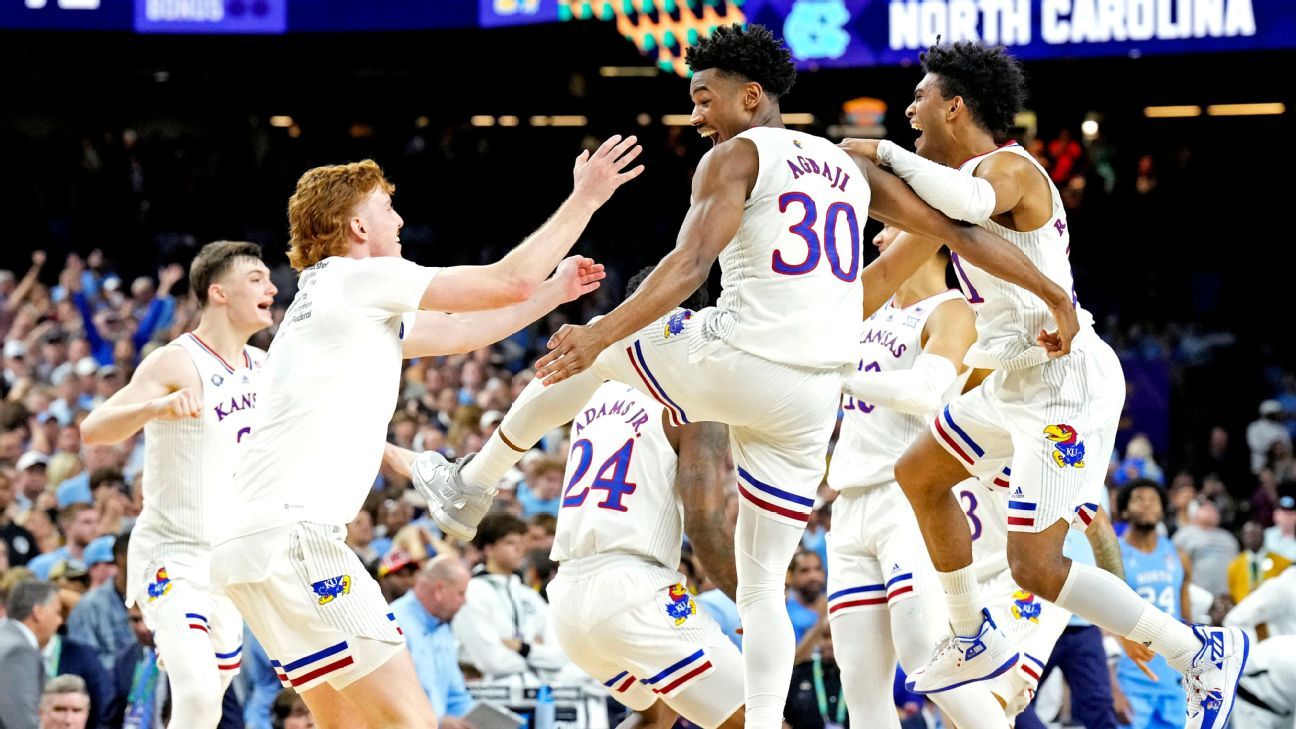 NEW ORLEANS — As he sat just a few rows behind the Kansas bench at the Caesars Superdome on Monday night, Mario Chalmers tried not to squirm.

The program he had led to the 2008 basketball national championship had entered halftime with a 15-point deficit. Chalmers, the hero of that team who hit a 3-pointer to send the game to overtime in a win against Memphis, hoped the Jayhawks would remember what was still possible.

“I just thought, ‘Keep believing,'” Chalmers said after Kansas’ 72-69 come-from-behind win over North Carolina. “The same thing Coach [Bill] Self told us [in 2008] was to keep believing. And I knew they’d be able to pull it out in the end.”

The line between the joy of a hard-fought victory and the agony of almost is thin. Self, who won his second national title on Monday, knows too well after a 2012 loss to Kentucky in the championship game and a lopsided defeat against Villanova in the 2018 Final Four. But his first national title team with Chalmers also had been down in the second half, albeit in a more dire and urgent scenario, so he challenged his 2022 players in the locker room.

“We were disappointed with how we played at halftime,” Self said after staging a 16-point comeback, the greatest deficit a winning team has overcome in the national championship game in NCAA history. “I told them, ‘Would you rather be down 15 points at halftime or nine with [two minutes] left?’ because that’s what happened in ’08. They all said 15.”

The comeback that saved a season — that further bolstered a longtime coach’s legacy — was birthed in that moment. But there was more to it than flying bodies and energized collegiate athletes mounting a powerful offensive attack against a North Carolina squad that had already dismissed Baylor, UCLA and Duke on its way to the championship game in Hubert Davis’ first year.

The Jayhawks knew how much energy North Carolina had expended in a 69-possession, back-and-forth affair against rival Duke 48 hours before Monday’s game. Even though the Tar Heels seemed unconquerable in the first half, the Jayhawks were waiting for the fatigue to arrive.

“We ended up guarding the 3-point line and going inside to the post guys and got a couple of them in foul trouble,” said Kansas assistant Kurtis Townsend. “We really tried to [speed them up]. We thought they’d be worn out from the game the other day. The last round was all we needed.”

Early in the second half, Ochai Agbaji — who took just five shots in the first half with Leaky Black hounding the Kansas star — was more aggressive. His bursts off screens frustrated North Carolina, which played more cautiously with Black trying to avoid his fourth foul and Armando Bacot hobbling on a bad right ankle he had injured late in the win over the Blue Devils. With the shots falling from everywhere — Kansas outscored North Carolina 31-10 in the first 10 minutes of the second half and also outscored the Tar Heels 20-8 in the paint during that stretch — UNC seemed stunned by the way the game had turned. Just five minutes after the break, Black had gone to the bench with his fourth crowd.

But KU’s defensive pressure was critical too. North Carolina made just five 3-pointers all night. In the second half, however, North Carolina finished 2-for-12 shooting from beyond the arc and missed all seven 3-pointers it took on the right side of the court.

The second-half efforts of Jalen Wilson (11 points), David McCormack (nine points), Christian Braun (10 points), Remy Martin (11 points) and Agbaji (four points) put a charge into a Kansas team that outscored North Carolina 47-29 after halftime. But the Jayhawks’ defensive discipline also made one of the most explosive teams of the past month look ordinary.

Six months ago, Self wasn’t sure he had a team that could make this run. He respected the buzz about his 2021-22 squad, which had returned Agbaji, McCormack and Braun and also added Martin, an All-Pac-12 star at Arizona State, but Self wasn’t ready to compare it to his first and only national title team.

“That team in 2008, they played better when they were facing [adversity],” Self told ESPN at Big 12 media day in October. “We got some things that are similar, but I don’t know if when it really gets down to it, how much this team will enjoy that [adversity] when that team loved it. The harder it was, the more they enjoyed it.”

With 3 minutes, 6 seconds to play and the score tied Monday night on the biggest stage in college basketball, however, Martin hits a 3-pointer from the corner and McCormack sank a pair of shots to keep Kansas ahead. The Jayhawks didn’t shrink.

Agbaji even laughed at Self, who was scrambling on the sideline as North Carolina got another possession in the final seconds of a 3-point game after a review showed that Kansas guard Dajuan Harris Jr. had stepped out of bounds.

“[Self] was drawing up something, and he was just so intense and his lips were getting dry,” Agbaji said. “I was like, ‘Whoa, whoa, whoa. …We got it, Coach.'”

With his second national title, Self is now positioned to succeed Mike Krzyzewski as the face of college basketball — albeit within the sport’s most complicated chapter. The introduction of the transfer portal and the era of name, image and likeness deals have added more layers to program building. As the sport’s new champion and the leader of a team that’s still awaiting the outcome of a major infractions case that includes allegations of five Level I violations, Self has been cast as a villain by some and an easy target of a disorganized system that doesn’ t seem to know what it wants from these investigations by others.

Caleb Love’s game-tying attempt is off the mark for North Carolina as Kansas clinches its fourth national title.

But the FBI’s assertion five years ago that it had college basketball’s “playbook” failed to yield the sweeping indictments many had anticipated. The sport has largely moved forward. Self and Kansas might incur penalties in the months ahead, but the judicial process has failed to leave a meaningful mark thus far.

The awkwardness of the moment was illustrated when Mark Emmert, the leader of the NCAA that’s coming for Kansas and other programs, handed the championship trophy to Tom Burnett, commissioner of the Southland Conference and the head of the men’s basketball selection committee, to give to Self, but only after Emmert called the team the “Kansas City Jayhawks.”

Self’s joy never dissipated on Monday, though. A few months ago, he lost his father, Bill Self Sr. Throughout the week, he said he had talked to him, wishing his father had been present for this run — a run that elevates the coach’s status among his peers. On Monday night, Self joined Jay Wright and Rick Pitino as the only active coaches with multiple national titles.

“It feels even better than I thought it would,” Self said before he climbed a ladder to snip a piece of the net at the Superdome.

As the confetti fell and the players cheered, the scene looked familiar to Chalmers, who smiled as he watched the celebration from the crowd.

The Kansas team that had mounted the greatest comeback in national title game history on Monday night had played with a passion Chalmers and his teammates also had tapped into 14 years ago. And he was proud.

“Most teams,” Chalmers said, “would give up in a moment like that.”