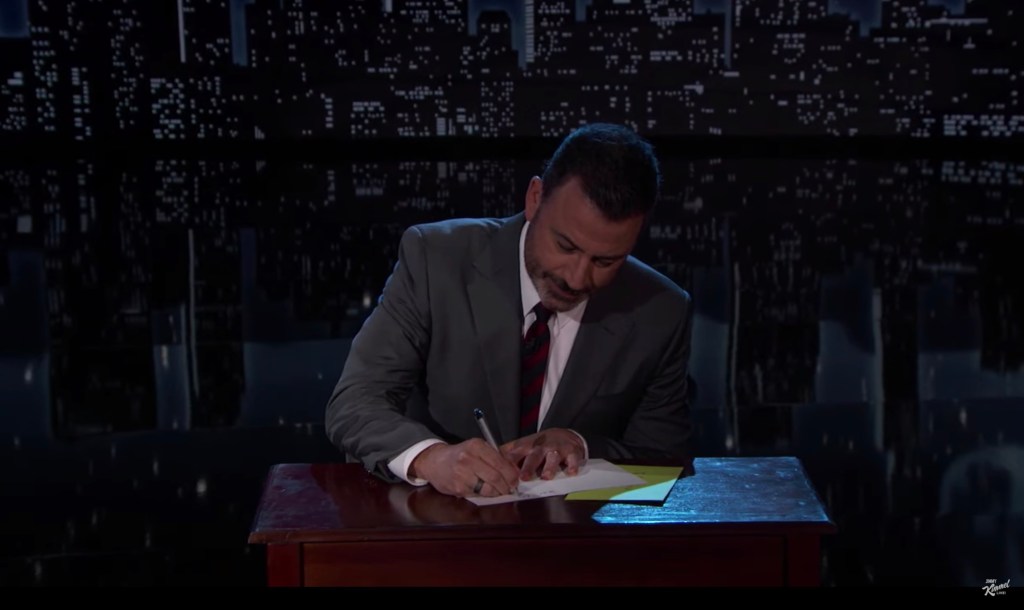 ABC’s Jimmy Kimmel isn’t going to let Rep. Marjorie Taylor Greene out-do him: After the Congresswoman who Kimmel calls a “snociopath” – that’s a combo snowflake and sociopath – reported the late night talker to Capitol Police over a joke, Kimmel went straight to the top. On last night’s show, he reported Greene to Batman.

Kimmel addressed the Greene “brouhaha” at the top of JImmy Kimmel Live! last night, describing how Greene apparently filed a report with Capital Police over Kimmel’s Tuesday night monologue in which the comedian joked, in reference to Greene, “Wow, where is Will Smith when you really need him?”

Greene tweeted yesterday, “@ABC, this threat of violence against me by @jimmykimmel has been filed with the @CapitolPolice.” When Kimmel quickly responded in an answer-tweet, “Officer? I would like to report a joke,” Greene took to Twitter yet again, this time writing, “You weren’t joking. You hide your misogyny and your racism behind your ‘jokes’ on @ABC. This was a dog whistle to the violent left to assault me ​​or worse, and your already inspiring fantasies of violence against me. How many new death threats will I get that are your fans?”

Greene later tweeted, “@jimmykimmel your fans called my office today in direct response to you inciting physical violence towards me. It’s not a joke. You knew exactly what you were doing. @ABC and their parent company @WaltDisneyCo should not allow your misogyny & threats of violence.”

Kimmel addressed her reaction on air last night – pointing out a misspelled “your” in one of her tweets – and noted that not only does he not condone “death or any kind of threats against anyone, especially because I get dozens of [death threats] a week from the sickos who align with you,” but that Greene herself “is the one who endorsed fringe conspiracy theories” and “repeatedly indicated support for executing prominent Democratic politicians.”

“And now she’s dialing 911 because she got made fun of. She’s a snowflake and a sociopath at the same time – she’s a snociopath.”

Kimmel then said he’d follow Greene’s lead and report her, not to the police, but to the Justice League, at which point he sat down and composed his report.

“Dear Batman,” Kimmel wrote, “I’m writing about a woman who might be a supervillain. Like the Riddler she believes the world is full of coded messages. Like the Joker she thinks she is funny, and like the Penguin she is five foot three. Please check her out. Love to Robin. Love, Jimmy.”

Turning to sidekick Guillermo, Kimmel said, “Get this to Gotham City at once! And don’t hesitate! This is for the Caped Crusader to handle!”

.@jimmykimmel your fans called my office today in direct response to you inciting physical violence towards me.
It’s not a joke.
You knew exactly what you were doing.@ABC and their parent company @WaltDisneyCo should not allow your misogyny & threats of violence. https://t.co/GE5MYk80ye pic.twitter.com/lqg8PosZoP