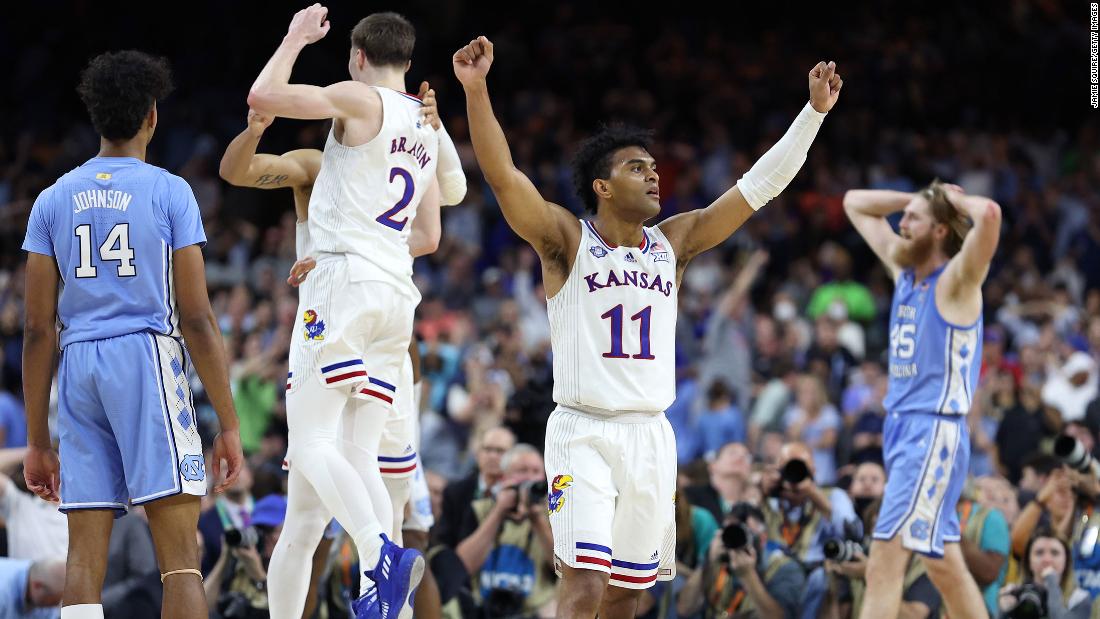 But this was far from a surefire win for the No. 1 seed against the No. 8 seed. Kansas jumped out to a quick 7-0 lead to start the game, but North Carolina soon settled in, going on a 16-0 run late in the half.

Kansas trailed UNC by as many as 16 points in the first half and was down 15 at halftime. According to the NCAA, the 16-point comeback is the largest in title game history. Additionally, per the NCAA, the previous record for largest halftime deficit overcome in a men’s title game was 10, by Kentucky against Utah in 1998.

The Jayhawks came out firing after the half, eventually erasing the Tar Heels’ lead with less than 11 minutes to play. A back-and-forth battle ensued with the game tied 65-65 with 3 minutes remaining.

Kansas soon had a 3 point lead late and turned over the ball with less than 5 seconds remaining when Dajuan Harris Jr. stepped out of bounds, giving the ball back to UNC. But a final heave by Caleb Love was off the mark.

This was the 10th appearance in the title game for Kansas, and the third under head coach Bill Self. This is his second title, the other coming in 2008.

The two illustrious programs took very different paths this season to arrive at the championship game.

The 8th-seed UNC was the clear underdog despite the acclaimed team’s history of success, which includes six national titles. The Tar Heels are led by coach Hubert Davis, who is in his first year in the role at UNC. He took over from Roy Williams, who retired after helming UNC for 18 seasons and Kansas for 15 years before that.

UNC was a team on the bubble just over a month ago, but a late-season run of wins clinched a spot in the tournament. Then came the madness of March, as UNC upset No. 1 seed Baylor in overtime and ended the unlikely Cinderella run of 15-seed St. Peter’s in the Elite Eight.
They followed those with a back-and-forth slugfest over bitter rival Duke on Saturday, sending legendary coach Mike Krzyzewski into retirement with a loss — and inspiring tens of thousands of fans in Chapel Hill into raucous celebrations that left 10 people injured.

Kansas, a No. 1 seed, had a less eventful journey to the title game. The Jayhawks survived close matchups with Creighton and Providence in the earlier rounds, and pulled away late in a romp over 10th-seed Miami to reach the Final Four.

On Saturday, Kansas led wire-to-wire over No. 2 seed Villanova in a comfortable 81-65 win, buoyed by the three-point shooting of senior guard Ochai Agbaji and junior guard Christian Braun. Senior forward David McCormack chipped in 25 points on just 12 shots and sophomore forward Jalen Wilson added another 11 points and 12 rebounds in the win.

Both UNC and Kansas relied on the steady hands of upperclassmen in a sport often defined by star one-and-done freshmen on their way to the NBA.

The Tar Heels featured the scoring and rebounding prowess of junior forward Armando Bacot, the big man who leads the team with 16 points per game. He pulled down 21 rebounds against Duke on Saturday and 22 against St. Peter’s, as UNC racked up a number of second-chance opportunities. However, Bacot hurt his ankle against Duke and could be limited in the title game.

UNC’s lineup also includes three other players who average at least 13 points a game in senior forward Brady Manek and sophomore guards RJ Davis and Caleb Love. Love has been the star of the tournament for UNC and notched a team-best 28 points in the win over Duke, including an off-the-dribble 3-pointer with 25 seconds left that sealed the win.

Kansas, meanwhile, relied on the stellar shooting of Agbaji, who shot 41% from 3-point range this season and led the team in scoring with about 19 points per game. The Jayhawks use an inside-out game as they spread an array of shooters around McCormack’s 6-foot-10 presence in the paint.

They also rely for stretches on forward Mitch Lightfoot, a 6th-year senior and role player who, along with 5th-year senior Chris Teahan, are the only remaining players from Kansas’ 2018 Final Four team. Their presence is only possible because the NCAA granted an extra year of eligibility to all winter sport athletes due to the pandemic.

CNN’s Jill Martin and Travis Caldwell contributed to this report.