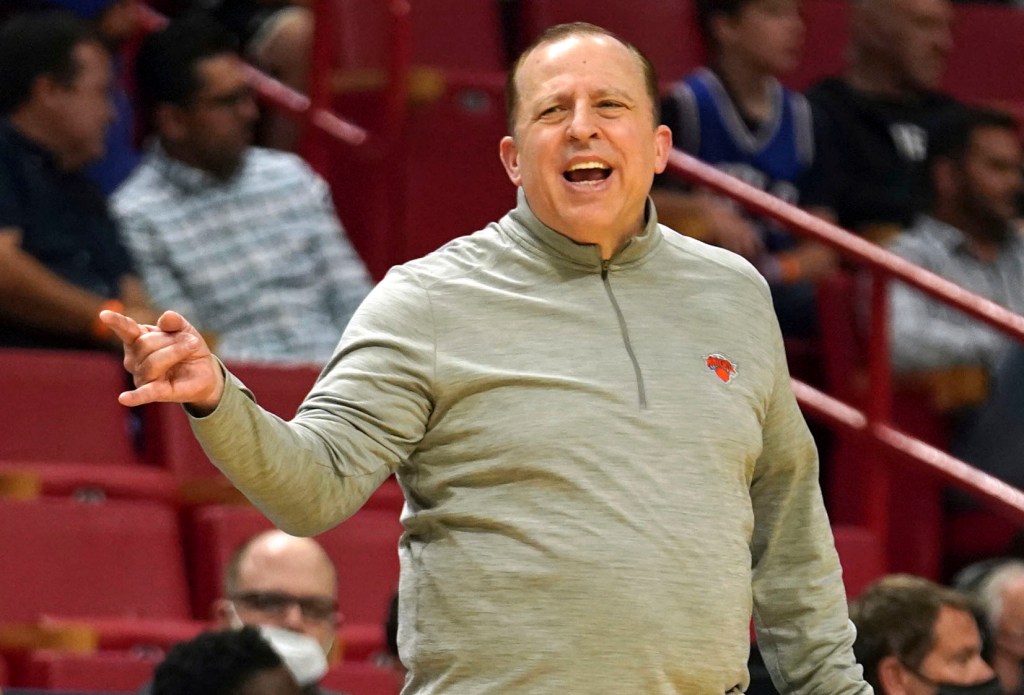 MIAMI — After a season rife with second-guessing of his rotations and starting lineup, Tom Thibodeau expressed concern that media and social media has tried to drive a wedge between his team by pitting player vs. player.

The central theme of a season gone bad revolved around incessant questions on whether certain guys were getting enough playing time.

Why aren’t more young players getting time? Where is rookie Miles McBride? Are the Knicks better off with Randle injured?

Thibodeau finally had enough of it following the Knicks’ 111-103 thrilling comeback win over the first-place Heat on Friday night when backup point guard Immanuel Quickley and three rookies in McBride, Quentin Grimes and Jericho Sims sparked the comeback.

When asked about the explosion by the young guns, Thibodeau got defensive and the press conference veered toward an unexpected direction.

“You guys are trying to nitpick this, nitpick that,” Thibodeau said. “You need everyone across the course of a season. Thibodeau added each player is vital — naming others who didn’t have the same impact Friday, RJ Barrett, Burks, Mitchell Robinson, Randle, who sat out the contest.

“It’s a team not an individual thing,’ Thibodeau said. “Can’t pick up a boxscore after and say, how many people are watching to the end of the game to really know exactly what happened in the game. I see a lot of opinions but I don’t see guys doing the work to actually study it.”

Thibodeau, the 2021 NBA Coach of the Year, was likely not referring to the full-time beat writers covering the team but the array of Knicks fan podcasts and what is proudly called “Knicks Twitter” — arguably the edgiest fan conglomerate on the social -media spectrum.

“It’s where we are in society today. Social media,” Thibodeau said. “Look, hey, it’s part of the game. We love it. It drives the game. It’s as popular as it’s ever been. But to me, I don’t like anything that eats away at the fabric of the team.

“And so, people want to take one game, whether it’s a win or a loss and they went, ‘Well, this, this and this. A guy might make one good play in the game, and he has nine bad plays. Or conversely, he makes nine good plays, and he has one bad play.

Sources have indicated Thibodeau has been most offended by claims he mistreated Walker, who eventually shut it down at the All-Star break, and charges he’s stunted Toppin’s growth because of a lack of playing time.

Thibodeau’s reference that a player could make one brilliant play and nine bad ones could be a reference to Toppin, who hears “O-bi” chants after one showboat dunk.

“I’m just saying, everyone has all the answers right after a game and often times, they haven’t studied,” Thibodeau said. “And I don’t want anything to divide our team. I want our team together. That’s how you win — as a team. You lose as a team.

“So, when I see stuff being written or people talking about this, that. You hear it all the time, and then when you actually do study it and you watch the game again and maybe you watch it a third time, you actually know what transpired.”

It’s not unusual for a head coach to lash out at the media for its second-guessing, but it was strange to come after arguably the season’s most impressive win that kept their season alive, albeit barely. After road victories in Charlotte and Miami, the Knicks (32-42) visit Detroit for a Sunday matinee five games out of the final play-in slot.

That the Knicks kids spurred the win and that they have won two straight minus Randle, Thibodeau probably imagines, will spur more talk he must go younger.

Quickley, who starred with 20 of his 23 points in the fourth quarter, said his teammates are used to the forum.