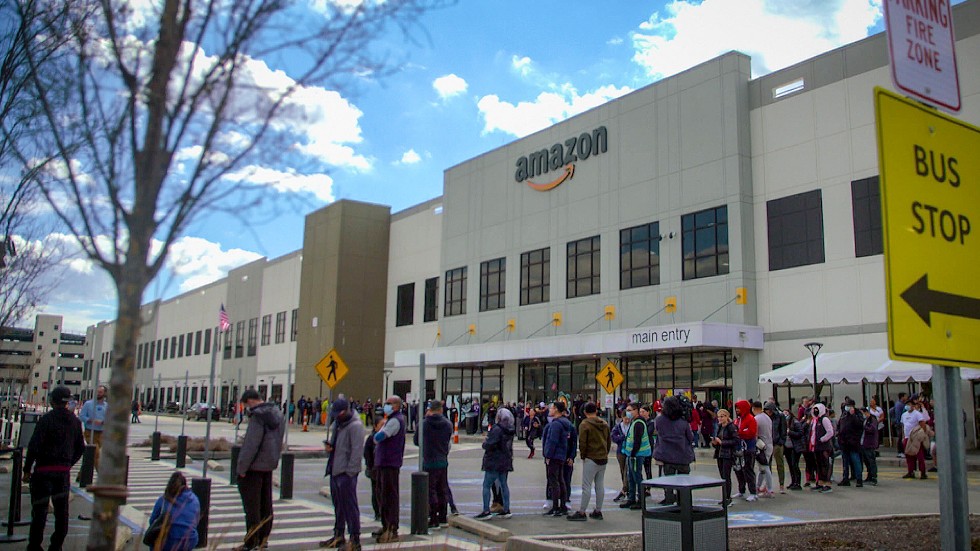 STATEN ISLAND, NY — Gerald Bryson was fired by Amazon in April 2020 after taking part in several protests of the company’s response to the COVID-19 pandemic at its Staten Island, NY, facilities.

Nearly two years later, and despite the National Labor Relations Board (NLRB) finding that he was illegally discharged, Bryson is still fighting to get his job back.

While the lengthy legal process to restore Bryson’s role and grant him much needed backpay has played out, his colleagues at the JFK8 facility have formed a union that is in the midst of a contentious election.

Bryson’s firing and the subsequent delay of his reinstatement have hung over the process. And his case is not the only unfair labor practice charge lobbied against Amazon that remains unresolved as the vote unfolds.

“The board has been unable to create laboratory conditions because of the fact that Amazon every single day is violating the [National Labor Relations Act],” said Frank Kearl, an attorney with Make the Road New York representing Bryson pro bono.

“It’s impossible to protect workers’ rights and give workers the opportunity to have a genuine, neutral democratic vote because the violations are so baked into the atmosphere out there at JFK8.”

There are several factors that can explain why resolving Bryson’s case and others like it has taken so long. One is that the National Labor Relations Act does not give the NLRB much firepower to work with.

“When there is election misconduct that rises to the level of an unfair labor practice the board’s remedies are quite limited,” said Jeffrey Hirsch, a law professor at the University of North Carolina School of Law.

The NLRB cannot independently fine employers for violations, which makes the calculation much simpler for companies deciding whether to push the limit on rules.

Other unresolved unfair labor practice charges filed during the JFK8 election include one over the arrest of fired employee-turned-Amazon Labor Union (ALU) President Christian Smalls and two other workers outside of the warehouse and another about Amazon’s use of captive audience meetings.

The Retail, Wholesale and Department Store Union, which would represent Amazon workers at the company’s Bessemer, Ala., facility in the event a union victory, also filed an unfair labor practice complaint concerning mandatory anti-union meetings, which remains pending.

In Bryson’s case, Amazon has managed to delay proceedings several times by refusing to comply with evidentiary requests, knowing that it would not be punished, according to Kearl.

The board this month used one of the relatively few tools at its disposal, pursuing a Section 10(j) injunction in federal court, to push for Bryson’s reinstatement.

The NLRB requested in a lawsuit that he be reinstated before the union election out of concern that other workers might feel the agency cannot protect them, but the judge decided to delay offering immediate relief to make time for discovery.

Make the Road New York filed an amicus brief Tuesday urging the judge to reconsider that decision, arguing that failing to restore Bryson will only encourage Amazon to delay the case even further and encourage other anti-union employers to follow the same playbook.

“Their tactic is delay, delay, delay,” Kearl said. “Time is a weapon and they will continue to use time as a weapon against worker organizers until somebody steps up and stops them.”

Amazon’s seemingly limitless resources, with teams of high priced lawyers ready to respond to the multiple unfair labor practice charges filed during the course of the union campaigns in Staten Island and Bessemer, Ala., highlights the NLRB’s relative deficit.

The agency has lost nearly 40 percent of its workforce over the last twenty years, an agency spokesperson told The Hill, and although case intake has also slightly declined during that time, the NLRB is stretched thin.

The downsize has been felt especially hard at its 26 regional offices, which are responsible for many of the day-to-day activities like handling representation cases and investigating worker complaints. One NLRB employee told The Hill that since starting 10 years ago, their regional office staff has been cut in half.

The lack of staff means that items like Bryson’s unfair labor practices case are often put on the back burner, resulting in the kind of delays that have plagued this case.

That has been especially true now with a recent surge in petitions for representation, cases that are almost always prioritized by staff because of their tight deadlines.

“This uptick in the last year or two, or at least what looks like an uptick, particularly in elections…is kind of an unexpected strain on resources,” Hirsch said.

Staffing deficits manifest themselves in elections as well. On the first day of voting at JFK8, when nearly a thousand workers were attempting to cast their ballots, the agency only had seven staffers available onsite to process voters, according to an ALU organizer.

Some workers at the NLRB have also had to expend time and energy negotiating with their own employer.

The agency has demanded that regional staff return to offices several times during the pandemic while the board’s staff union is actively engaged in negotiations over work-from-home policies, according to Michael Bilik, a field attorney for the NLRB in New York and the union’s national legislative chair.

“The threat to implement before bargaining was complete undermines trust, especially given our mission to prevent and remedy that exact behavior,” he told The Hill.

The agency pulled its requirement to return to the office shortly after New Years Day because of the emergence of the omicron wave of the coronavirus. The agency and union came to an agreement Wednesday to slowly bring staff in after the NLRB initially set next week as a required return date.

“We protect these rights for workers in the private sector throughout the country, but we have to basically fight claw to have any semblance of them ourselves,” Bilik said.

The delays in processing cases because of the NLRB’s lack of enforcement power and diminished resources have material impacts.

Bryson, who Amazon says was fired for “bullying, cursing at, and defaming a female co-worker” during a protest, remains out of work.​​

They also hamper the ability of workers to organize.

“This is bigger than Gerald,” Kearl said. “This is about the ability of the agency to continue to operate and continue to have the public trust so that people will feel comfortable engaging in protected activity against Amazon or any other employer.”