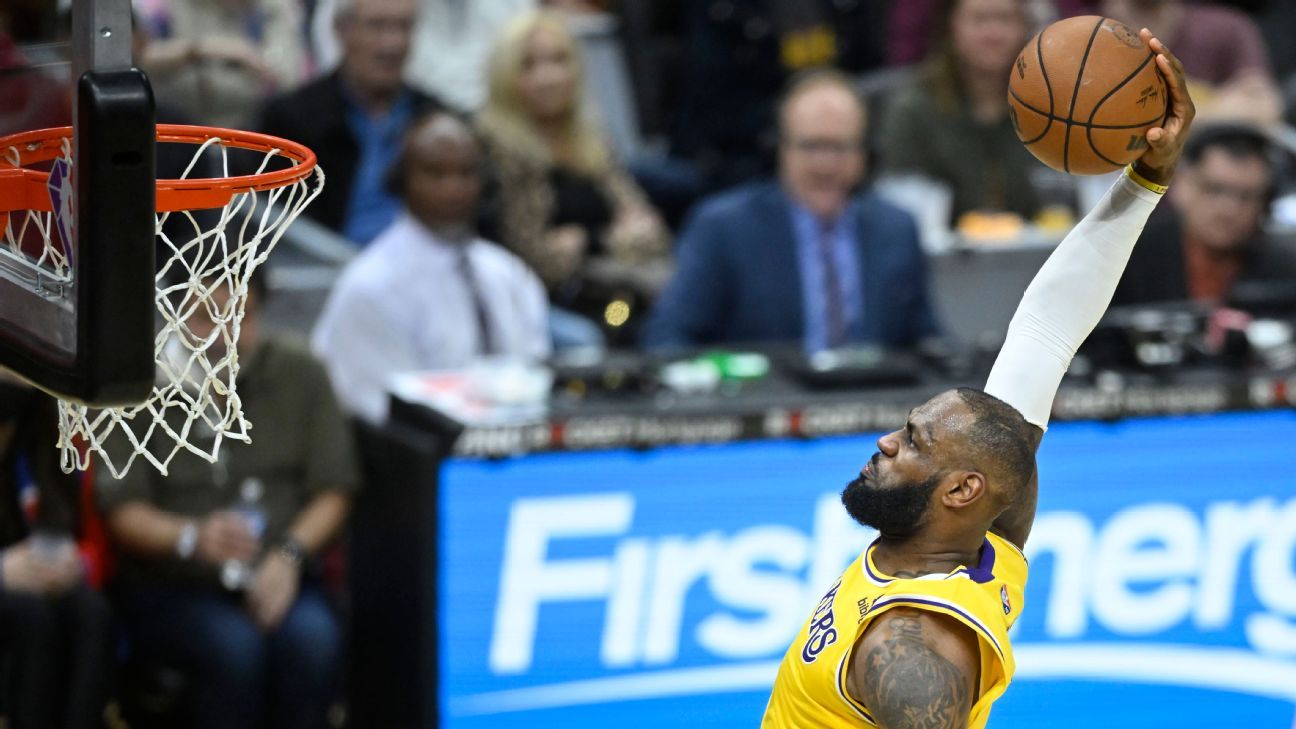 CLEVELAND — With the Los Angeles Lakers’ flat-lining season experiencing a bit of a blip with Monday’s 131-120 win over the Cleveland Cavaliers, LeBron James says he still has something left to play for.

“I’m literally having the time of my life right now,” James said after the Lakers finished their four-game road trip by winning two of their final three. “The game’s such a beautiful thing.”

LA’s spot in the standings is anything but beautiful, even with the upswing, as the Lakers still sit at No. 9 in the Western Conference — one game ahead of the No. 10 New Orleans Pelicans and three games up on the No. 11 San Antonio Spurs — with 10 games left to play.

But James, who poured in 38 points, recorded 12 assists and grabbed 11 rebounds in lifting his all-time record to 17-1 against his former franchise, is locked into the present moment his team finds itself in.

With four championships and 10 trips to the NBA Finals on his résumé already, why does the 37-year-old star still find purpose with a team just hoping to scrape its way into the play-in tournament?

“Because I couldn’t care less what the narrative about our team is,” James said. “At my point in my career, I don’t get involved in that stuff. I don’t read about it, I don’t hear it too much. … None of that stuff matters to me, I’m having a blast playing the game of basketball.”

Lakers coach Frank Vogel said that James’ play — he averaged 37.3 points on 57.1% shooting, 10 rebounds and 8.3 assists to end the trip as LA beat two playoff teams in Toronto and Cleveland and narrowly lost to Washington after leading by as many as 16 — has kept his group competitive despite how the season has gone.

“This is a league that when things don’t go the right way, it’s not a pleasant thing to be around,” Vogel said. “This team has not let go of the rope and the biggest, No. 1 reason is because of how he’s played and how he’s led and what he represents in terms of having confidence about where we can ultimately get to.”

James got to relish in the glory days a bit on Monday. He racked up his third career triple-double against the team that drafted him and received a lengthy, rousing ovation from the Cleveland crowd when the videoboard acknowledged him passing Karl Malone to become the NBA’s No. 2 all-time scorer over the weekend. And he gave a special welcome to his old teammate, Kevin Love.

He dunked on him.

“To be completely honest, I hated that it had to be him,” James said with a smile. “He’s my guy. That’s my brother. And I hope I’m still invited to [Love’s] wedding. That’s not even in my all-time dunks so I’ll take it out. I didn’t mean it. K-Love, I love you and I take it back. I wish I could take those two points back and we still win the game by nine.”

LA had that cushion thanks to not only James, but Russell Westbrook (20 points, 11 assists) and DJ Augustin (20 points on 7-for-7 shooting).

“Internally, we feel like we’re a great team and we can do something special,” Augustin said. “Make a run. Get into the playoffs. And make a run in the playoffs. And as long as we believe in each other, it doesn’t matter what anybody else thinks.”

Westbrook said he is motivated to prove the doubters wrong who have commented on the Lakers’ woes all season long.

“Nothing better than shutting people up,” he said.

The Lakers might have quieted the noise for a night, but still have six of their final 10 games on the road and the home games aren’t giving up either, with the Philadelphia 76ers and the Denver Nuggets coming to town.

“I’m going to play with a lot of passion, a lot of energy, give my teammates what they deserve, what they need and like I said for the rest of the season hopefully I can stay somewhat injury-free,” James said . “Obviously, I’m dealing with a few injuries right now, but I’m working through it and we’re working through it and that’s all that matters. We leave everything on the floor and control what you can control and what you can ‘t you don’t worry about. Just my mindset.”