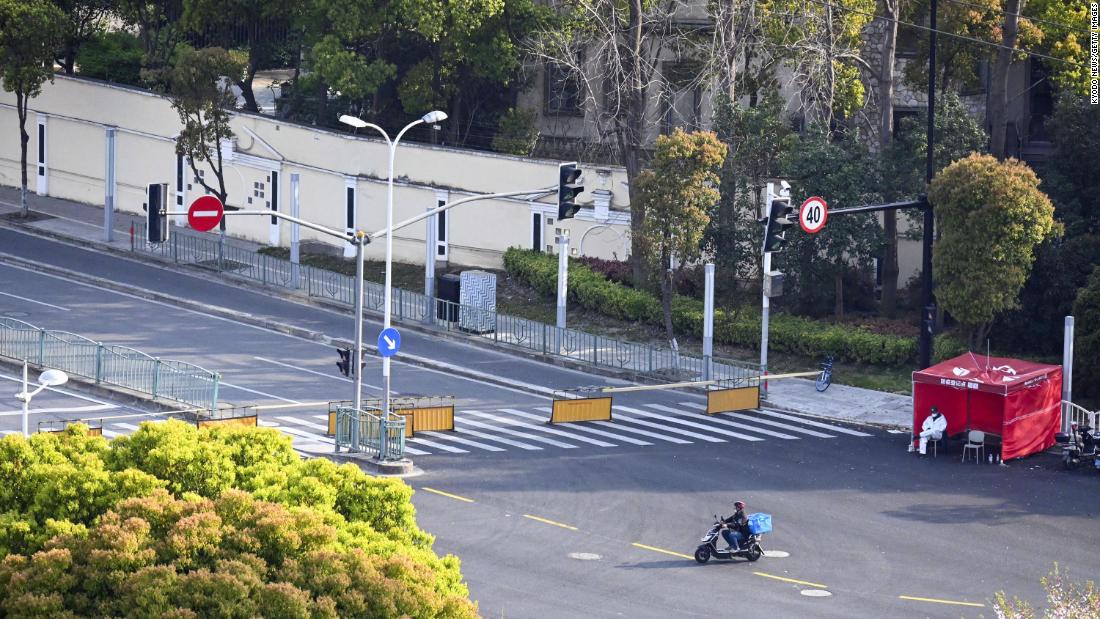 Shanghai — home to China’s leading financial center and some of its largest sea and airports — has been under lockdown for 12 days, and there’s no sign of it ending.

Small businesses have been hit hard, with shops and restaurants being forced to shut down. Tesla, as well as many Chinese and Taiwanese manufacturers, are unclear about when they can restart their factories. Meanwhile, port delays are getting worse, and air freight rates are soaring, putting even more pressure on global trade.

The stringent restrictions have dispelled any expectations that the country may relax its zero-tolerance approach towards Covid-19.

“The surging cases in Shanghai convinced top leaders that there is no middle ground between zero-Covid and living with Covid. From now on, snap lockdown could be the prevailing strategy,” said Larry Hu, chief economist for Greater China at Macquarie, in a research report this week.

President Xi Jinping has pledged to “minimize” the economic impact of his Covid policy, but the deteriorating situation in Shanghai — and the extended lockdown — raise tough questions about Beijing’s approach to outbreaks of Omicron, a much more infectious variant of the original virus.

“The Omicron variant is highly infectious, and it has become increasingly challenging for China to reach its ‘zero-Covid’ objectives while most other countries opt for a ‘living with Covid’ approach,” Ting Lu, managing director and chief China economist for Nomura, wrote in a note earlier this week.

He believes that China’s rising cases and escalating lockdowns in Shanghai and several other cities will suppress activity across a wide range of sectors, including in-person services, travel, logistics, construction and some manufacturing.

“The economic costs could be staggering,” Lu said, adding that global investors may be “underestimating” the impact of China’s zero-Covid policy on its economy and the markets.

Since last month, full or partial lockdowns have been implemented in about 23 cities, according to latest estimates by Nomura. Those cities have around 193 million residents combined — 13.6% of China’s population — and contribute 23 trillion yuan ($3.6 trillion) worth of GDP — 22% of the country’s economy.

“These figures could significantly underestimate the full impact, as many other cities have been mass testing district by district, and mobility has been significantly restricted in most parts of China,” Lu said.

By Thursday, at least 40 Chinese companies had been forced to suspend operations in Shanghai and other regions, according to stock exchange filings in Shanghai, Shenzhen, and Beijing.
Meanwhile, more than 90 Taiwanese companies have reported that their operations in Shanghai and the neighboring city of Kunshan were affected by the lockdowns, including printed circuit board manufacturer Unimicron Technology and top bike maker Giant Manufacturing, according to filings to the Taiwan Stock Exchange.

The World Bank and some investment banks have recently warned that the damage caused by China’s zero-Covid policy to the economy is growing.

The World Bank on Tuesday slashed China’s 2022 growth forecast, estimating that the world’s second largest economy will now grow at 5% this year, sharply down from last year’s 8.1%. That’s also lower than China’s official target of about 5.5%.

“The continuation of China’s zero-Covid policies in the face of the Omicron variant will hurt economic activity in China and have negative spillovers onto the rest of the region,” the World Bank said in its latest economic update for the East Asia and Pacific region .

Goldman Sachs on Monday maintained its 2022 growth forecast for China at 4.5%, a full point below the official growth target. But the bank pointed out that the latest outbreak and the lockdown in Shanghai are starting to “weigh more heavily” on economic activity in China.

It could get worse

The Shanghai lockdown comes at a time when the country’s economy is already struggling.

Services and manufacturing were both hit hard last month. The Caixin Purchasing Managers’ Index (PMI) for services recorded its sharpest decline since the initial Covid-19 outbreak in Wuhan in February 2020.

The Caixin manufacturing PMI also contracted at the quickest pace in two years. The deterioration in economic conditions was also reflected in official PMI data.

April’s data could be even worse, economists warned, as lockdowns continue to hurt domestic demand.

“Following several rounds of lockdowns, many individuals are worn out, unemployed or underemployed, and have drained their savings to a level at which they now have to reduce spending,” said Lu from Nomura.

The crisis in China is also a problem for the world.

The World Bank labeled China’s slowdown as one of the major shocks facing Asian economies this year, along with the war in Ukraine and rate hikes by the Fed.

The situation in Shanghai, which has the world’s largest container port, has caused shipping delays to worsen, putting more pressure on global supply chains. Although Chinese authorities said the Shanghai port remains operational, industry data showed last week that the number of vessels waiting to load or discharge had skyrocketed to an all-time high.

It could cause “extra inflationary pressures” on goods imported from China.

Air freight rates are rising too. All passenger flights to Shanghai, one of the world’s busiest airports, have been canceled. Schreiber said air cargo rates between Shanghai and northern Europe shot up 43% last week from the level before the outbreak.

Factory closures in Shanghai and neighboring cities could add to the disruptions to key supply chains for electronics and automotives.

For example, Kunshan-based Unimicron Technology supplies printed circuit boards to customers such as Apple, while Eson Precision is an affiliate of Foxconn, which makes iPhones. Eson Precision also supplies components to Tesla.

“It is very likely that given the severity of the current outbreak in China, electronics and automotive supply chains will experience significant disruption due to supplier outages in the coming 7-10 days,” said Julie Gerdeman, CEO of supply chain analytics firm Everstream.