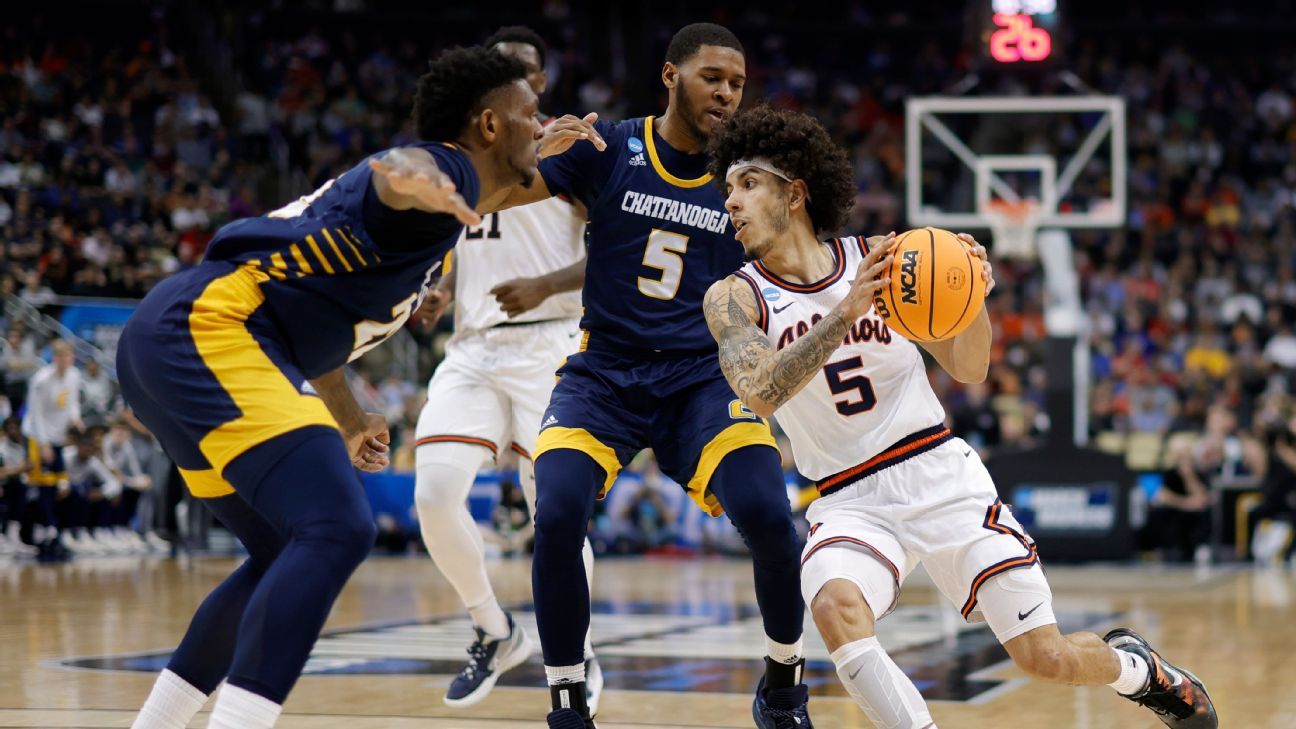 Is March Madness 2022 wild enough yet? How’s your bracket doing?

Friday’s NCAA tournament games saw its share of underdogs coming out on top as No.11 Notre Dame downed No. 6 Alabama and No. 10 Miami beat No. 7 USC.

“I’m just going to go for it, and that’s what I’ve tried to do all season long,” Krzyzewski said Thursday. “I just want to be in the moment. I’m excited.”

“AND THE CYCLONES ARE DANCING INTO THE ROUND OF 32” 🕺

Iowa St. moves on to play the winner of (3) Wisconsin vs. (14) Colgate@CycloneMBB #MarchMadness pic.twitter.com/WkbcTLwYGd

No. 11 Iowa State’s win over No. 6 LSU had some big implications outside of the Big Dance. The Cyclones’ 5-point upset win ended any chances of a perfect bracket for 17.3 million ESPN tournament challenge entries.

Iowa State freshman Tyrese Hunter was the game’s leading scorer and joined elite company alongside Stephen Curry as the second player with seven 3-pointers and five steals in an NCAA tournament game.

The Fighting Illini trailed for the majority of the contest, but took the lead when it mattered most. Late buckets by Kofi Cockburn and Alfonso Plummer in the final minute elevated their team to a 54-53 win. The last possession came down to defense, and Illinois delivered.

The Duke Blue Devils started their final tournament run of the Mike Krzyzewski era against No. 15 seed CalState Fullerton. Paolo Banchero scored 17 points and 10 rebounds to lead his team to a 78-61 victory. This win improves Coach K’s record to 25-1 in tournament openers as a top-2 seed, per ESPN Stats & Information.

The legendary coach had plenty of supporters present.

one does not try EG. pic.twitter.com/ZMFupzTFwJ

Somebody should have warned Iowa State guard Izaiah Brockington about LSU sophomore Eric Gaines’ hops. Gaines flew through the air for the chase-down block during a fastbreak in the first half. Watching footage of the rejection is the only way to truly appreciate the play.

.@terrellowens out here trying to will his alma mater to a W 🔥#MarchMadness @GoMocsMBB pic.twitter.com/25O0eJ1ATE

Chattanooga has elite company in attendance for its game against Illinois. Pro Football Hall of Fame wide receiver Terrell Owens showed up in Pittsburgh to support his alma mater, exchanging pregame handshakes with the team. Owens played football for the Mocs from 1992-95 and also earned two varsity letters in basketball, per the school’s website.

.@CanesHoops is DANCING ON to the Round of 32! 🔥🕺#MarchMadness pic.twitter.com/CQbhUXk5uK

It was a back-and-forth affair between No. 10 seed Miami and No. 7 seed USC. Both teams traded buckets down the stretch, but Hurricanes guard Charlie Moore hit two critical free throws to propel his team over the Trojans 68-66. Guard Isaiah Wong led the team with 22 points despite fouling out late in the contest.

Texas guard Andrew Jones is off to a hot start against Virginia Tech, scoring 17 points and shooting 5-of-6 from 3-point range in the first half. Only two other Longhorns hit a 3-ball before the break. Marcus Carr is one of the two with his last-second heave from beyond half court.

Lots of support out in South Carolina thanks to @ChevezGoodwin‘s family and friends! pic.twitter.com/foHtf3BVLj

Chevez Goodwin lucked out when it came to March Madness this year — his USC Trojans are playing in Greenville, South Carolina, and his family is from Columbia. Just a few hours away, and they’re out in force to support him as he helps take on the Miami Hurricanes.

Villanova is engaged in a close 15-2 matchup against Delaware, and forward Jermaine Samuels is stepping up, denying a layup on defense and then throwing down a monstrous jam on the other end.

Jabari Smith throws it down

GREENVILLE, SC — Bruce Pearl made the all-too-familiar sound of the SportsCenter theme. About a half-hour earlier, in Auburn’s close-out of Jacksonville State in the first round of the NCAA tournament, his star forward, Jabari Smith, had a dunk he was sure would make the highlight real.

“It’s going to be on SportsCenter tonight,” Pearl said. “And isn’t that every kid’s dream? But he posted him. He really did. And those kids love it. They obviously loved it.”

Sophomore guard KD Johnson raved about the dunk after the game..

“Did y’all see that? It’s crazy,” Johnson said. “I didn’t know he was going to do that. He never did that in practice. First time he ever showed he could ever get that high, so that was crazy.”

Center Walker Kessler joked he didn’t think his teammate would be able to pull that dunk off, eliciting an “oooh” from the media, before quickly correcting himself: “But, I mean, probably. It was a pretty nasty dunk.”

Smith didn’t know if he would be able to pull that off either. And as he went up, it wasn’t going to be his plan. It just sort of happened.

“I was going to attack the rim,” Smith said. “I knew he was going to foul me but I didn’t know I was going to make it until I jumped and am like, ‘I can really dunk on that.’ I just finished it.” –Michael Rothstein

Sister Jean in the house

What would a Loyola Ramblers game be without their beloved Chaplain Sister Jean? The 102-year-old nun is in Pittsburgh on Friday for her team’s game against Ohio State.

POTUS on their side

Sometimes you have to make bracket picks with your heart. President Joe Biden put aside seeds, odds and opponents and picked his alma mater, the Delaware Blue Hens, to win both the men’s and women’s tournaments.

I’m proud of all the athletes competing in this year’s NCAA tournament. But at the end of the day, I’m a @UDelaware guy. Go Blue Hens! pic.twitter.com/fG89BfvNAP

Everyone’s been on a long road trip. People take too many bathroom breaks. They try to take photos from moving cars. Souvenirs are bought. According to Chris Del Conte, the Longhorns’ athletics director, he had travel issues with his flight from Austin, Texas, to Milwaukee for Texas’ first-round game Friday.

So Del Conte got a car with some Texas fans and headed north. According to the feed, Del Conte got pulled over in a traffic stop — in Oklahoma, of course.

Met these dude at Austin airport after two plane delays we decided to drive to Milwaukee., Wheels, Hodges and me rolling along 1-35 expected drive time 17 hours .. Keep the light on boys will be coming in late pic.twitter.com/AMhV6sLMtw

Escape Oklahoma with just a warning… Buford T Justice is on the prowl.🤘🏽 https://t.co/M4RCIzkqbd pic.twitter.com/cfVtN93fhB

Met up with some great Longhorn at Jimm’s in Springfield .. Thanks Cedric and Tony for the outstanding suggestion.. time to hit the road 🤘🏽 https://t.co/GQ6oq2bkRQ pic.twitter.com/iuMWKDRAHp

This is Anthony Walker on the mic.@antgotclout #MarchMadness x Miami pic.twitter.com/y4mqi4HZCi