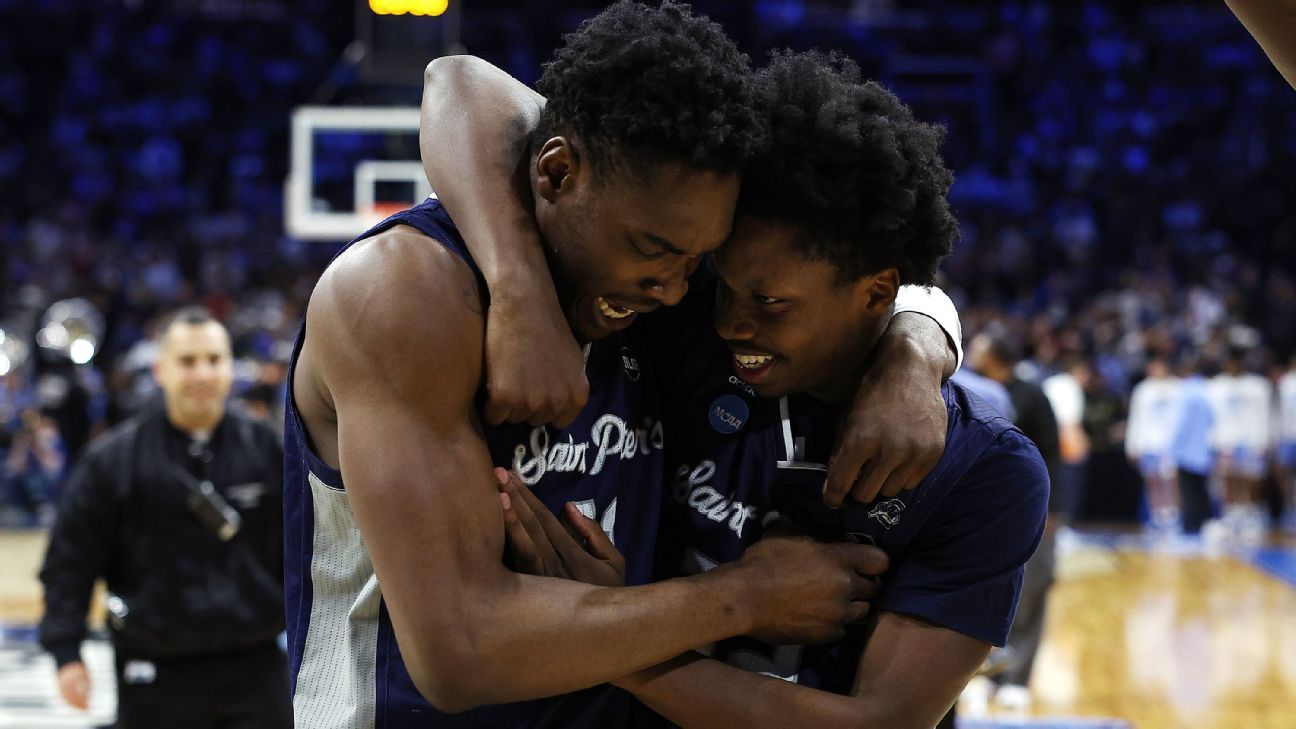 With their 2022 NCAA tournament run, you can add the Saint Peter’s Peacocks to that list — even if their March Madness appearance lasts for only a few more days.

On Friday, the team made its first Sweet 16 appearance in Philadelphia, just 90 miles from its home arena, and faced 3-seed Purdue in the East Region semifinal.

The Peacocks came out on top and made history as the first 15-seed to make the Elite Eight.

Last weekend, Saint Peter’s followed up its opening 85-79 overtime win over Kentucky with a 70-60 victory against Murray State in which the Peacocks never trailed to become the third 15-seed to reach the Sweet 16.

These days, the Peacocks are living a charmed life as a Cinderella team and enjoying being the underdog darling of the tournament. Here’s a look at their week:

The Peacocks’ St. Patrick’s day upset win over Kentucky was the start of this Cinderella story. It also spurred a new holiday that might be celebrated in the state for years to come.

The Peacocks also received congratulations from a fellow underdog.

In 2018, the UMBC Retrievers became one of the most well-known squads to wear March Madness’ proverbial glass slipper after becoming the first 16-seed to beat a 1-seed.

Getting verified on Twitter is just one of the perks that come with defeating the No. 2 seed. Less than 24 hours after the big win, the Peacocks were blue-check official. They also reposted an introduction thread of the team that includes a “phenomenal” mustache, a set of twins, an aspiring actor and much more.

You’ll find all of the information is still extremely accurate#StrutUp🦚 https://t.co/8W7CeYk7ei

Head coach Shaheen Holloway and guard Doug Edert have seen their social status grow as well. According to Twitter, Holloways has averaged 601 new followers a day since the win over Kentucky. Edert, who got an NIL deal with Buffalo Wild Wings, has added 82 followers a day.

You know the saying about birds of a feather? In this instance, the Saint Peter’s spirit squad and Peacock, the NBCUniversal streaming service, flocked together.

What?! Birds of a feather MUST flock together. Pack your bags Spirit Squad. We’re getting you to the game. Can you be ready in…a few hours?! 🏃‍♀️💨 We’re making this happen. #PeacockProud https://t.co/dIuK357DmE

The state of Kentucky had a tough time competing with New Jersey as far as basketball is concerned. The second-seeded Wildcats and No. 7 seed Racers both hailed from the Bluegrass State and fell to Saint Peter’s.

“SAINT PETER’S HAS DONE THE UNTHINKABLE” 😱

THE 15-SEED PEACOCKS ARE HEADED TO THE #SWEET16@PeacocksMBB #MarchMadness pic.twitter.com/aQpOfjJNzS

The Peacocks’ second upset of the week was met with praise from several local teams and another feathered friend.

this is a win for birds everywhere!

When asked about how his team matches up against bigger teams, Holloway, who is from Queens, New York, and played at Seton Hall, had a very fitting response that has made its way onto local billboards.

“I’ve got guys from New Jersey and New York City. You think we’re scared of anything?”

“You think we’re worried about guys trying to muscle us? WE do that.” 💪

In my Saint Peter’s column from yesterday, I wrote that someone should slap Shaheen Holloway’s quote about “guys from New Jersey and New York City” on a billboard. Well, today… https://t.co/nsQhZxxyYn pic.twitter.com/tgEfEk7t7R

The Peacocks play their home games at Run Baby Run Arena, and the party upon returning to Jersey City appeared to be just as lively as the facility’s name.

After the party, the team hosted a special visitor in New Jersey Gov. Phil Murphy, and Coach Holloway appeared on Good Morning America.

That’s weird, normally Juju is the one dishing out assists 👀

Saint Peter’s hosted two parties in as many days as its Sweet 16 send-off drew plenty of supporters. Those who weren’t able to attend the in-person celebrations could at least view the celebratory sign on the New Jersey Turnpike.

Apparently former New York Giants quarterback Eli Manning has always been a big Peacocks guy. We aren’t questioning the timing, and neither are the New Jersey Devils.

Cinderella couldn’t be stopped in the City of Brotherly Love. Saint Peter’s knocked off Purdue 67-64 and became the first school from New Jersey to reach the Elite Eight since Seton Hall in 1991.

Is there any other way to celebrate National Peacock Day?

YOUR PEACOCKS ARE HEADED TO THE ELITE EIGHT!!