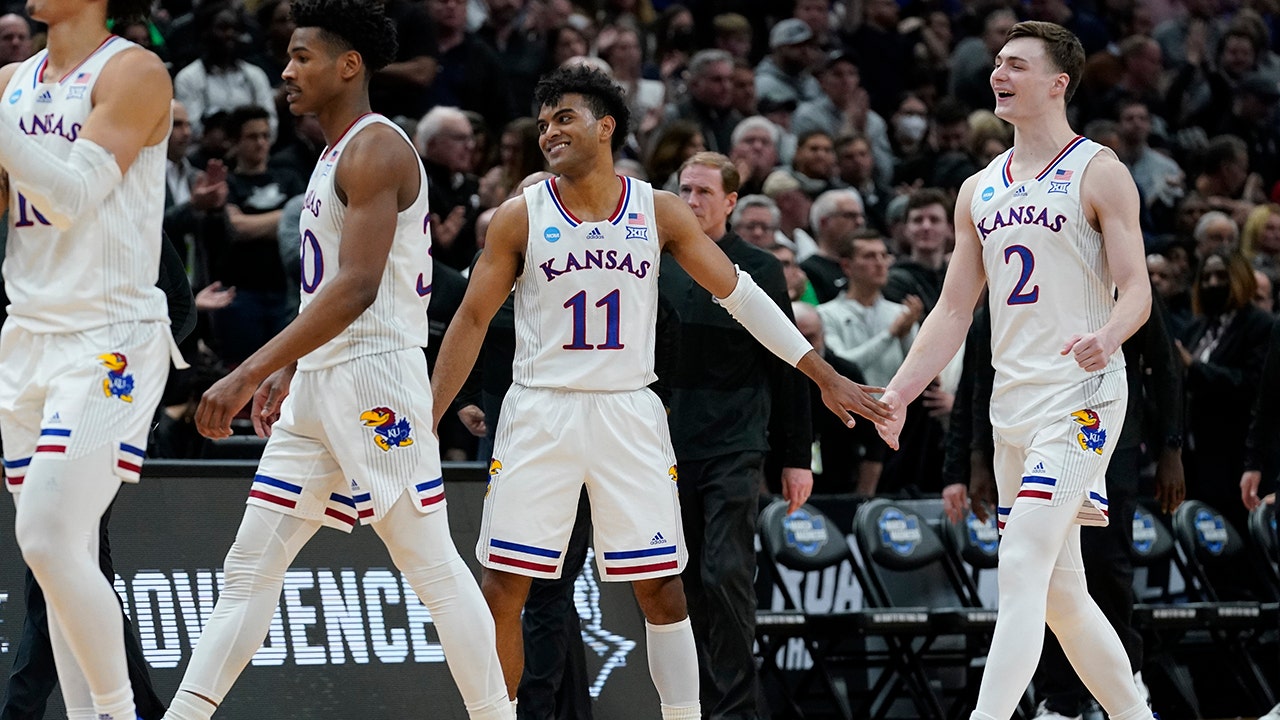 Remy Martin scored a season-high 23 points and Kansas did its part as the only No. 1 seed left in the NCAA Tournament, holding Providence to 17 first-half points and hanging on for a 66-61 victory on Friday night to reach the Elite Eight.

The Jayhawks (31-6) made it farther than fellow No. 1 seeds Gonzaga and Arizona, both ousted in the Sweet 16, and Baylor, whose title defense ended in the second round. They will face either Miami or Iowa State in the Midwest Region final on Sunday.

Jalen Wilson added 16 points and 11 rebounds for the Jayhawks, who are back in a regional final for the first time since 2018, when they reached their 15th Final Four. Coach Bill Self is seeking his fourth trip there since he arrived in 2003.

Kansas’ Remy Martin and Christian Braun celebrate after the second half of a college basketball game in the Sweet 16 round of the NCAA tournament against Providence Friday, March 25, 2022, in Chicago. Kansas won 66-61.
(AP Photo/Nam Y. Huh)

Kansas also moved ahead of Kentucky for most wins in Division I history with 2,354.

The Jayhawks led by 13 points early in the second half, let it slip away, and then regrouped. Fourth-seeded Providence (27-6) took a short-lived one-point lead, but Kansas responded by scoring seven straight.

Big 12 Player of the Year Ochai Agbaji scored a season-low five points. But with Martin and Wilson leading the way, the Jayhawks won their eighth straight since a 74-64 loss at TCU on March 1.

Al Durham led Providence with 21 points. But the Friars shot 33.8% and made 4 of 23 3-pointers as their best run since reaching the regional finals in 1997 under Pete Gillen came to an end.

Kansas led 26-17 at halftime and 36-23 early in the second half before Providence went on a 9-2 run, capped by Ed Croswell’s three-point play.

That drew a loud roar from the Friars’ fans, and they had more to cheer after Noah Horchler nailed two 3-pointers in about a 50-second span to cut it to 41-40 midway through the half.

Reeves tied it at 44-all when he hit two free throws, and Horchler gave Providence his first lead at 48-47 when he scored on a layup with 5:49 remaining.

Jalen Wilson drove for a three-point play to put the Jayhawks back on top. Christian Braun added one of his own, and a steal by Wilson led to a layup for David McCormack, making it 54-48 with 4:12 to play.

Agbaji had the Kansas contingent roaring when he threw down an alley-oop dunk to make it 57-50. AJ Reeves answered with a 3 for Providence, but Kansas remained on top the rest of the way.

Providence: Coach Ed Cooley’s Friars made a huge jump after finishing 13-13 a year ago. They won their first Big East regular-season championship and reached the NCAA Tournament for the first time since 2018.

Kansas: The Jayhawks delivered another solid defensive effort and made enough shots to keep their championship hopes alive.