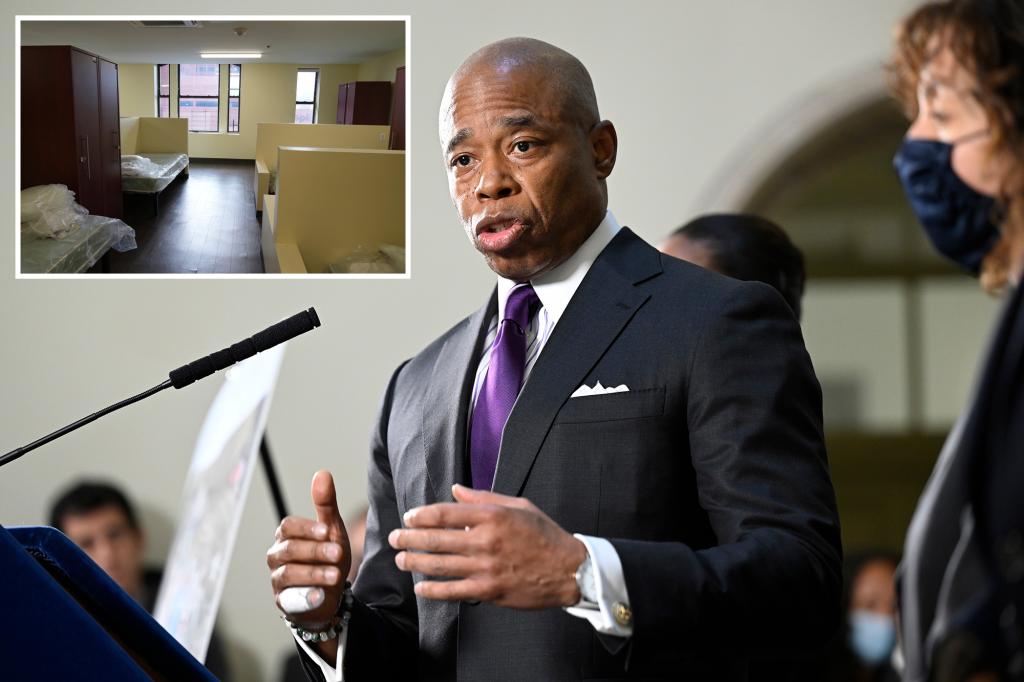 Mayor Eric Adams unveiled a shocking photo of a homeless encampment read with around 500 used syringes as he vowed Wednesday to continue cracking down on makeshift shelters across the city.

“Look at this condition!” a clearly exasperated Adams said during a news conference at City Hall.

“And I’m supposed to act like I don’t see this?”

The unidentified location is among 244 sites where homeless people have been living in public, Deputy Mayor for Operations Meera Joshi said.

Officials cleaned up 239 of them since a multi-agency task force began conducting sweeps around a week ago, Joshi said.

Only five people living at the sites agreed to move into the city’s new “safe haven” shelter in The Bronx, Adams said.

But he predicted many more would follow once they see a new brochure that depicts the rooms there.

Adams pointed to a similar effort to get homeless people off the subways, which only led 22 people to leave the trains during its first week.

That number has since grown to more than 300, he said.

“This is the first inning of our nine-inning game,” the mayor said. “When this game is over, we’re going to have a city that is far better than the dysfunctional city we’ve witnessed for far too long.”

Adams also drew a bright line between his efforts and those of his predecessor, saying, “I’m not sure what he did.”

“That was the previous administration. There’s a new administration and the mayor is not called Bill de Blasio, he’s called Eric Adams,” he said.

Also during the news conference, an NYPD official said the tree-dwelling homeless man who was busted Monday after allegedly attacking a Post reporter and a Post photographer had been hospitalized for a psychiatric evaluation.

Nutty “Squirrel-Man” Rewell Altunaga, 44, returned to his arboreal perch in Upper Manhattan’s Riverbank State Park after being released following his arraignment for the alleged assaults.

But the tarp-covered treehouse was dismantled Wednesday morning and he was put in an ambulance and taken to Harlem Hospital, the NYPD said.

Three other homeless people have also been hospitalized with apparent mental illness amid the sweeps and four people were issued summonses for building structures on public property, NYPD Deputy Chief Brian McGinn said.

The 10 precincts in Patrol Borough Manhattan South had the greatest concentration of homeless encampments — 85 — but there have been no homeless families or children among those evicted during the clean-ups, McGinn said.

In Brooklyn’s Boerum Hill neighborhood, a notice posted by the Department of Homeless Services warned that sanitation workers would clean up around the subway entrance at Smith and Warren streets on Wednesday.

“There is one homeless man who sits by the subway every day,” said the owner of the nearby Smith Street Barber Shop.

“He has no tent or box, he puts things over him — blanket, cardboard. He’s not here, last few days.”