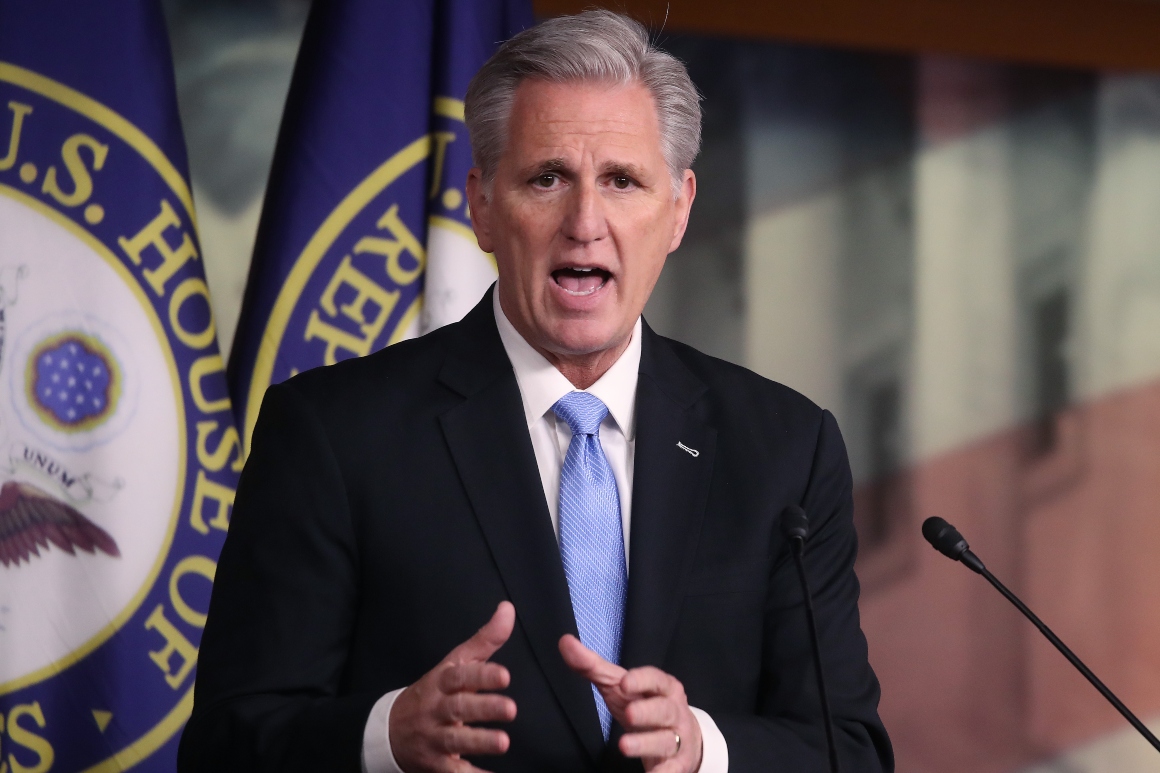 “There’s a lot of different things that can happen. But I just told him he’s lost my trust. He’s going to have to earn it back,” McCarthy said when asked if Cawthorn could face consequences for his actions, including losing his committee positions. “I mean, he’s got a lot of members very upset.”

McCarthy said that, during their private talk, he pointed to “certain things” Cawthorn needed to start doing professionally and in “his own life as well.” And he isn’t discounting more meetings with the freshman lawmaker, saying there “very well could be” more conversations with Cawthorn as GOP leaders assess “what actions are taken” by him.

“You can’t make statements like that as a member of Congress, it affects everybody else and the country as a whole,” McCarthy added.

House Minority Whip Steve Scalise (R-La.) said in an interview that, during their meeting with Cawthorn, the House GOP’s top two leaders “expressed real concern with some of the things that he’s done recently. And obviously, the ball’s in his court in terms of how to respond. But we were very clear with the concerns we had — and a lot of other members too.”

McCarthy had vowed to GOP members behind closed doors that he would have a talk with the freshman about his remarks, POLITICO first reported Tuesday. Scalise also attended the Wednesday morning meeting.

It was a notable dressing down from a Republican leader who at other times has seemed content to leave troublesome members alone. McCarthy was pressured to address another controversy within his ranks just weeks ago, when Reps. Marjorie Taylor Greene (R-Ga.) and Paul Gosar (R-Ariz.) attended an event led by a known white nationalist. McCarthy was less critical about Greene’s behavior, saying he met with the Georgia firebrand on the matter and that she wouldn’t do it again. It is unclear if he met with Gosar.

In addition to the orgy-cocaine claims, McCarthy also cited Cawthorn’s calling Ukrainian President Volodymyr Zelenskyy a “thug” as problematic. Plus, Cawthorn had caused another controversy when he lied to an officer in the Capitol, saying GOP congressional candidate Robby Starbuck was one of his staffers to bring him onto the House floor. Additionally, McCarthy said it’s unacceptable for a member of Congress to be caught driving without a license after failing to show up in court.

And McCarthy had some information for Republican lawmakers who have called on Cawthorn to name names, too. The GOP leader said Cawthorn described the cocaine incident differently than he did in the podcast. Instead of a lawmaker, Cawthorn told McCarthy he believes “he thinks he saw maybe a staffer in a parking garage maybe 100 yards away,” and that Cawthorn told him “he doesn’t know what cocaine is.”

“It’s just frustrating. There is no evidence behind his statements,” McCarthy said.

It may not be Cawthorn’s last meeting on the topic. House Freedom Caucus Chair Scott Perry (R-Pa.) told POLITICO in an interview Wednesday that he plans to discuss the matter with Cawthorn, as more than one of the ultra-conservative members in the group rattle about kicking him out of the caucus. His ouster is still seen as unlikely.

The remarks earned Cawthorn anger and opprobrium across the House GOP, including rank-and-file members who often stay quiet amid big political firestorms.

Rep. Steve Womack (R-Ark.) suggests he won’t be satisfied if the conversation with the GOP leaders ended with a simple promise from Cawthorn that he won’t make comments or suggestions like this again, noting that he has repeatedly caused headaches for the GOP conference.

“Depends on what the outcome of the meeting was,” Womack said in an interview. “If it’s: ‘Hey, don’t do that, again.’ We’ve been there. That hasn’t worked. Frankly, if western North Carolina is not going to fix the problem, then leadership will have to.”