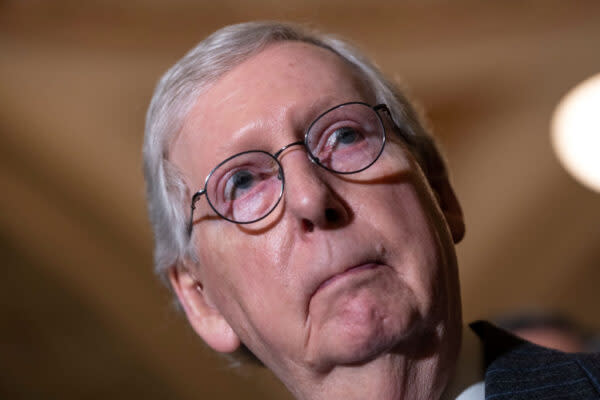 Republican Senate Minority Leader Mitch McConnell of Kentucky has made it known that he will vote against confirming President Joe Biden’s Supreme Court nominee Ketanji Brown Jackson to become the first Black woman to sit on the nation’s highest judicial bench.

As GOP leader in the US Senate, McConnell’s announcement was not a surprise to many, although Jackson most likely will not need his vote. McConnell claimed on Twitter on March 24 that his decision was nonpartisan. Some say it may be because of another bias.

“I went into the Senate’s consideration of Judge Jackson’s nomination with an open mind,” McConnell said in a March 24 tweet.

“But after studying the nominee’s record and watching her performance this week, I cannot and will not support Judge Jackson for a lifetime appointment to our highest Court.”

Jackson was questioned about her voting record and sentencing practices during three days of confirmation hearings. Texas Republican Sen. Ted Cruz drilled Jackson about critical race theory, which Jackson pointed out does not relate to her work as a judge.

Cruz used the children’s book “Antiracist Baby” to ask Jackson if she thinks babies are racist. New Jersey Democratic Sen. Cory Booker applauded Jackson for her resilience and grace during the questioning and her accomplishments. He brought the judge to tears as he highlighted the historical significance of his nomination.

“I see my ancestors and yours,” Booker said. “You have earned this spot. You are worthy. You are a great American.”

McConnell also voiced his opposition on the Senate floor on the last day of the confirmation hearings, citing Jackson’s noncommittal replies about whether she would support a plan to add four seats to the bench. There are currently nine Supreme Court justices. Jackson said the question is beyond “the proper role of a judge.”

“I assumed this would be an easy softball for Judge Jackson, but it wasn’t,” McConnell said. “The nominee suggests there are two legitimate sides to the issue. She tested she has a view on the matter but would not share it.”

Only Congress can expand the court through legislation. Some Democrats have pushed for the change.

McConnell also took issue with Jackson’s lack of published lower court opinions in the last year. Jackson, who has been on an appeals court for only a year, reportedly had published two, while other recent nominees published hundreds leading up to their nominations.

Nearly 6,000 people responded to McConnell’s tweet. It was also liked by more than 45,000 people. A number of people who responded accused the Republican of lying about his impartiality. Several said they were not shocked about his decision.

McConnell argued that it was too close to the November 2016 presidential election to continue the process. Pundits believe McConnell did not want the Democratic president to nominate a liberal.

Many suggested racism was a factor. More than a dozen Twitter users responded to McConnell’s tweet with a picture of him accepting a placard in front of a Confederate flag. The photo was allegedly taken at a Sons of Confederate Veterans event in the early ’90s.

Senate Democrats are reportedly hoping for a full vote for Jackson’s confirmation next month. She needs 51 out of 100 votes to be approved for the bench. There are 50 Democrats and 50 Republicans in the US Senate, and as a wild card, Vice President Kamala Harris has the tiebreaker vote.

Although it is not clear if Jackson will garner any support from Republicans, West Virginia Democrat Sen. Joe Manchin, a key swing vote in the Senate, announced on March 25 his intentions to vote for Jackson, which political pundits said is a strong indication that she will get all of the Democrat vote.