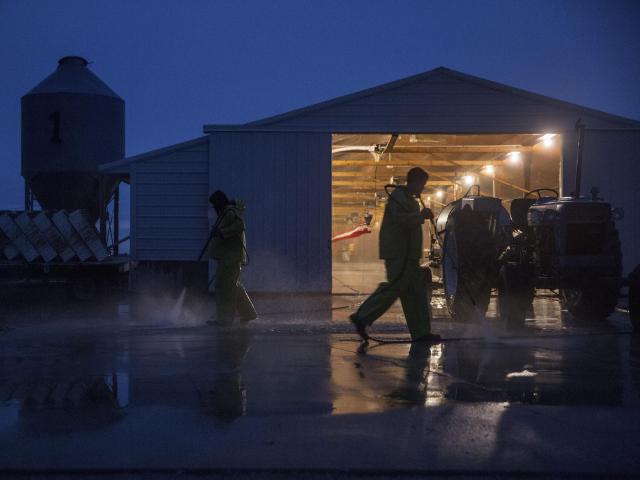 Johnston County, NC — A poultry farm in Johnston County had to preventively euthanize about 32,000 turkeys after a positive sample within the flock. The United States Department of Agriculture has confirmed flu outbreaks in several groups of animals throughout the country.

The turkeys tested positive for High Path Avian Influenza, first at a diagnostic lab in Raleigh and later in a National Veterinary Services Lab in Ames, Iowa.

A spokesperson for the USDA said the turkeys were depopulated to prevent any spread.

“The main reason for depopulating commercial poultry or turkeys is to try and contain the spread because it can spread quite easily,” said Dr. Tara Harrison, with North Carolina State University College of Veterinary Medicine.

The positive sample was the first case of HPAI in domestic poultry in North Carolina.

“With HPAI in the wild bird population and other cases around the country, commercial operators and backyard flock owners have been on heightened watch for any signs of the virus in their flocks,” said State Veterinarian Mike Martin. “The industry responded quickly to the positive result, depopulating the affected flock of 32,100 and starting the composting process of the birds onsite to guard against additional spread. Under HPAI protocols, we will be actively testing other flocks within the 10 kilometer zone or about 6.2 miles in collaboration with our federal and industry partners.”

The 10-kilometer zone includes Johnston County and parts of Wayne and Sampson counties.

The strain’s presence was found in several flocks throughout the country, including:

The 10-kilometer zone includes Johnston County and parts of Wayne and Sampson counties.

Earlier this month, wildlife officials said a hawk in Wake County was among four wild birds to have died from a highly dangerous strain of bird flu in North Carolina. The state said since Jan. 16, more than 100 hunter harvested wild birds tested positive for the Avian flu. Among those who died were a snow goose in Hyde County, a redhead duck in Carteret County, a red-shouldered hawk in Wake County, and a bald eagle in Dare County.

“We’ve been on heightened alert for months about this” said Martin.

This type of HPAI is considered low risk to people according to the US Centers for Disease Control and Prevention, but is highly contagious to other birds, including commercial and backyard flocks of poultry.

“It’s very contagious in chickens, poultry [and] quail but also raptors can get it,” said Harrison.

The virus is also cont considered a food safety threat and infected birds do not enter the food supply.

“The food is safe there,” said Martin. “It’s not contaminated by this virus.”

However, animal experts suggest poultry prices could be impacted if the virus continues to spread.

Harrison suggests that people wash their hands and change shoes to help keep inside bards safe from wild birds.