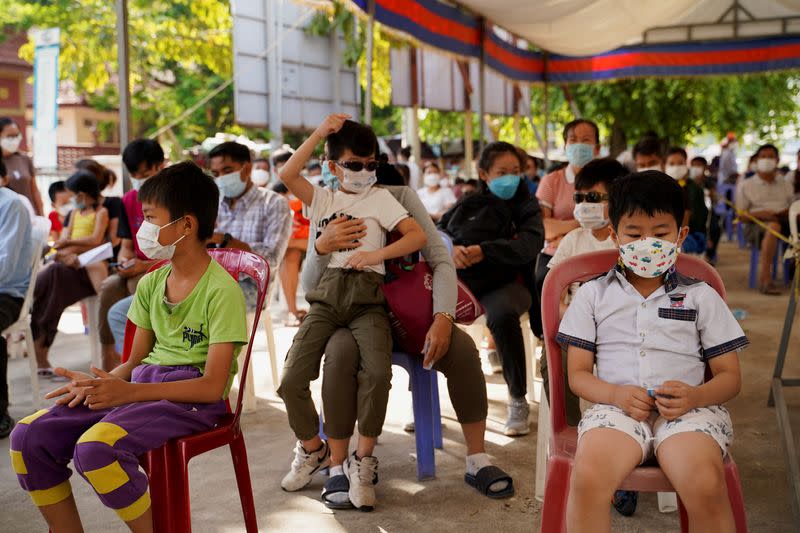 (Reuters) -The following is a summary of some recent studies on COVID-19. They include research that warrants further study to corroborate the findings and that has yet to be certified by peer review.

Most children and adolescents do not have COVID-19 antibodies in their blood after recovering from a SARS-CoV-2 infection, new data has confirmed.

Starting in October 2020, researchers in Texas recruited 218 subjects between the ages of 5 and 19 who had recovered from COVID infections at some point in the past. Each provided three blood samples, at three-month intervals. More than 90% were unvaccinated when they enrolled in the study. The first blood test showed infection-related antibodies in only one-third of the children, the researchers reported online Friday in Pediatrics https://publications.aap.org/pediatrics/article/doi/10.1542/peds.2021-055505/185412 /Durability-of-SARS-CoV-2-Antibodies-From-Natural. Six months later, only half of those with the antibodies still had them. The study was designed to detect the presence of antibodies, which are only one component of the immune system’s defenses, not the amount of antibodies. The level of protection even in those with antibodies is unclear. Researchers found no differences based on whether a child was asymptomatic, severity of symptoms, when they had the virus or due to weight or gender.

“It was the same for everyone,” Sarah Messiah of UTHealth School of Public Health Dallas, said in a statement. “Some parents…think just because their child has had COVID-19, they are now protected and don’t need to get the vaccine,” Messiah said. “We have a great tool available to give children additional protection by getting their vaccine.”

A booster shot of an experimental vaccine being developed by SK Bioscience Co has shown “durable protection” against the Omicron variant in Rhesus macaques, according to new data.

The monkeys had received two initial doses of the vaccine plus a booster 6 or 12 months later. Blood samples from the boosted primates showed “remarkably high” levels of antibodies that could neutralize both the original strain of the virus and the Omicron variant that caused infections to soar, the researchers reported on Sunday on bioRxiv https://www.biorxiv.org /content/10.1101/2022.03.18.484950v1 ahead of peer review. The animals’ second-line immune defenses were also “substantial and persistent,” they said. The vaccine, called GBP510, triggers responses from the immune system by delivering copies of a key part of the spike protein from the surface of the coronavirus. The protein “subunits” are studded onto nanoparticles to resemble the virus itself. These components are supplemented with an adjuvant from GSK that boosts the immune system’s responses, explained Bali Pulendran of Stanford University in California.

“Vaccination with two doses… followed a year later by a booster shot… plus adjuvant, led to highly durable antibody responses and protection against Omicron infection, even six months later,” Pulendran said. Large late-stage trials of GBP510 in humans are underway.

The AstraZeneca antibody shots given to prevent COVID-19 in high-risk children and adults with weakened immune systems do not adequately protect organ transplant recipients from the Omicron variant, researchers found.

The drug, Evusheld, did protect against the Delta variant in kidney transplant recipients, and lab test results released on Monday show Evusheld can neutralize Omicron in mice, including the highly contagious BA.2 version. But among 416 kidney recipients treated with Evusheld after Omicron became the predominant variant, 9.4% developed symptomatic breakthrough infections, with one-in-three of those patients requiring hospitalization, researchers reported on Saturday on medRxiv https://www.medrxiv.org/ content/10.1101/2022.03.19.22272575v1 ahead of peer review. Two patients died of COVID-19. In lab experiments, the researchers exposed the BA.1 version of Omicron that caused the massive winter surge to blood samples from 15 Evusheld-treated patients. None of the samples could neutralize the virus.

The US Food and Drug Administration recently advised https://www.fda.gov/drugs/drug-safety-and-availability/fda-authorizes-revisions-evusheld-dosing that higher doses of Evusheld are likely needed to prevent Omicron infections, and that patients who received the originally approved shots should receive booster doses. The researchers said kidney transplant recipients “should be advised to maintain sanitary protection measures and undergo vaccine boosters.”

Click for a Reuters graphic https://tmsnrt.rs/3c7R3Bl on vaccines in development.